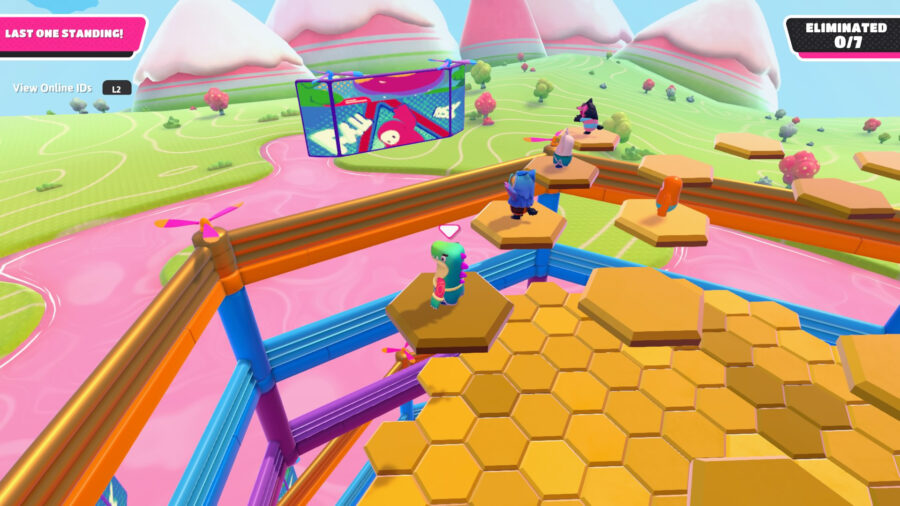 Fall Guys is a game that has exploded in popularity, which has been well earned by how entertaining it is! With over 25 minigames to play against 60 others, it really is a lot of laughs. No doubt, with Season 2 coming shortly, more minigames will appear for all of us to play.

In the meantime, fans are getting rather impatient waiting for an official level editor to appear; while Mediatonic is looking into the possibility of creating one; they are currently focusing on enabling local split-screen and cross play first. Regardless, this hasn't stopped people from creating their own minigames in Fortnite and Minecraft in the meanwhile.

One such fan used Fortnite Creative and has created a mash-up of minigames called "Tumble Lads," which is heavily inspired by levels like Slime Climb and Hex-A-Gone. The creator has made 6 challenges in total, and for those looking for the code, it's: 5361-9496-2479.

Another fan has created a combination of minigames, Tip toe, Hex-A-gone, and the Whirlygig, into one big level using command blocks within Minecraft. It really is remarkable! For those wanting to try this level out, the Google Drive link is here.

I made Fall Guys in Minecraft with Command Blocks from Minecraft

Instead of using Fortnite or Minecraft, why not use something else entirely, perhaps Trials Rising? This one is incredibly special as they have used the level editor with Trials Rising, which is an impressive feat.

Swiss Cheese! I made a second design for a level idea using Trials Rising level editor 🙂 from FallGuysGame

Even Mediatonic lead game designer commented on this post, saying:

"I think this is probably the best fan made level I've seen - it really nails the 'gameshow-ness' of the obstacles and gives players plenty of choice around how brave/risky they want to be be," Walsh wrote on Reddit. "Awesome work."

And finally, once again, back to the world of Minecraft, where YouTube channel Pheonix SC has created their own Fall Guys obstacle course, which looks awesome! The Mediafire link can be found here!

Fall Guys Season 2 is not far off, and Mediatonic will undoubtedly fill us in with what they have planned soon!