Our Forager Guide to How-to Get Bones, Sand, Poop, and Oil will walk you through all the best methods on how to track down these important ingredients for items you'll be looking to upgrade in the game! All of these items will be necessary in your quest to extra every item possible from the world of Forager, and will help upgrade your equipment to the best it can be.

Forager is a game that is all about farming up materials and getting the maximum upgrades on all of your equipment. The items we've listed in this guide are some of the most important ingredients that you will be needing to farm to upgrade your equipment to its fullest potential!

How-to Get Bones in Forager

Bones are an essential ingredient for some of your earlier upgrades for your Pickaxe, Sword, Bow, Backpack, and items that will help increase your attack and movement speed. Bones can be found by killing Skeletons that spawn in the Graveyard biome. This is the land on the left side of the map, you will need gold to unlock these tiles to explore them. Once you unlock a tile on that side of the map, head over there and break one of the Gravestones that spawn randomly. You have a chance to spawn a Skeleton each time you destroy one of these. Kill the Skeleton and loot the Bones!

You will want to immediately upgrade your Pickaxe to the Bone Pickaxe if you are farming Bones. You will get 50% more Bone from killing a Skeleton with it!

Items that Require Bones to Craft

How-to Get Sand in Forager

Believe it or not, Sand is a bit of a pain to farm early on in the game. There's a couple ways to get it, but one is a lot better than the other! The first way, and probably the way you'll end up getting it early in the game is by using Fish Traps. You set these up in the water, and they will eventually catch something. Once they've caught something, you can go interact with them and see what you've fished up. You have a few things that will typically pop up: Sand, Fish, or Seaweed!

That is the most common way to get sand early on, but there's a better way. Utilize the SHOVEL (Farming skill required for crafting)! At first, you might think this is just for planting seeds, but it is actually really good for farming sand. Grab your shovel and head over to the desert biome (you'll need to unlock the right side tiles on the map). Run around this area just holding down dig and you will start bringing up a lot of sand. The key to really farming sand, is upgrading your shovel to the Nomad's Shovel. This shovel guarantees that you will bring up sand every time you dig. Once you've done this, you can dig everywhere and get Sand which is good because you'll want to dig in the different biomes to uncover archaeology items! 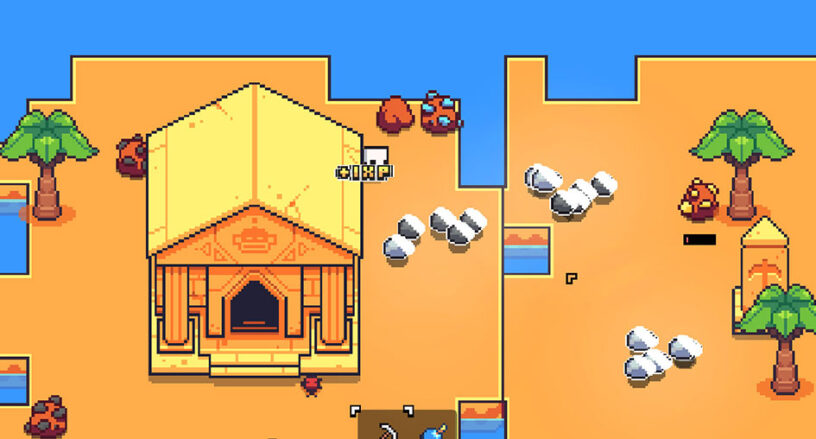 Sand is a particularly important material because you will need a lot of glass later in the game for bottles to catch bugs and store oil. Sand is also used for an item called "Landfill" which allows you to fill in parts of the map that are covered in water. You allow for more spawns this way and can more easily walk around the map.

Items that Require Sand to Craft

How-to Get Poop in Forager

Who would've thought we'd be trying to gather as much Poop as possible in our lives? Well, in Forager it's a valuable ingredient for a couple of items and for completing a particular quest. Poop can be gotten randomly from animals that are running around your map, but this is pretty unreliable and won't yield you as much as we need. The best way to really farm up the Poop is to get yourself a Windmill.

To get a Windmill, you will need to get the Farming skill which is below Foraging and Gathering which are pretty good skills to have anyway. Once you've gotten the Windmill, you can then craft Animal Feed. Believe it or not, this also requires Poop! You will need to have at least a couple Poop beforehand, so make sure you save it. Once you get at least one Animal Feed, find a Cow on the map (they spawn in the grass biome). Give the cow the Animal Feed, and it will pop out a bunch of Poop. Go back to the Windmill, craft some more Animal Feed and repeat the process!

Animals can be a bit hard to find early in the game. In the desert biome there's a Princess that you can help, if you complete all of her quests she will give you a passive that spawns more of them more frequently. This is helpful for farming hides to get leather! You can also craft the potion called "Ana's Delight" that will increase the spawn rate of animals.

You need a whole lot of this for the Fox Person's Quest (found in the winter biome) that requires 500 of the stuff, and it is one of the main ingredients in Landfill which is used quite a bit in the late game to fill in parts of the map.

Items that Require Poop to Craft

How-to Get Oil in Forager

Oil is probably one of the most important late game ingredients that you are going to need to completely max out all of your equipment. There's only one way to get Oil currently and that is through using the Drilling skill that is on the left side of the tree, you'll have to go through Industry, Sewing, Smelting, and Machinery to unlock it (you don't have to do those exact skills, but they are probably the most useful). Once you unlock that skill, you can then build a Offshore Drill. You will need to place this in water, and give it empty bottles to receive the oil (check out our how to farm sand section, you will need a lot of it). 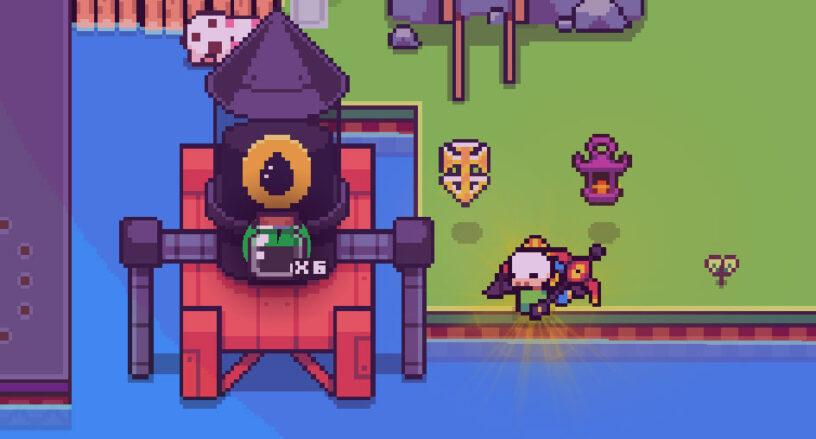 This is a pretty slow process, so try to place it near a Power Plant if possible to speed things up! Oil is used to create plastic which is one of the most important end game ingredients currently, and is required in multiple high end items.

Items that Require Oil to Craft

How to Solve the Graveyard Biome Skull Braziers Puzzle in Forager

How to Solve the Graveyard Biome Dark Bells Puzzle in Forager

How to Solve the Graveyard Biome Colored Pedestal Puzzle in Forager

How to Solve the Desert Biome Eye Statue Puzzle in Forager