Here are all of the challenges from the week 2 of Season 3:

Here's a full cheat sheet for all of the challenges in week 2! Credit to SquatingDog for the image. 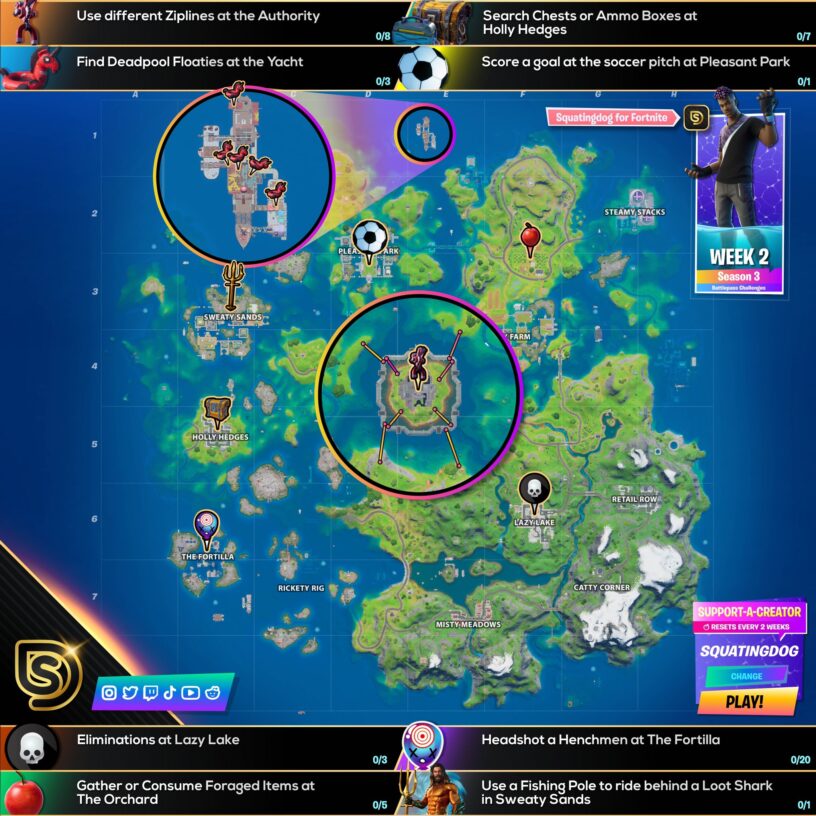 Just like the previous season, make sure you do any henchmen, marauders, or vault based challenges in normal modes because they won't show up in Team Rumble!

Use different Ziplines at The Authority (8)

There are eight total ziplines surrounding the new Authority area on the map. They are pretty much all-around the four corners of the area, which you can find the exact locations in the image below (Credit to LootLake for the image). 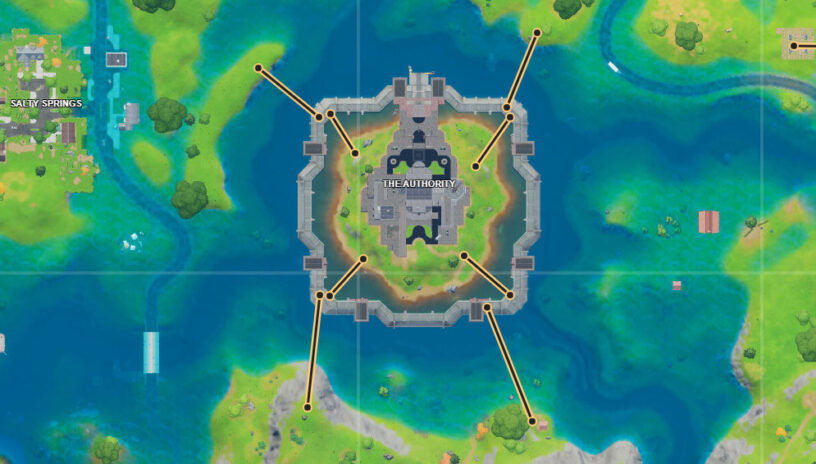 Holly Hedges is on the western side of the map and isn't much different than the previous seasons version of it. Team Rumble is going to make doing this challenge a lot easier, but because you can do either chests or ammo boxes. There's quite a few of each of these that can be found all-around the area.

Find Deadpool floaties at The Yacht (3)

You need to head on over to the unnamed yacht area that is at the very northern point of the map and smack dab of the middle. You can find it in E1 if you want to use map coordinates. Once you've reached the location, you can find four different floaties in the area, but you'll only need to collect three of them! Here's a map to all of the locations, I'll go int a bit more detail below. 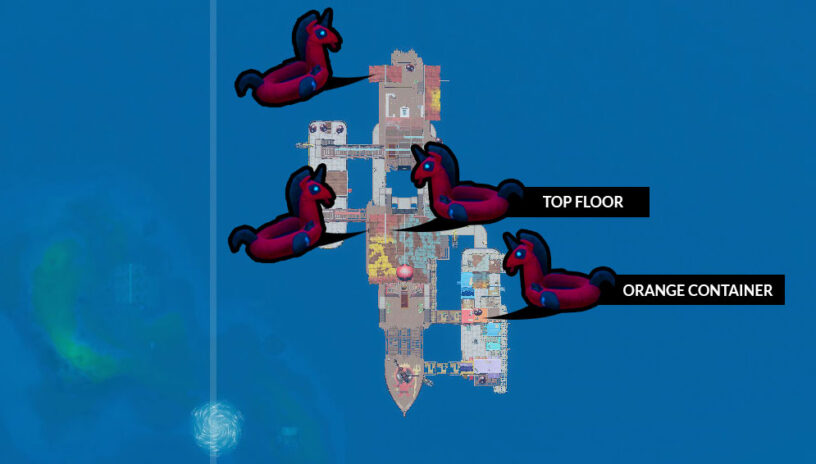 There's a floaty in the orange container that can be found on the barge next to Deadpool's yacht. It's stacked on a couple of other containers, so you can land right inside of it if you fly into the area. You'll find the floaty next to the bed.

At the very top of the main building that now resides on Deadpool's yacht is a room where you'll find one of Deadpool's paintings. In the corner of the room near the door will be the float you are looking to collect!

West Side of Yacht

If you're looking at the map, head to the left side of the yacht on the deck. You'll see a Deadpool themed umbrella, and underneath it you will find yourself another floaty.

To the very northern portion of the yacht area there's a building connected to the boat. If you head inside of it you will find the fourth Deadpool Floaty!

Score a goal on the soccer pitch at Pleasant Park (1)

Up in the northwestern portion of the map is a pretty well-known location in Pleasant Park. In Season 3, the helicopter pad is no longer underground, so the soccer field is now fully operational. Head to the middle of it and you'll find a soccer ball! Run the ball towards the north or south soccer goal and make sure it goes into it. You'll see some little fireworks and ribbons pop out of the goal if you did it correctly! 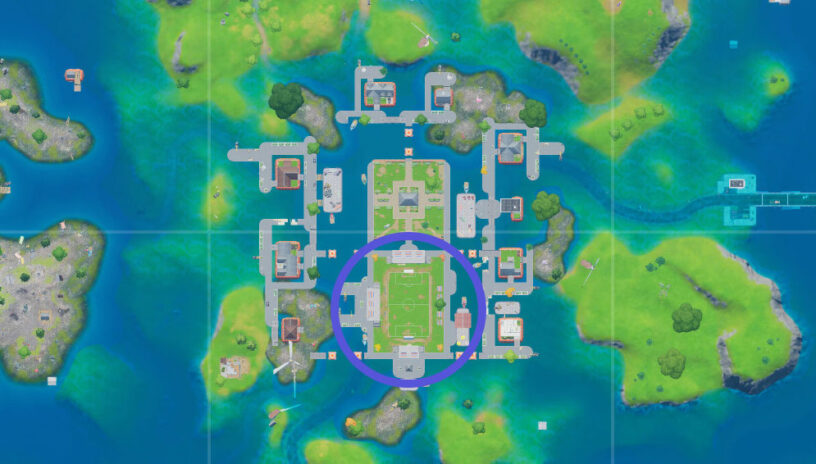 Lazy Lake can be found on the southeastern portion of the map. It's not the lake itself, but the actual named location that's north of it. Get a few eliminations here to finish the challenge. You can do this in Team Rumble and hope the circle ends up on top of it, but it's probably easier to just hot drop at Lazy Lake and try to get a quick elim.

Headshot Henchmen at The Fortilla (20)

The Fortilla can be found on the southwestern portion of the map. It's one of the large new areas that has been added to the game. There's a bunch of Henchmen in this area, so just find a weapon and aim for the head! Also, when you knockdown a Henchman, you should also aim for the head to finish them off because you should get additional credit.

Gather or Consume Foraged Items at The Orchard (5)

The Orchard is located just north of Frenzy Farm, but isn't labeled so you'll have to just know where it is! Look for the farm area with a bunch of trees with a bunch of apples scattered around the ground. You'll also see the Mowdown area just north of it, which is a small dirt racetrack. All you need to do to finish this challenge is to just gather up five different forage-able items. This will likely mostly be apples, but if you find a produce box, those should count towards the challenge as well. You can also likely double dip with this one, because you can gather and then consume the item afterwards! 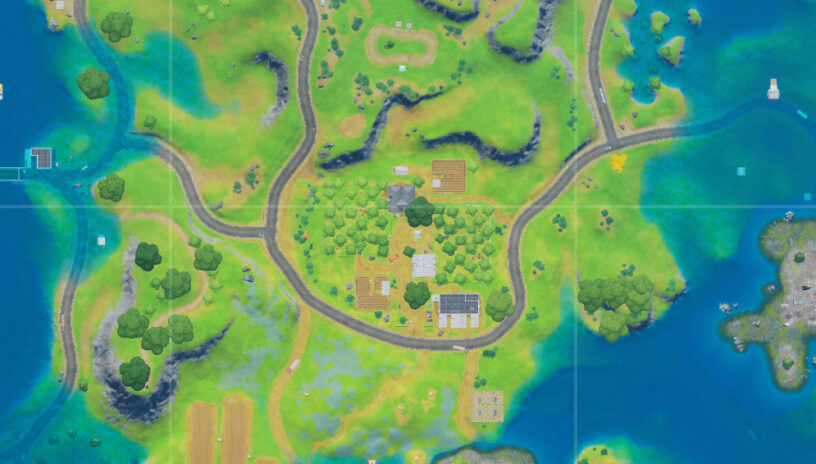