We're taking a look at all of the TNTina's Challenges and how-to complete both week 3 and 4 them in this guide! In Fortnite Chapter 2: Season 2, Challenges are a bit different in that you get a whole bunch of them to complete each week. If you complete at least 18 of these TNTina's Trial Challenges you will get the choice to obtain the Ghost or Shadow style for the TNTina skin! Once you've selected your choice, you will not be able to obtain the other style.

Here's a full list of the TNTina challenges for week 3:

Here's a full list of the TNTina challenges for week 4:

Here's a look at all of the week 3 challenges in cheat sheet form! Credit to SquatingDog for the creation of it. 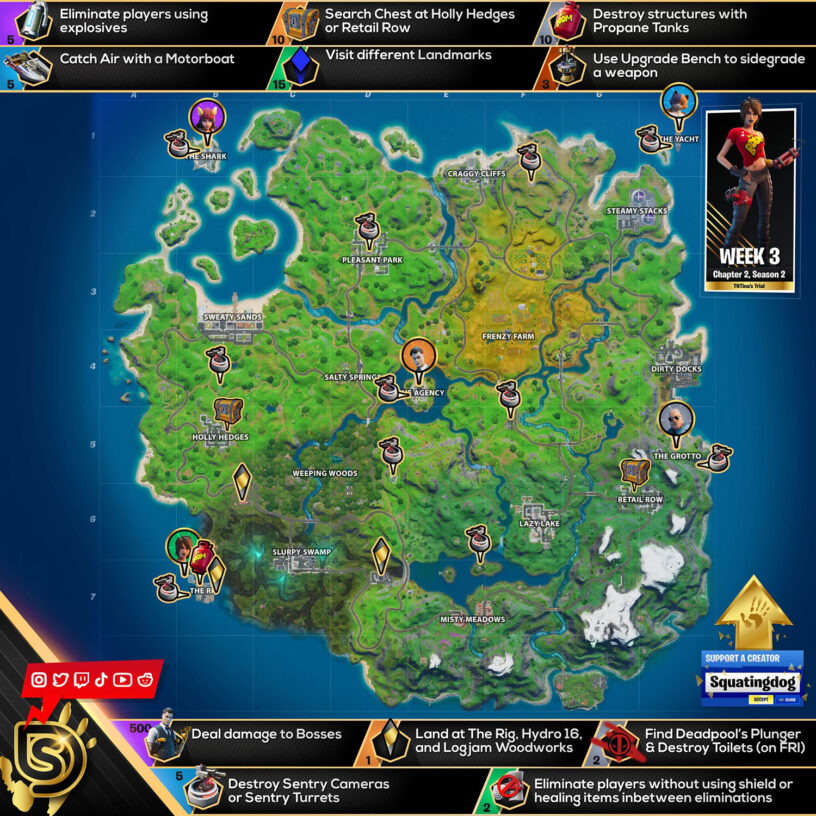 Here's a look at all of the week 4 challenges in cheat sheet form! Credit to SquatingDog for the creation of it. 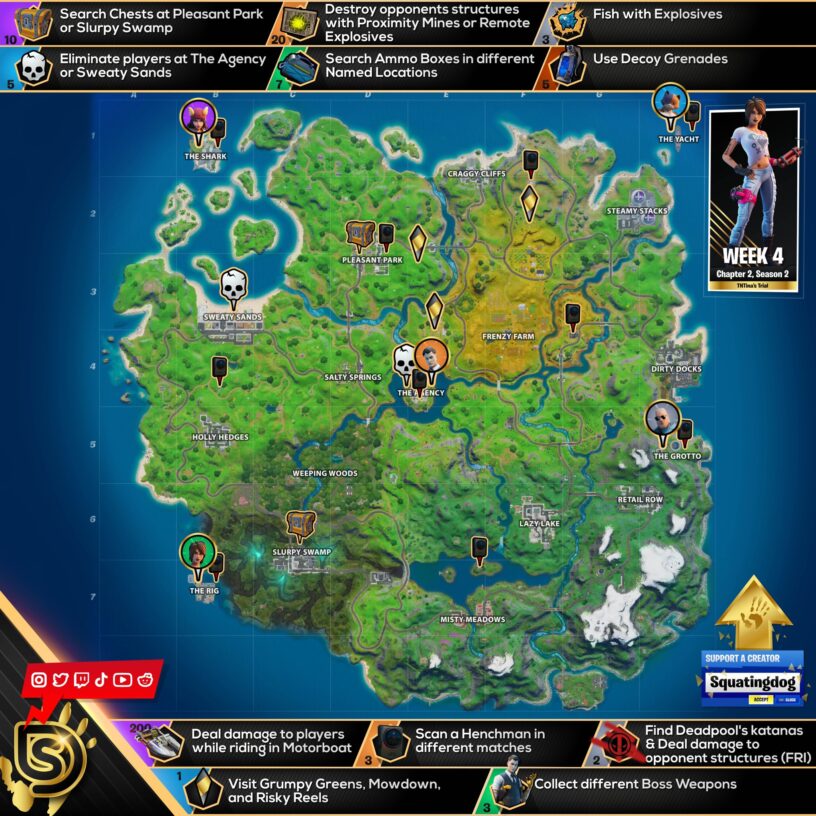 Once you've completed 18 of TNTina's Trial Challenges you will be able to pick ONE of the following styles for the TNTina skin. As far as we know, you won't be able to get the other one so make sure you choose wisely.

You've got various options for this now that there's Proximity Mines available to you. There's also Rocket Launchers and Grenades you can use, but it all just depends on what you can find in any of the games. I'd head on into Team Rumble and try to find any number of  the explosives in there to get eliminations for this challenge.

Either place is worthwhile, but it's generally better to jump into Team Rumble when doing a chest challenge. Go to the place that's further away from where the bus starts out and you will hopefully get the place to yourself. Retail Row is likely to be the more popular location, so head to Holly Hedges if you're hoping for less people.

The Propane Tanks are kind of a story lore thing that goes along with TNTina's character. She can be found at The Rig, which also has a lot of the red Propane Tanks you will need to destroy things with. You can actually pick up these Propane Tanks and throw them where they will bounce and then explode after a short amount of time. It doesn't specify if you need to destroy an enemy's structure or not, so you should be able to build some yourself and get credit for the challenge.

Catch Air with a Motorboat (5)

You can find yourself a boat to the west and east of the Lazy Lake town, all-around Dirty Docks, over at Craggy Cliffs, on the shores around Sweaty Sands. Pretty much everywhere there's water you can locate a boat. Just grab one of these and launch it off a jump or set up a couple of ramps and turbo over it!

Landmarks are just locations that aren't explicitly labeled on the map. You can find just about all of the same Landmarks from last season still on the map. Check out the following map for a ton of different locations you can visit. 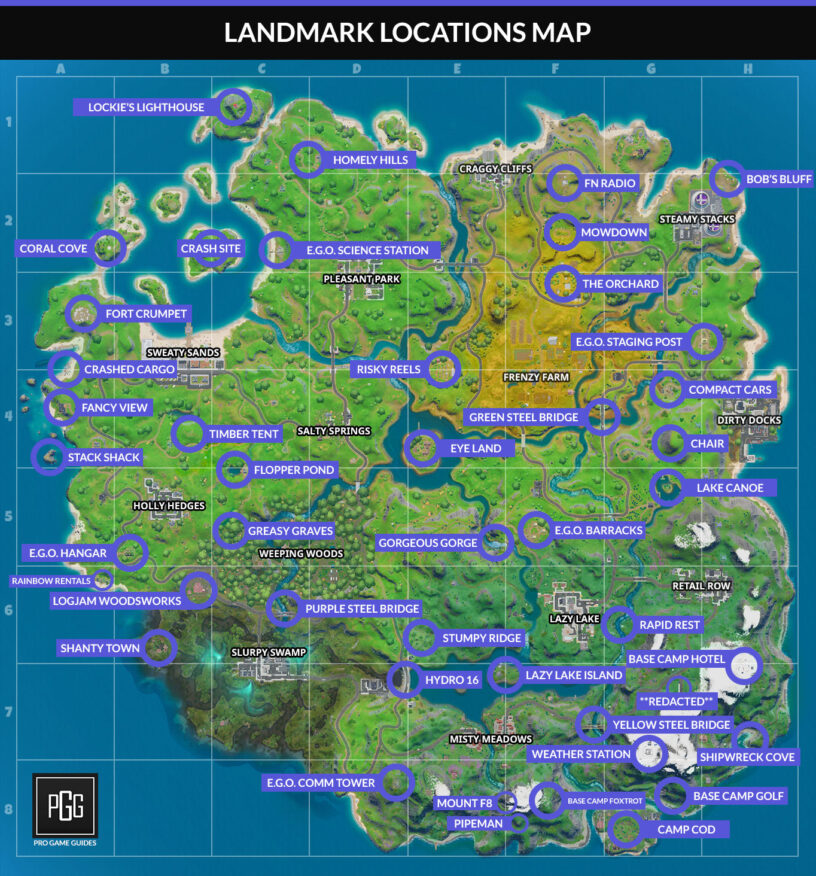 Use Upgrade Bench to sidegrade a weapon (3)

Bring a weapon on over to one of the upgrade machines you can find all over the map. Use the sidegrade option that will change it to a similar but different weapon of the same type! 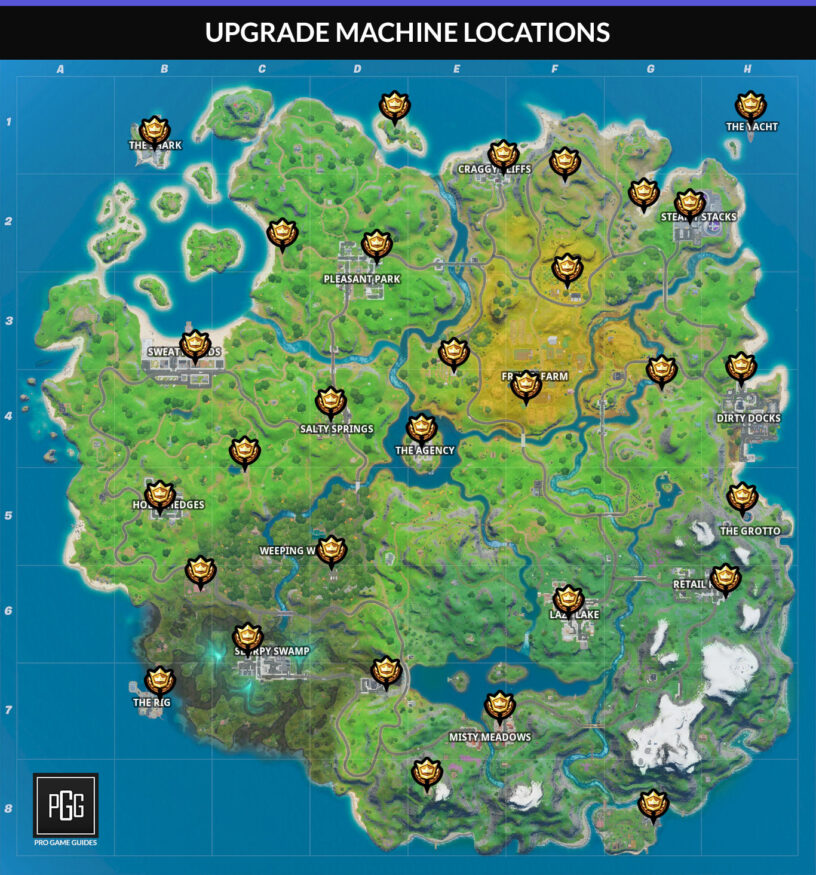 You can find bosses at the new locations: The Shark, Yacht, Grotto, Rig, and Agency. Each place has a boss, you can shakedown one of the Henchmen and look for the red crown icon to locate them. Land some damage on them and you should be able to finish the challenge in a couple of different games. The bosses have higher hp in duos and squads, so you might want to jump into one of those types of mods.

These three locations are pretty close together and you can find a boat directly north from Shanty Town to get to the other locations relatively quickly. You can also land at Hydro 16 and hop down to get a boat that's located at the building below the dam. You can take this to the other two locations. 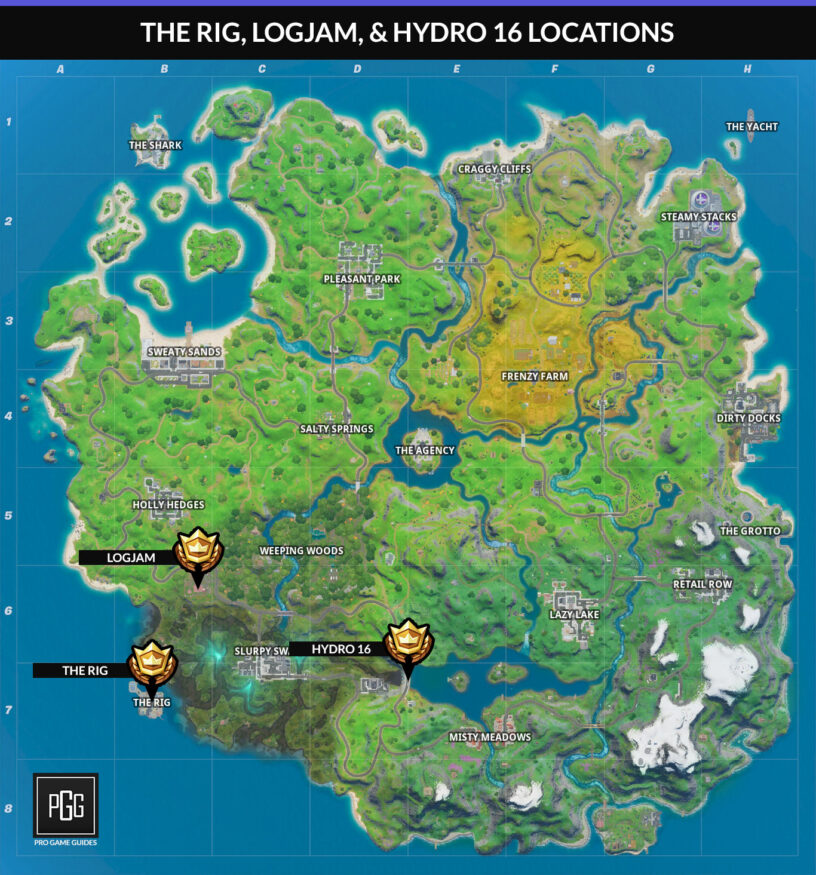 You can find the cameras and turrets at all of the new locations, such as The Rig, Agency, Rig, Yacht, Grotto, and The Shark. Cameras are way easier to destroy, they have less hp and they don't shoot at you! I would only go after the Sentry Turrets if you have some kind of explosive available to you.

Team Rumble is the place to complete this challenge. You can more easily get a couple of eliminations without popping a shield or healing yourself!

Head into Team Rumble for chest challenges because it's likely you'll get an area all to yourself. Either place will work well for the challenge, just head to the one that seems like it's going to be less populated.

This is another good one for Team Rumble because you can find quite a few of these and dump them onto the various structures that have been created throughout the round!

Looks for fishing spots in water areas and throw a Proximity Mine, Remote Explosive, or Grenade onto it and explode it! That's how you can catch some easy fish.

Eliminate players at The Agency or Sweaty Sands (5)

This one might be just easier to head into a standard game of Fortnite and just hot drop at either location. You will have to get lucky and hope for the circle to land on one of these in Team Rumble. It does happen, it's just not going to be consistent.

Any location on the map that has a name listed on it will qualify. Just head to seven different locations and loot an Ammo Box.

Not much to this one, you just need to locate some Decoy Grenades and hurl them at your earliest convenience.

Deal damage to players while riding in a Motorboat (200)

This could be annoying to do, but you might be able to pull it off in Team Rumble. Just locate a boat and head on over to the circle and try to hit people with your rockets. You might get eliminated, but you can always land back on the boat and try again.

Scan a Henchman in different matches (3)

Henchmen are all over the place, but you can most reliably find them and scanner at the new locations: The Shark, Yacht, Grotto, Rig, and Agency. All you need to do is knock one down, pick them up and scan them at a door or chest to get credit.

You can find Grumpy Greens directly east of Pleasant Park. Mowdown is the racetrack area that is north of Frenzy Farm and just north of the apple orchard that's above the farm. Risky Reels is pretty well known to most people, it's to the west of Frenzy Farm and is a drive-in theater with a bunch of cars parked. 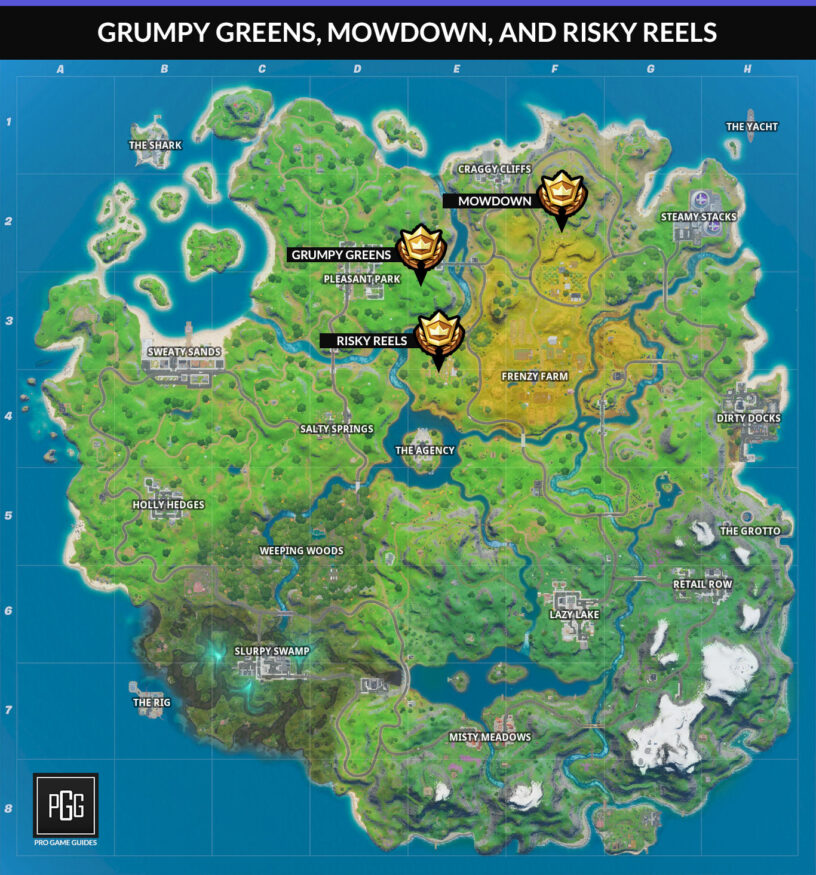 You'll need to do this one in a normal game mode because bosses do not spawn in Team Rumble. To make it easier, try to fly over to the furthest boss location from the bus flight path. You will usually be able to get a location alone, but you might need to fight someone for it. You'll be able to find bosses at all of the new locations in Season 2: The Shark, Yacht, Grotto, Rig, and Agency.