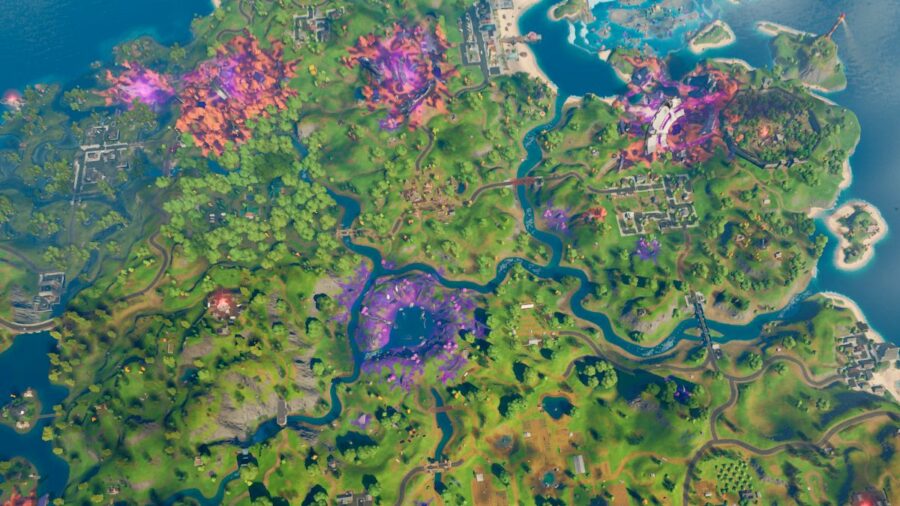 Season 8 of Fortnite Chapter 2 has dropped! And along with it came the Mothership from Chapter 2 Season 7. The new map has a lot of changes, albeit most of them are minor. However, players will have definitely noticed the large chunks of the Alien Mothership that crashed into the island all throughout the map.

We got our hands on the full overhead view of the map, and have the list of all the locations (specifically, the named ones). Thankfully, Fortnite has provided the full map in its files, which you can seen below.

Which the change to the new season, we have a total of 15 Named Locations on the map. Some of the names have been changed, which you can read about in our guide on All New POIs and Landmarks in Fortnite Chapter 2 Season 8. In the list below, we show you every named location on the map.

The most notable change to the map this season is, of course, the decimated areas on either side. What you will find in these areas is a lot of destruction and mayhem from the crashed Mothership. Sometimes, you'll also find rifts that transport you to The Sideways and let you take on waves of monsters. Wherever you go, be careful!

Don't forget to check out our full Fortnite Chapter 2 Season 8 Guide, which covers all updates, mechanics, and features to Season 8!