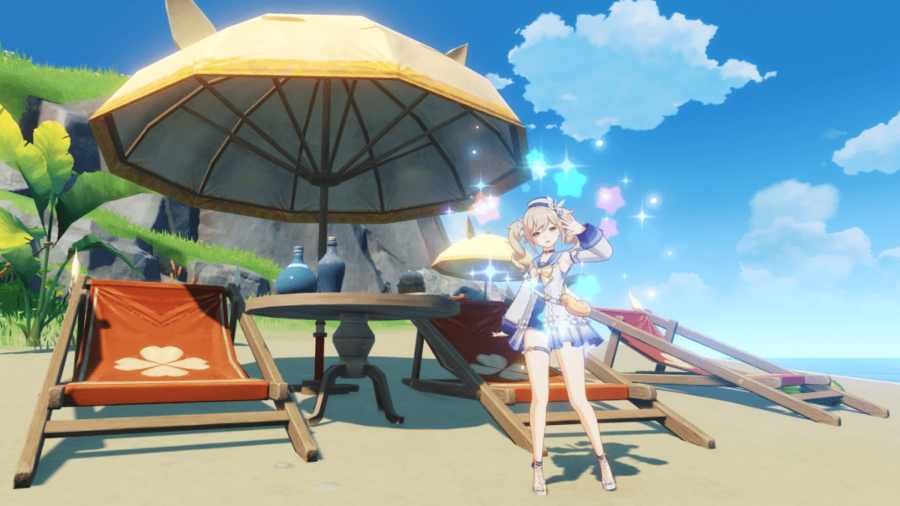 The event-exclusive Golden Apple Archipelago is open to explore until Genshin Impact's 1.6 update run comes to an end around July 21, 2021. Although all kinds of minigames and activities will be released over the span of the next couple of weeks, you can start collecting conch shells for the Echoing Tales questline immediately. So what are you waiting for?

Act II of Midsummer Island Adventure, Summer Vacation: Proceed with Caution unlocks new areas and lots of new Echoing Conches to find. Get ready to sail all over the Golden Apple Archipelago!

The conch is hidden behind some plants on the outermost southwestern edge of this new island.

The conch is inside of the shell-shaped hut.

Teleport to the Waypoint on Twinning Isle and hop down to the level beneath you. Keep an eye out for the ledge with a bird's nest and vines growing up the side, and you'll see an opening in the mountains leading downward. Drop down here and destroy the rocks in your path to find the conch, along with a journal (unlocks the A Trip Through Fog and Wind quest).

Climb up the vines on the side of the mountain to a small ledge containing this conch.

13. "The Outside World," Minacious Isle

20. "The Trapped," north of Pudding Isle

22. "Stone and Phantom," rocks far northwest of the bridge islands

Destroy the rocks inside the cavern to find this last conch.

If you've collected all the conches from days one and two, you should now be able to redeem them for Barbara's Summertime Sparkle outfit!