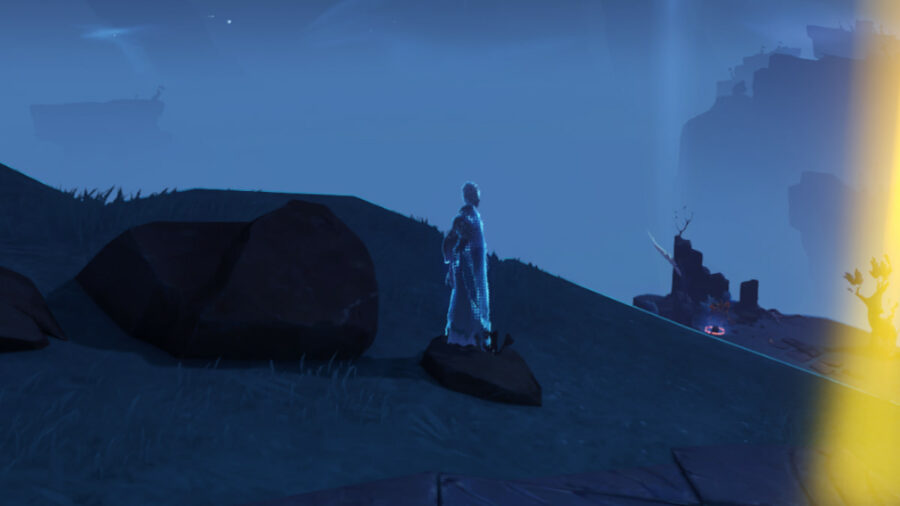 Akashi's Archery Challenge is a Hidden Exploration Objective that you can unlock after completing The Subterranean Trials of Drake and Serpent World Quest in Enkanomiya. Before starting, make sure that your daylight setting is set to Evernight. You also need to have an archer in your team.

Head to the area circled in the image below. You'll find the afterimage of Akashi standing near the edge of a cliff and in front of a large rock.

Speak with Akashi to learn about his musings. He's been undergoing archery training under the watchful eye of the Jibashiri, but the results of his shooting practice have been less than favorable. He's stumped as he's been unable to hit a target and doubts that it's possible at all, so he asks to test your abilities.

A yellow light will shine in front of you, indicating the position where you must stand. A barrier will also shine on a nearby cliff, indicating the location of the target.

Related: Where to find the afterimages of the seven Sunchildren in Enkanomiya in Genshin Impact

Switch to your archer and aim for the barrier. Hitting the ground will get you nowhere, as the trajectory of the arrow you shoot will fall upon reaching a certain point in mid-air. As a result, it's best to aim mid-air, around the area marked with a circle above. This will force the arrow to fall to the ground, completing the Archery Challenge.

When you successfully hit the mark, speak with Akashi and you'll be rewarded a Precious Chest and the Wonders of the World Achievement called Step Right Up!

Unlock another coveted chest by following our guide on How to unlock the Luxurious Chest in Evernight Temple in Enkanomiya Genshin Impact.

Are There Electroculus and Electro Sigils in Enkanomiya

All Seelie locations in Enkanomiya in Genshin Impact

How to complete the Antigonus World Quest in Enkanomiya Genshin Impact