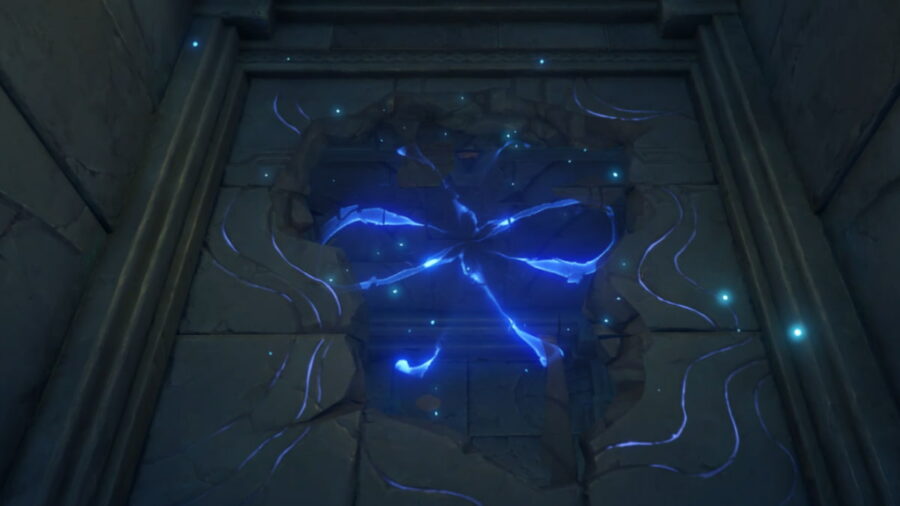 The Bunkoku Enigma World Quest is playable within the Three Realms Offering Gateway event until Mar. 30, 2022. All eligible players who can access the region can, likewise, initiate the World Quest by speaking to Yabe at the Dainichi Mikoshi.

After speaking with Yabe, follow the quest marker to a narrow opening within the area. Head inside the cave-like room, and you'll be prompted to investigate for clues. Interact with the lever on the wall to progress.

After interacting with the lever, leave the room and follow the quest marker upward. You'll encounter another narrow entrance to a room containing a locked mechanism and a Stone Slate puzzle. After the dialogue with Paimon, speak to Yabe, who will prompt you to search for all of the missing Damaged Stone Slates.

Related: Where to find all Damaged Stone Slates in the Three Realms Gateway Offering in Genshin Impact

After obtaining the Damaged Stone Slates, follow the quest marker back to the room and interact with the Stone Slate puzzle to activate the mechanism.

To solve the puzzle, move the Slates by stepping and interacting with them in the exact order as prescribed above. It will create a consistent pattern, with the middle left empty. If you make a mistake, interact with the nearby mechanism to reset the puzzle.

After solving the puzzle, a cutscene will play, and the middle will open up to the floor underground. Jump down to meet the afterimage of Koyanagi. Speak with him, then pick up the Mysterious Stone Slate in front of him.

After, an Enkanomiya Phase Gate will appear in the room. Use it to propel you upward. Insert the Mysterious Stone Slate onto the Stone Slate puzzle by interacting with it. Another cutscene will prompt, and an opening to the floor underground will appear once again.

Before jumping down, prepare a battle-ready team, as a battle against a Vengeful Spirit will prompt as soon as you reach the ground. It behaves like a normal Kairagi, so it shouldn't be much trouble to defeat. After the battle, you'll be rewarded with a Luxurious Chest.

When you're ready, free Koyanagi from his cell by interacting with the lever on the right. Speak with him, then deliver the news to Yabe. Doing so will complete this World Quest.

Check out our guide on All Precious and Luxurious Chest locations in Three Realms Gateway Offering – Genshin Impact to loot even more rare Chests in this limited-time region.

How to complete The Bunkoku Enigma World Quest in Genshin Impact