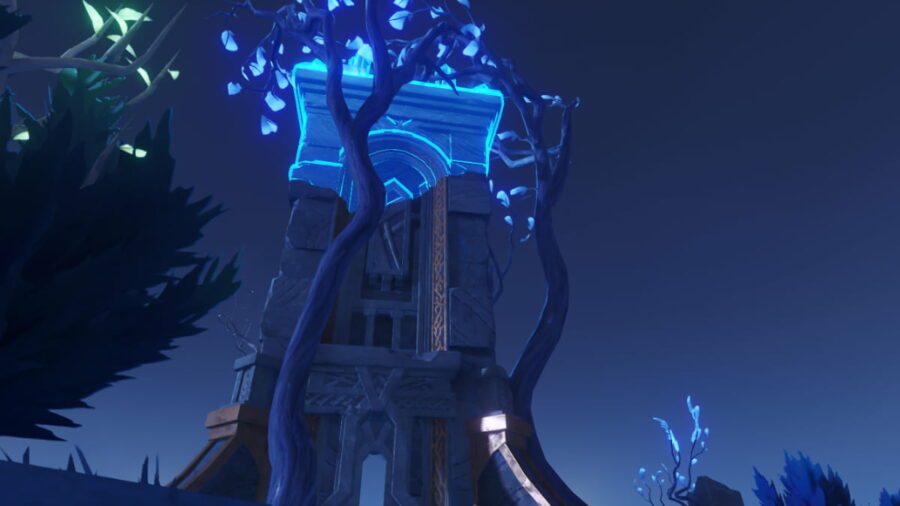 Yachimatahiko's Trial is one of the challenges you need to face to complete the Erebos' Secret World Quest, which can be activated after unlocking the three hidden islands in Enkanomiya. Once you've completed the prerequisite, head to the pool in The Narrows.

The exact location is circled in the map below. Make sure that your daylight setting is set to Evernight.

Once you're there, jump into the school of Ghostfish in mid-air. You may need to use a Geo Construct, use an Anemo Skill, or jump from a nearby landform to reach them.

The Ghostfish will guide you to Yachimatahiko's Locus, which is the once-hidden island on the top left of Enkanomiya. You don't have to click anything as you're being transported.

Upon landing on Yachimatahiko's Locus, you'll encounter the afterimage of Uda. Speak to him to activate the Trial to release all the Flames of the High Gate. The quest markers will guide you to the exact location within the island.

Related: How to complete the Phaethon’s Syrtos World Quest in Enkanomiya in Genshin Impact

Your objective is to touch all four Flames of the High Gate, which are pale blue flames hidden behind locked gates. And to open these gates, you need to activate the triangular mechanisms, which only show up during Evernight or Whitenight.

While still in Evernight, head to the second floor of the ruin and look beyond the day-night switch mechanism. You should see a triangular mechanism, which you can activate with a Normal Attack. This will prompt a stone wall to move, allowing you to access one of the Flames hidden behind it. Interact with the Flame to complete the first part.

Related: Are There Electroculus and Electro Sigils in Enkanomiya

Interact with the day-night switch mechanism to change the environment to Whitenight. Then head to the first floor and hit the triangular mechanism by the entrance to unlock the gate behind it. Enter the gate and turn right, and keep moving until you see the second Flame. Interact with it to complete the second part.

Interact with the day-night switch mechanism once again to change the environment to Evernight. After, jump down and find the glowing triangular mechanism. Attack it once to move the stone wall, allowing you to access the Flame behind the locked gate. Interact with it to complete the third part.

Interact with the day-night switch mechanism once again to change the environment to Whitenight. Head to the second floor and climb up the tallest pillars, which will allow you to be eye-level with the yellow Shield-Lights. Typically, you need to be in Evernight to get past these barriers. But your goal isn't to go past them but to jump and glide to the top of the Shield-Lights, which you can safely step on.

Keep in mind that while you can step on top of the barriers, you can't climb them. So if you misstep and fall, you need to climb the stone pillar and glide to the barriers again. This will allow you to interact with the fourth and final Flame.

Once you're done with all four, switch back to Evernight so you can turn in your progress to the afterimage of Uda and complete this Trial. You'll be rewarded with the Wonders of the World Achievement called "Extensive and Meticulous."

Complete another part of this overarching World Quest by following our guide on How to complete Kunado’s Trial in Enkanomiya in Genshin Impact.

How to complete Yachimatahiko’s Trial in Enkanomiya in Genshin Impact