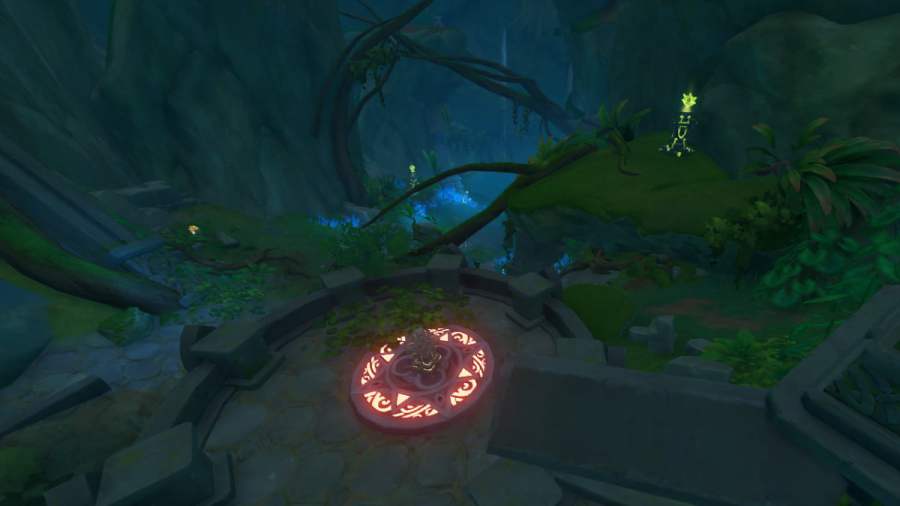 Upon paying a visit to the Teleport Waypoint west of the Vissudha Field's Statue of the Seven, you'll find it submerged underwater. To unlock it, you need to drain the water level in the area by solving a Dendro Monument puzzle.

Start by heading to the Statue of the Seven in the Vissudha Field, then glide to the area circled in the image below. Be careful not to glide toward the water—head to the top of the waterfall and turn right to find a locked mechanism, a Seelie, and two Ruin Sentinels.

Defeat the Ruin Sentinels to unlock the mechanism. Interact with it to drain the water level halfway. You can ignore the Seelie and directly head to the cave on the left. Follow the path forward until you enter a huge cavern with some Dendro Monuments scattered around the area.

First, turn left to find a Dendro Monument hiding inside an arched entryway. Use any Dendro attack to activate it. Next, climb toward the Dendro barrier with Treasure Hoarders surrounding it. To the left of the structure, you'll find a Four-Leaf Sigil that you can use to propel yourself upward, revealing a small hole that you can use to enter the blocked room. Once inside, activate the second Dendro Monument to disperse the barrier.

Next, jump down until you're right by the water. Use any Dendro attack on the rock covered in branches, forcing the branches to grow and reveal an Auspicious Branch underneath. Interact with it to summon Dendrograna.

Once that's done, use the Dendrograna to attack the rock with a green core in front and behind you. One will reveal a third Dendro Monument—light it up immediately. The other will summon enemies and open up an entrance. Defeat the enemies and go through the entrance to return to your starting position, right in front of the locked mechanism.

Turn right to find one more rock with a green core. Attack it using Dendrogranum to reveal the fourth and final Dendro Monument. Light it up to unseal the locked mechanism.

Interact with the mechanism to fully drain the water level in the area. Now you can head to the Teleport Waypoint's location on foot and unlock it!

Check out our guide on How to complete the Energy Extraction Device Challenge west of Port Ormos in Genshin Impact to solve more exploration objectives in Sumeru.