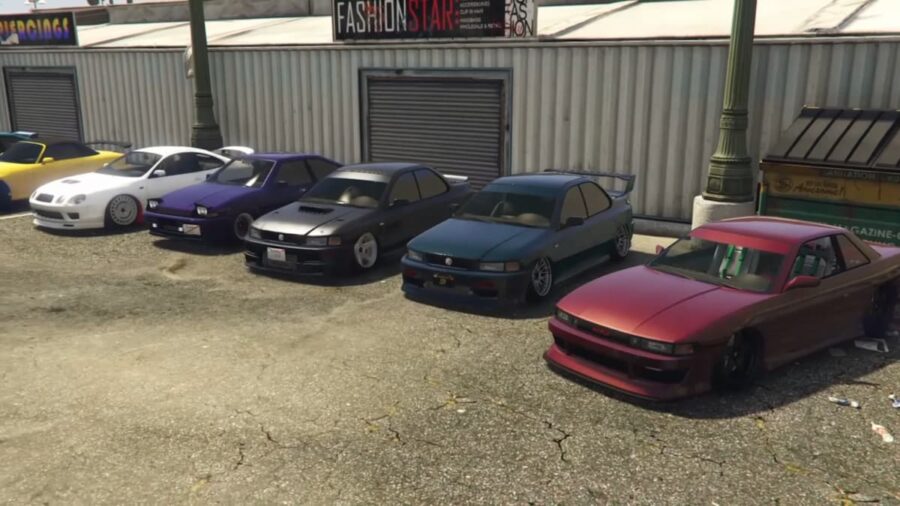 With GTA Online expanding the world, the developers have added tons of new vehicles in the game. Some of the most popular cars are the ones inspired by real-life JDM (Japanese Domestic Market ) cars. These are cars that are exclusively designed for, as the name suggests, the Japanese market. The boom in the JDM vehicles craze can be credited to the customizability these cars offer, allowing drivers to fully express themselves through their rides.

With the introduction of a variety of updates and DLCs, GTA Online added a variety of JDM vehicles in the game for players to buy (or, steal). With updates like After Hours and Los Santos Tuners, to name a few, the game introduced many cars that are inspired by real-life JDM icons. Here is a round-up of some of the best ones.

The Elegy RH8 is one of the fastest cars in the game. Not only that, but it also comes free, as long as players have Social Club linked to their accounts. The design of the RH8 draws inspiration from the Nissan GTR R35. It handles well, accelerates fast, and comes with tons of customization options. Much like its real-life counterpart, this car is an absolute beast, and can easily take on supercars which can often cost a lot more.

The Jester is very obviously inspired by one of the holy grails of JDM sports cars—the Toyota Supra Mk4. This car was first introduced in the game as part of the After Hours update. It has a crazy list of modifications that a player can choose to buy, to stand out in meets. The only drawback of the Jester is that it is limited in top speed, as compared to other JDM cars in the game.

The Calico GTF was included as a part of the Lost Santos Tuners update. The design of the car is heavily influenced by the sixth generation Toyota Celica. Powered by an inline 6 cylinder delivering power to all 4 wheels, owing to its AWD set-up, this car accelerates like a bat out of hell. Not only that, but it also handles corners very well.

The Sultan is one of the oldest cars in the GTA series, having made appearances in multiple franchises of the game. The Sultan RS is a modified version of the Sultan in GTA V. It is one of the most heavily customizable cars in the game, and comes with bonkers acceleration and a decent top speed. The design is an amalgamation of many JDM cars, most notably the first-generation Lexus IS and the Mitsubishi Lancer.

The Futo GTX might not be the fastest car in the game, but it is absolutely adored by JDM fans. It is exclusively inspired by the Toyota Sprinter Trueno AE86, which was the poster car for fans of Initial D. Where the Futo GTX lacks in top speed, it makes up for its supreme drifting capabilities around corners.

Another car that was introduced with the Los Santos Tuners update, the Annis Remus is based on the Nissan Silvia S13. It has good acceleration and top speed handles well and has substantial amounts of grip. The exhaust note of this car is also one of the best, and it cracks and pops when starting from a standstill. It is also one of the most customizable cars in the game, with lots of options.

The Penumbra FF is not the fastest car in the game. It does come with an AWD system, which means it accelerates pretty quickly from a standstill. However, JDM fans will instantly recognize the iconic design of the car, which is inspired by the Mitsubishi Eclipse. The Penumbra can be heavily tuned, with tons of customization options. Fans of Fast & Furious will also recognize the car as being the green car that Paul Walker drove in the film.

The ZR -350, with its iconic pop-up headlights and melting-cheese design, is unmistakably reminiscent of the iconic Mazda RX-7. This car has good top speed and acceleration and handles very impressively. A bit of stance, paired with low-grip tires, makes it a drifting beast. It comes with a variety of customization options, so players can choose to go all out with their builds or keep it clean and subtle.

Looking for more GTA content? Check out the rewards you get from a GTA+ membership for GTA Online, right here on Pro Game Guides.