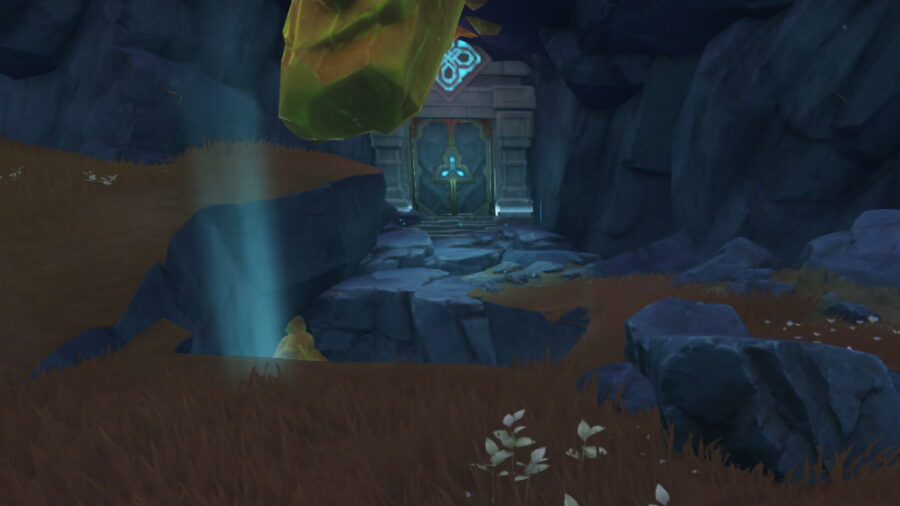 The Lost Valley houses the Domain of Blessing: Machine Nest, which rewards players with Vermillion Hereafter and Echoes of an Offering Artifacts. It's located in the Fuao Vale in The Chasm, and you need to complete a Geo Construct resonance puzzle to unlock it.

Start by heading to the area circled in the image below. Consider switching the Traveler's Element to Geo beforehand, as their Elemental Skill is useful in this puzzle.

Once you get to the area, you'll encounter a rock with a Geo symbol. To destroy it, you need to use the power of Geo Construct resonance. Essentially, you need to line up three Geo Constructs within specific proximity from each other, one of which will act as a trigger for all Constructs to resonate.

Related: How to activate Pressure Plates in Genshin Impact

After, run to the giant rock behind the Pressure Plate, and place a third Geo Construct in the position prescribed above. This Geo Construct will trigger the resonance, pulsating toward the rock in front of it, which will then pulsate to the two Geo constructs and then to the rock with a Geo symbol.

After the rock with a Geo symbol breaks, simply head inside the cave behind it to unlock The Lost Valley Domain.

Check out our guide on How to destroy all Bedrock Keys in the Surreptitious Seven-Star Seal Sundering World Quest in Genshin Impact to aid your Chasm exploration.