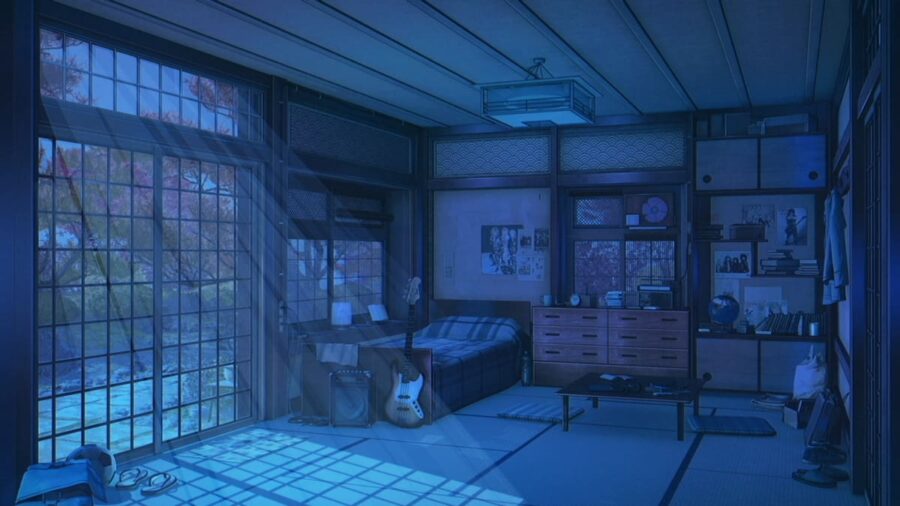 Visual Novels like Love, Money, Rock 'n' Roll put a lot of importance on setting and characters. This is because, like a regular book, Visual Novels are trying to communicate a story more than they are interested in making complex gameplay. The setting of Love, Money, Rock 'n' Roll is the 1980s in Japan, a setting that definitely affects the characters and their experiences.

Love, Money, Rock 'n' Roll takes place in the 1980s. This is evidenced by a lot of the technology seen around Nikolai's house, as well as outfits worn by characters outside of school. When the scenes change within LMR, we get to see more specific timing. The game starts with the player in Aug. 1987, where the characters are attending school at the beginning of the final school year of High School.

The game's protagonist, Nikolai, is born in the Soviet Union around 1970. At seven years old, his parents moved the family to Japan. Now, as a senior in high school whose parents are dead, Nikolai lives by himself. His childhood friend, Himitsu, lives next door.

LMR takes place in Tokyo during the late 1980s. Most of the time, the player will be at Nikolai's home or the High School. Both of these are in an unspecified suburban district of Tokyo. When Nikolai and others travel into the city, they are usually traveling to an unnamed central district within Tokyo. The area Nikolai lives and attends school in seems somewhat affluent, evidenced by his many wealthy classmates.

Related: Who are the main characters in Love, Money, Rock’n’Roll?

There are several different locations that Nikolai bounces back and forth from in LMR. These are mainly his house, his High School, and the city. We've broken down each of the venues and their sublocations to help you familiarize yourself with the specific setting of the game.

The protagonist's house is where we start when first playing LMR. It is the base location that Nikolai will continuously return to after more exciting scenes in the story. Locations the viewer will often see inside Nikolai's home are:

Nikolai is finishing up his final year of High School, so it makes sense that a school would be a routine location. This is where most of the characters are introduced. It is also where a lot of the deeper plot setup prior to bigger events happens. The most common locations within the school that the protagonist goes to are:

Outside of the school, the city (Tokyo, specifically) is where Nikolai will often meet with the rest of the cast. These are especially where a lot of the more emotional, introspective, or intense aspects of the story occur. Some locations you'll encounter within the city are:

What is the setting of Love, Money, Rock ‘n’ Roll? – Time and Place Guide