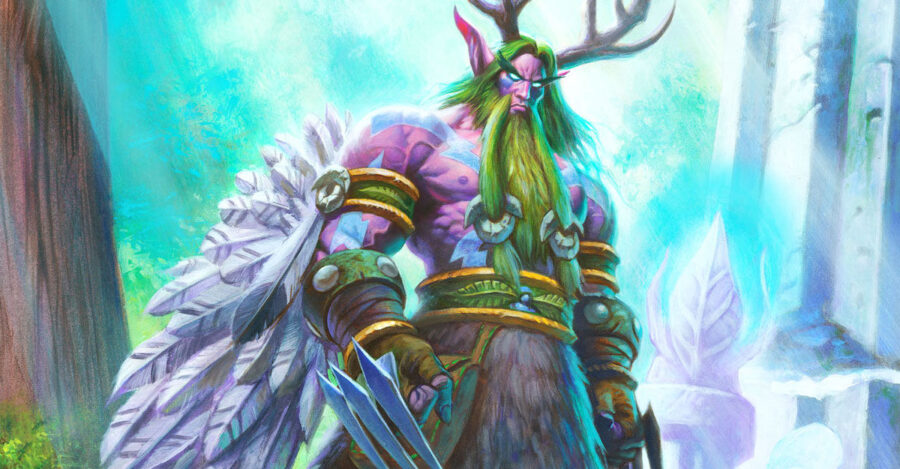 Druid is one of the more versatile classes in Hearthstone with a pretty balanced hero power and quite a few different archetypes at its disposal most of the time! In this post, we'll be taking a look at the top meta Druid decks that you could be playing with in the Scholomance expansion. The class got some new stuff to try, so there's some interesting options to now bring to the standard or wild ladder.

Druid has been one of the more powerful classes throughout the history of Hearthstone. It was fairly controversial in the early days due to its ability to ramp its mana up, which allowed for the class to play higher cost stuff a lot sooner. This also included strong card draw and the ability to combo big damage out of hand. A lot of these cards were nerfed, but Druid still has the ability to accelerate its mana total with cards that have been added in newer expansions. The class has also been a common place to find decks that flood the board with tokens! These lists were usually more aggressive, because of some of Druid's board buffing spells.

The best decks for Druid in Hearthstone right now are Guardian Druid, Malygos Druid, and Gibberling Druid! These are quite popular in the meta, and the archetypes of Guardian and Malygos share quite a few cards. That means you can alter the deck back-and-forth if you happen to have the additional cards. The Gibberling deck is your more standard aggressive token list that widens the board and overruns your opponent! 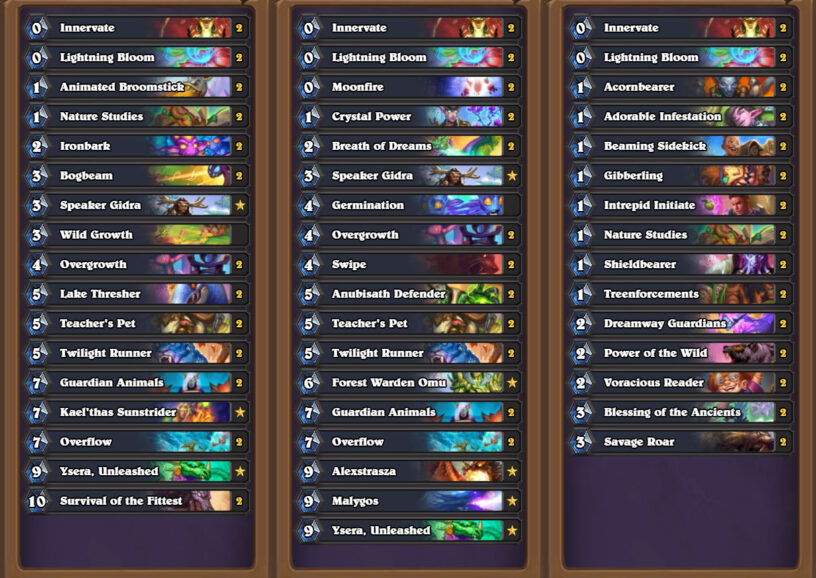 Guardian Druid is looking to take advantage of Survival of the Fittest, Guardian Animals, and Twilight Runner. This combination will give you two 9/8 Beasts with Stealth on them onto the board. This is very hard to deal with for your opponent, so you can usually knock them out of the game if you can pull this off. You've also got powerful possibilities with Speaker Gidra, who can get buffed pretty heavily with the high cost spells you're running in this deck. The new ramping abilities you have with Lightning Bloom also stand to make things crazy. Kal'thas Sunstrider can also really make things interesting, although a bit less interesting now that he was nerfed.

While Malygos and Guardian Druid decks share cards they are looking to win quite a bit differently. You are unlikely to overrun your opponent with minions in this version of the deck, but rather you are going to burn them out with cheap spells and being able to get the Malygos on the board. It does share the ability with Guardian Druid to get some big beasts out, but that is not going to be your primary win condition.

This is a fast aggro deck that dumps a whole bunch of cheap minions on the board and looks to buff them up with Power of the Wild, Blessing of the Ancients, and Savage Roar. Decks like this have been popular in the past with Druid, so it's not a big surprise to see another one. The big thing that sets this apart is the card of Gibberling, which can be Spellburst and have the minion that it Spellburst out be burst again and so on. This gives you a lot of ability to create cheap board-states that can be easily buffed.

Wild can be a bit difficult to predict, so here's a look at some decks that have been successful on the Wild ladder. You will find that the meta of Wild doesn't fluctuate as much as Standard does when a new expansion is released. This generally only happens if one Standard deck in particular is very dominant. Normally, you will notice that just the most powerful cards out of the set find their way into decks.

Well, if you thought Pirates weren't able to infiltrate into every class then you can think again! They have landed on the shores of the Druid class and they just can't help but take advantage of them. This is a weird amalgamation of cheap ramp, minions, and spells that can eventually do enough damage to take you out of the game. It might not be pretty to look at but it sure is effective!

The Wild version of Malygos Druid didn't get a whole lot in the new expansion, but Lightning Bloom is a powerful card, especially in a deck which wants to get late into the game like this one. Nature Studies is also a nice pick-up, and could work well to pump out additional spells from Malygos.

That's all of the top meta decks for Druid right now in the Scholomance Hearthstone expansion! We'll be adding more lists in the future as things are discovered and new cards are released.