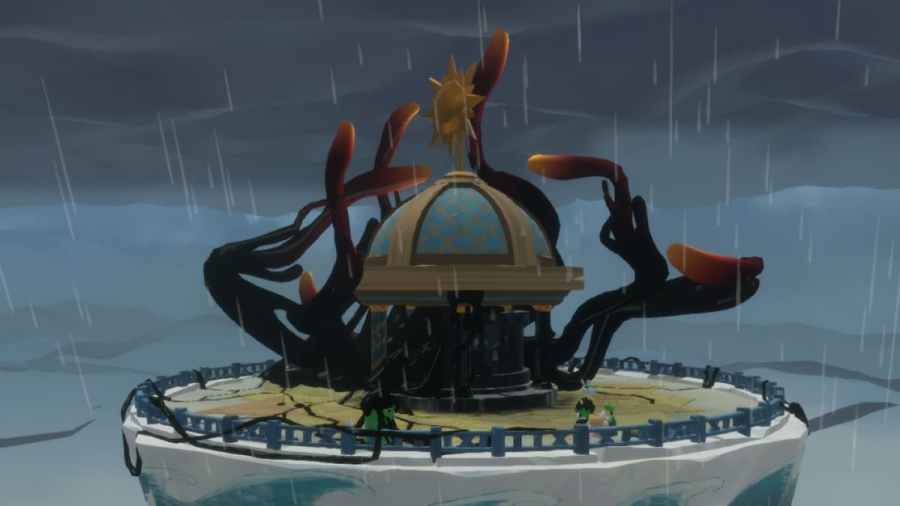 Mario + Rabbids Sparks of Hope's tactical combat throws many challenges at you, but few compare to its bosses. After defeating the Giant Wildclaw, you will face to face with the Darkmess Tentacle of Beacon Beach. Below is a list of tips and tricks and the best characters to defeat the Beacon Beach Darkmess Tentacle in Mario + Rabbids Sparks of Hope.

To defeat the Darkmess Tentacle in Mario + Rabbids Sparks of Hope's Beacon Beach, you must destroy all 11 of its eyes. The most important thing for this fight is to ensure you have Rabbid Luigi on your team. He should be the primary character taking out the eyes while your other characters protect him from the minions on the map.

You can use the Bob-ombs in your path to take out the Darkmess Tentacle's eyes or use them to defeat the minions. We recommend using them on the minions, but throwing them at the eyes is a great way to speed up their destruction. Move forward and use Rabbid Luigi's Disrupter to take out multiple eyes each turn.

Related: How to sprint in Mario + Rabbids Sparks of Hope

The best option is to keep Rabbid Luigi between your two characters, one to clear the way ahead and the other to prevent any enemies who spawn behind from attacking you. When you are not currently facing any minions, you can use your other characters to defeat the eyes.

Be careful of grouping up, as many enemies can inflict fire status on you, causing your characters to potentially run into one another and set each other on fire. As long as you carefully move up and take out the minions in your path, Rabbid Luigi can make short work of the Darkmess Tentacle.

Rabbid Luigi is hands down the best character for the Darkmess Tentacle, especially if you upgrade his Disrupter to hit multiple foes. He can easily take out 4+ of the Darkmess Tentacle's eyes in one turn. Mario and Peach are also good, as they also strike multiple eyes. Finally, Rabbid Peach is a good character for this boss fight for her healing ability and the fact she can hit minions behind cover.