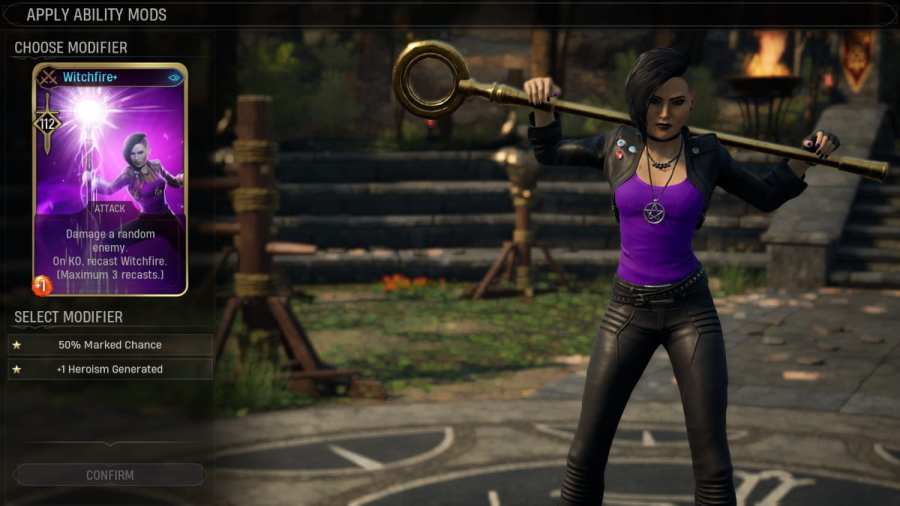 While much of the fun of Marvel’s Midnight Suns comes on the battlefield, tailoring your favorite heroes to meet your battle needs is a fun sideline to the main action. You’ll be taking three heroes into every battle, each of which will have a growing number of cards to choose from to fill out their personal decks. Once you get to around the 20-day mark, you’ll start to get the option to modify some of these cards. Here we’ll talk about how to unlock Mods in Marvel’s midnight Suns.

Modifying cards is done at The Forge by interacting with the Anvil in The Abbey. You’ll need to research Blood, Sweat, and Tears here, which is a level six research project (hence while you’ll need to wait until around day 20 to have it available). To unlock it, you’ll also need to have completed six combat missions with Blade. Once the research project is complete, you’ll receive a Yard Upgrade called Crucible. This costs 300 credits to build at The Yard but once done you’ll then be able to modify certain cards.

Related: Marvel’s Midnight Suns – All Trophies and how to obtain them

To do so, go to The Yard (where Blade often stands, outside the west exit of The Abbey by the training ground). Interact with the sword in the stone and choose Yard Upgrades. Add The Crucible, which will make Apply Ability Mods available in the menu. A card must be upgraded (by merging two copies of the same card) before you can mod it.

Applying ability mods costs both credits and the appropriate essence for the type of card being upgraded. Once you’ve paid the cost, you’ll get a choice of modifiers to apply. Once a card is modified, it will show with a gold star in the top left corner. You can later pay again to change any modifier added, and you may also have more choices when you do so. But each card can only have one Mod.

Loving Marvel's Midnight Suns? Check out more guides here at Pro Game Guides including Midnight Suns Hangouts – Best Hangouts for all Heroes and How does the Offering Bowl work in Midnight Suns.

How to unlock Mods in Marvel’s Midnight Suns