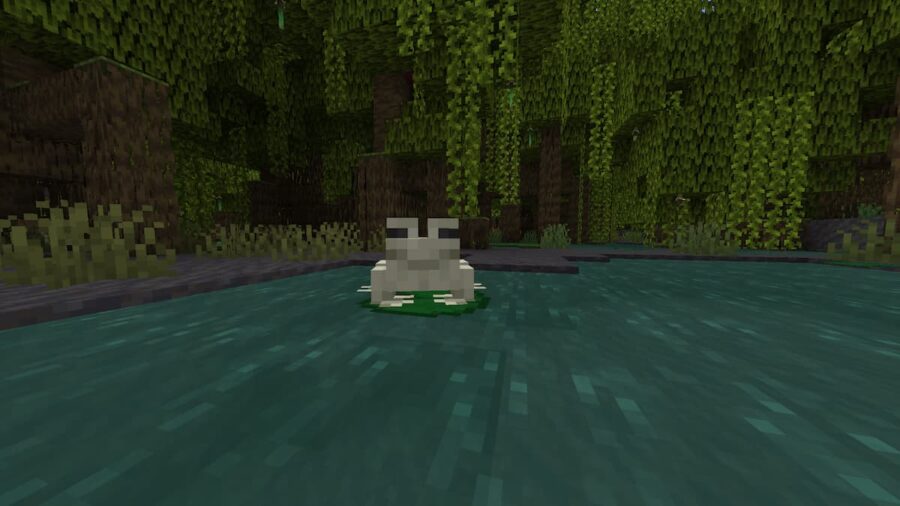 The Minecraft Wild update brought with it a daunting new mob known as the Warden, but it also added a much smaller mob that can be easy to miss. The humble Frog may not have the jaw-dropping stature of the Warden, but what it lacks in size, it makes up for in personality. Here is everything you need to know about the Frog in Minecraft.

Everything to know about Frogs in Minecraft

What are Frogs in Minecraft?

Frogs are a passive mob that was added with the Minecraft 1.19 update. They are half a block tall and half a block wide. They can jump up to eight blocks high and prefer to sit on lily pads and dripleaves. Occasionally, you may hear them croak and inflate their throat. Unlike most other passive mobs, Frogs do not drop any resource when they are slain.

Where do Frogs spawn in Minecraft?

Frogs can only naturally spawn in swamps, meaning that you will only find them in the Swamp or Mangrove Swamp biomes. Frogs will typically spawn in groups of two to five at one time. However, they can also spawn by growing from tadpoles. Tadpoles do not spawn naturally. Instead, they hatch from frogspawn, which is created when two frogs mate.

Related: How to find Mangrove Swamps in Minecraft

How do you breed Frogs?

You can breed two frogs by feeding each of them a slime ball. They will breed in a similar fashion to how turtles do, in the fact that one of the Frogs will search for a good place to lay eggs. After some time, they will hatch in groups of two to six tadpoles. These Tadpoles can be picked up in a water bucket and taken to another location. They can only survive in water, so they will scurry to find some if they find themselves on land. They are also prey to the Axolotl and will panic if one is nearby. After some more time, these tadpoles will grow into one of the three frog variants, depending on the temperature of the region they grow up in.

What are the different Frog variants?

There are three Frog variants. The type of Frog is entirely dependent on the temperature of the region in which a tadpole grows into a Frog. There is the green Cold Frog, which is one that was raised in an ecosystem that has low temperatures, such as Snowy Mountains. Then, there is the orange Temperate Frog that grows up in temperate climates such as a Taiga. Finally, you have the gray Warm Frog that is raised in warm climates like those of Jungles or Mangrove Swamps.

Frogs do, in fact, attack some mobs. They do so by using their tongue to pull certain mobs into their mouth, causing the mob to instantly despawn. They attack small slimes, as well as small magma cubes. These small Magma Cubes, when slain, will leave a Froglight block. The type of froglight depends on which type of frog attacked the Magma Cube: temperate frogs will spawn yellow froglights, cold frogs spawn green froglights, and warm frogs spawn purple foglights.

That is everything there is to know about Frogs in Minecraft. They are quite the special little creatures with a supringly high leap and an adorable little croak. Now, if only those Froglights were easier to get...

For more Minecraft guides, check out How to find the Deep Dark biome in Minecraft right here on Pro Game Guides.

Everything to know about Minecraft Frogs – Where they spawn, how to breed, & more!