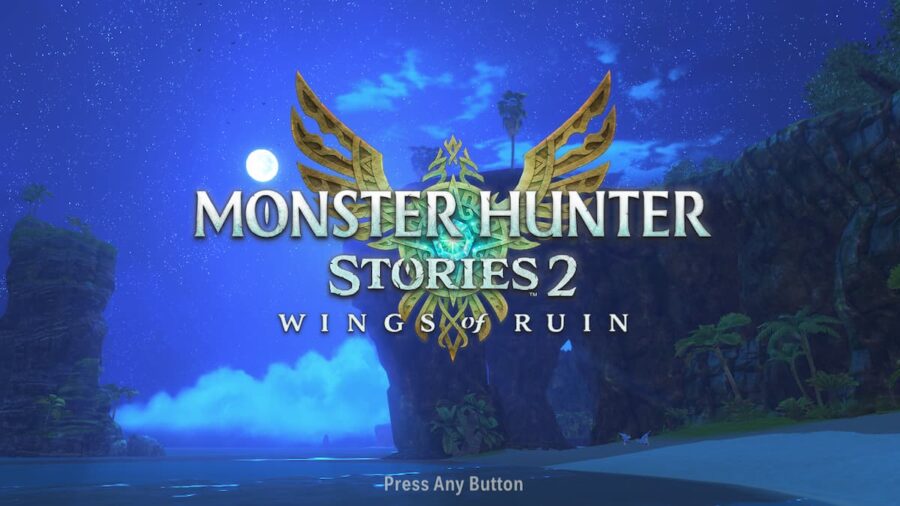 Plenty of developers have tried to change the style and mechanics of a gaming series. To turn it into something that's it not, for a change, or to see if it's possible. This differs massively depending on how grandiose the change of genre is.

Right off the bat, you can tell immediately how charming and cute Monster Hunter Stories 2: Wings of Ruin will be. Even more so upon realizing the game's departure from the traditional series: of killing these monsters and carving them to gain materials, to instead forming bonds. And with their help, taking down menacing creatures that may be a threat to villages everywhere. Monsters you may have hated in the series, you may swiftly change your mind after joining your team.

Upon playing, you'll see plenty of variation between old and new. This may be in the form of monsters from all releases of the franchise or the appearance of Scoutflies which first appeared in Monster Hunter World. Barely anything has been left out. It will constantly surprise you how much Capcom kept the heart and soul of the Monster Hunter franchise.

If this is your first time playing a Monster Hunter RPG, there's a lot to learn, yet the battle system is refreshing and engaging. It upholds one of the main premises of the series: to watch and pay attention. Knowing is half of the battle.

This is not a solo game. You are always joined with a monster companion, known as a Monstie. Very much like the Pokémon series, you can hold up to six monsties and change them in battle. Monsties choose attacks automatically, but you can alter what they do.

The turn-based system is based on a rock-paper-scissors formula. Meaning everything is strong to something but is equally as weak to something. These are known as Attack Types: Power>Technical>Speed>Power.

Don't worry. There's still everything else familiar from the series: weapon type damage (slash, pierce, and blunt), elemental weakness, targeting monsters' breakable parts to stop them using certain moves. If it's a mechanic in a main Monster Hunter game, it's safe to say it's be included in MHS2. Though in this title, you can equip up to three weapons and change one per turn. If your slashing weapon is ineffective, change to a piercing or blunt weapon.

Yet, all these are entirely based on choosing the correct attack type at the right time. In battle, if a monster is targeting you and vice versa, you will engage in a head-to-head fight—the winner causes more damage but still takes a slight bit of chip damage. You can walk away from a head-to-head unscathed if your monstie also uses the same attack type as you. This will cause a double attack to ensue and cancel out the enemy's attack completely, saving you in dire straights.

There's a lot of slight nuances to this system. Monsters can also get enraged and have odd quirks—thus changing what attack type they use—making the fight turn into a guessing game of the next best move, which is oddly fun. Paying attention is paramount; if you don't, you'll be taking heavy damage in the late-game.

Upon winning head-to-heads and double attacks, you will gain Kinship, leading to a unique ultimate attack that differs with each monster when filled. These attacks are amazing to watch. And when a teammate accompanies you, you can duo an ultimate attack!

Upon winning a fight, you are given a rank and monster materials. You can increase your rank by doing numerous things in battle, and the higher the rank, the more materials you obtain. The difficulty is hard, but having no game over is incredibly lenient. The quality of life additions—increasing the battle speed and the instant finishing against weaker enemies, are brilliant.

To gain new monsties for your team, you need to enter monster dens and procure the eggs from their nest. This is random, but the eggs are very different, so you can tell when something is new. On occasion, you have a chance to find a rare or rainbow egg that has more rare monster genes. These genes are what skills the monster can use, as well as passive effects. For those wanting to make the perfect monster, then the gene system is for you, but you can more or less ignore this system if you so choose.

Sometimes after you defeat the monster, they will retreat to their den. This means that you can guarantee to get that monster in an egg. Though this can happen by chance, you can increase the odds by causing specific things to occur in battle, but these are oddly specific.

The areas to explore are vast and open, with plenty of resources, chests, and creatures to fight. Though, the appearance of a golden monster den will test even the mightiest of gamers' willpower. Monsters have riding actions that you can use on the field to get to new sections. To name a few: jump, swim, and icy climb, and plenty more. Having a diverse set of monsters in your team for riding actions is handy. But it's all completely optional, and you can come back to each area and get everything later on.

There's a plethora of content in MHS2. From side quests, collecting every weapon and the armor, bonding with the 100+ hatchable monsters, to facing off against the ultra-hard Royal Monsters that appear in various areas. If you want to focus on the main story, you can easily complete it in under 50 hours. The difficulty isn't hard but is nothing to scoff at. To 100 percent the game, however, is a different kettle of fish. It will take three times as long, and then some.

With the new addition of co-op play, you can travel with a friend and complete quests together. Face other riders in Online PvP, where it'll truly be the ultimate game of rock-paper-scissors, and earn experience for your party as you do. There's a ton of content coming after a launch, with title updates involving new quests, monsters, and more.

Even after the main story is complete, you have the run of the world. Take on harder quests, monsters, or craft the best you can make—the choice is yours.

The game isn't perfect. It's not good at displaying information. During battles, there is too much information that, surprisingly, is missing from display like Attack Types, Elemental Weakness, and Status Weakness. The only thing the game retains is Physiology Weapon Weakness, aka which body part is weak to slash, blunt, along with piercing damage. This means you have to remember every monster's attack type, and each one has two attack types and sometimes a third. Without writing everything down or using a guide, you'll eventually lose track and forget everything. Sure, the in-game Monstipedia and Monsterpedia contain all this information, but not where you need it: during a battle. This is information overload at its finest.

Towards the end of the game it starts to forget some of its own mechanics. Sometimes, breaking monster parts doesn't seem to stop enemies from using them for attacks like in the early game. This wouldn't be a problem, but the difficulty often spikes between areas and at times you can get one-shotted, even more so when the monsters start taking more attacks in the same turn.

Even with its few issues, MHS2 is a joy to play. You are still playing Monster Hunter, just in RPG form. The entire essence is still there; it's just mechanically different. Quest boards, combining, weapon and armor upgrading/crafting, collecting materials, hot and cold mechanics, armor skills, and talismans—it's all there.

Many developers are experimenting outside the confines of their respective genres, and it has worked splendidly for MHS2. The battle system is unique and a delight. The game continues to open up and expands into the great world it offers. Everything clicks. Everything falls into place. The transition from action to RPG is the perfect unison of these two genres.

One last thing. Don't think that Capcom has forgotten about anything just because it's an RPG. You'll be pleasantly surprised, especially when the end-game comes around!