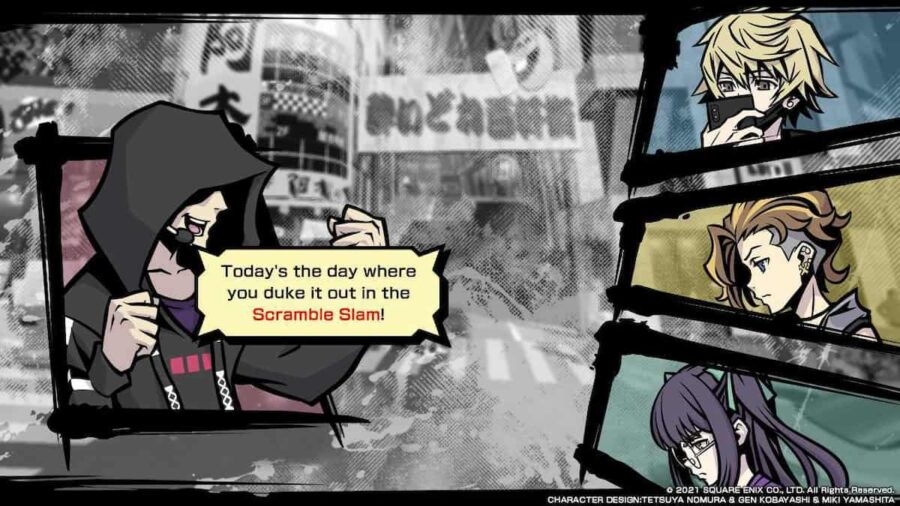 Scramble Slam is a game in NEO: The World Ends With You that you play during Weeks One and Two, in which your goal is to have the Wicked Twisters dominate all the available areas on the Shibuya map.

Winning Scramble Slam is easy—what’s not, however, is racking up points to get all the rewards. Week Two Day Three will even have you clamoring for 400,000 points to get the No. 282 What a Shock! Pin.

How to earn points in Scramble Slam

Every noise that’s chained together with these two enemies will be counted towards your total score.

Related: How to grind money fast in NEO: The World Ends With You

How to earn a lot of points in Scramble Slam

Before you attempt to redo any of your Scramble Slam days, make sure you have the Cony×Cony Shopkeeper’s node unlocked, granting you access to Chain Extender. This will allow you to chain up to 10 red noises, maximizing the number of points you can earn.

2. Only absorb one orange noise in every chain

If there are three orange noises in a turf, don’t engage all of them in a single chain. Instead, absorb one orange noise at a time and chain five to eight red ones with it.

Battles against other players on the enemy turf automatically engage when you get too close. So, before you approach them, make sure that you’ve absorbed five to eight red noises as well.

That said, don’t defeat any of the enemies until you’ve reached at least a multiplier of four for the earned points to be worth it. Prior to that, damage them until they're down to 25% of their HP before moving targets.

They won’t always appear, but when you see an enemy with a BONUS multiplier above their head, make sure to defeat them last or when your multiplier is at five. This is to maximize the points you earn from defeating them.

If you’ve cleared all the red noises in an area before you've finished off the orange ones and enemy players, don’t worry. Just re-enter it and they’ll spawn again! This will let you chain long battles indefinitely.

For more help with Neo: The World Ends With You, be sure to check back at Pro Game Guides.

Recently Updated Neo: The World Ends With You Posts

Where to find every missable Axion, Dilaton, and Dibaryon Pin in NEO: The World Ends With You

How to beat the Another Day super boss in NEO: The World Ends With You

How to grind money fast in NEO: The World Ends With You

NEO: The World Ends With You complete Food list