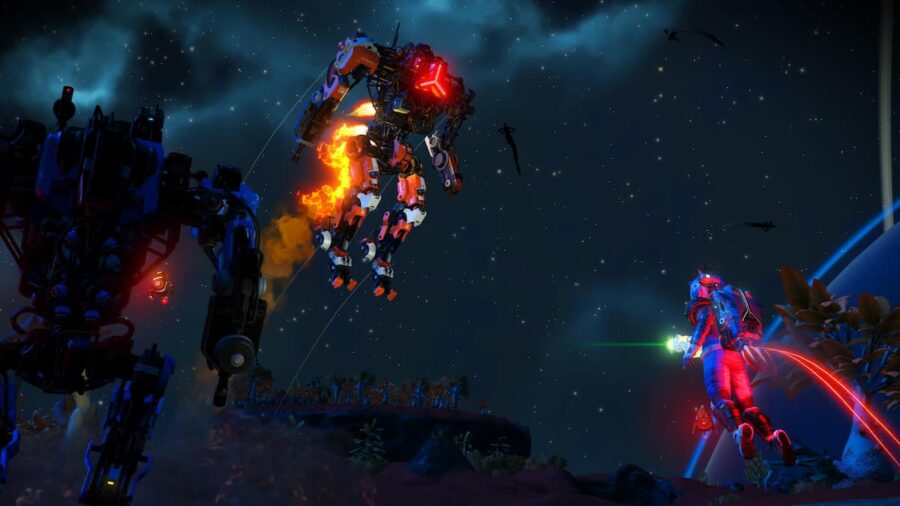 The recent Sentinels Update in No Man's Sky introduced a number of new additions to the game. This includes new Multi-Tools, Starships, Drones and enemy Sentinels. One of the most exciting additions to the Sentinel fleet is the new Hardframe Exomech. This unit is deployed with other Sentinel forces, and comes equipped with a variety of weapons. Players can defeat them and steal the advanced technology blueprints to upgrade their own Minotaur Exomech into a re-programmed Sentinel Hardframe.

In order to get the Hardframe upgrades, players need to start the Trace of Metal mission. This mission starts after the player has accepted the Overseer position in a Settlement. The first part of the mission includes defending your Settlement from attacking Sentinel forces. The defeated Sentinels will drop blueprints and items required to build your own Sentinel Drone. Interact with your Drone, and it will give you co-ordinates to a nearby Sentinel Pillar. Follow the co-ordinates to find the Sentinel Pillar, guarded by a Sentinel fleet, with three Nodes surrounding it. Destroy all the Sentinels, then proceed to destroy the three Nodes.

Once this is complete, you will be allowed to Interact with the Pillar Access Node. Doing so will grant you a Sentinel Hardframe Right Arm blueprint. Then, speak with your Drone again, to receive instructions to install the Hardframe upgrade on your Minotaur Exomech. Simply call in your Minotaur using the Geobay, or the Summoning Station in your freighter, and proceed to install the Arm upgrade.

Related: How to recruit your own Minotaur Exomech in No Man’s Sky – Sentinel Update

We shall again need to interact with the Drone, to receive news that there is trouble at your Settlement. Once arrived, interact with the Settlement Administration Terminal inside the Overseer's Office, and an NPC will show up. Respond to the situation as you see fit, and then interact with your Drone again. The Drone will send us to a location, in another system, where we will see a Planetary Manufacturing Facility. Defeat all the Sentinels, blast through the door, and activate the module inside the building. This should give you the Sentinel Hardframe Left Arm blueprint. As usual, call in your Drone, and it will tell you to install the part. Once done, warp back to your Settlement.

We will now need to head to the Anomaly and give the Walker Brain to Tethys. In return, they will give us the Sentinel Hardframe Body blueprint. To install it, we will require a Radiant Brain. In order to get this, we need to head to space and jump into pulse drive. Once the mission tells you to stop, pull out of pulse drive to see the Messenger of Atlas. Present the Pristine Brain, and it will get converted into a Radiant Brain. Now, all that's left to be done is to install the final component in the Exomech, to turn it into a Hardframe Battlemech.

Looking for more survival games like No Man's Sky? Check out the Best Survival Games of 2021, here on Pro Game Guides.