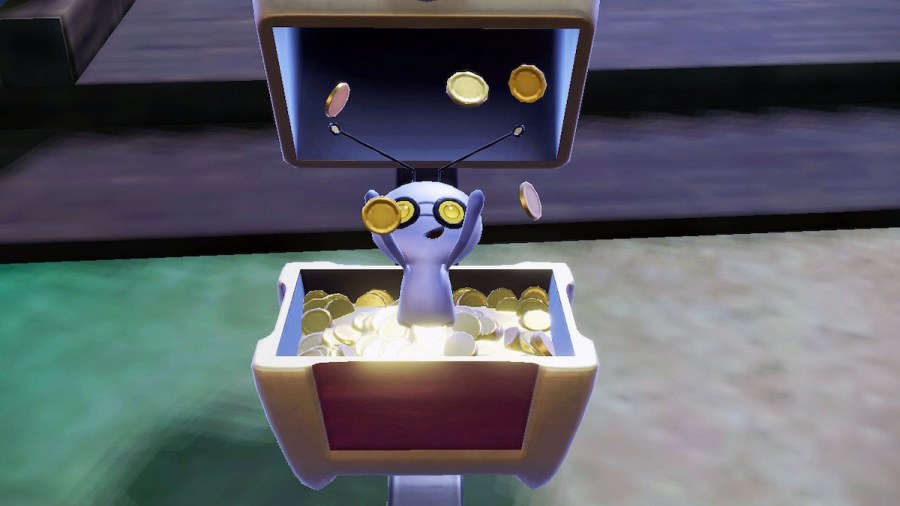 In Pokémon Scarlet and Violet, Gimmighoul can be found early in the game's story. However, to evolve the new ghost chest Pokémon into Gholdengo, you will need to first embark on a lengthy side quest to collect hundreds of coins.

Where to find Gimmighoul in Pokémon Scarlet & Violet

Gimmighoul is rather easy to find, as the new Gen 9 Pokémon actually appears close to the Paldea Academy at the very start of the story. After completing the introduction tutorial, take the Mesagoza West exit from the school and travel on the path heading towards Cortondo Gym. Gimmighoul Chest Form spawns in the South Province (Area Two) Watchtower. To access it, simply climb up the ladder until you reach the very top. Walk around in a circle until you see a chest that is resting up against a wall. If you walk up and press the A button, a battle with a level 10 Gimmighoul Chest form will be triggered. After catching the Paldea Pokémon, it will automatically give you 50 Gimmighoul Coins. Gimmighoul Chests can also be found throughout the map, however, South Province is the quickest way to catch it. Now that you've added Gimmighoul Chest Form to your team, you will need to take on a lengthy quest to unlock its evolution into Gholdengo.

Unlike other Pokémon in Pokémon Scarlet and Violet, Gimmighoul does not evolve based on level, or through evolution items. Instead, the Ghost-type's second form is completely tied to a lengthy side quest that will take you most of the game to achieve. Gimmighoul Chest Form evolves into Gholdengo after you have collected 999 Gimmighoul Coins. Once you have obtained the exact amount of money needed, you now need to level up Gimmighoul Chest Form once to automatically trigger its Gholdengo evolution.

How to collect 999 Gimmighoul coins in Pokémon Scarlet & Violet

Similar to the Spiritomb Wisp mission in Pokémon Legends: Arceus, Gimmghoul's 999 gold quest line is meant to take hours to complete. Because of this, you will need to explore the entire Paldea region in order to find enough coins to fill up the Ghost-type chest. While daunting at first, Scarlet and Violet offers up several ways for you to get your hands on the coveted Gimmighoul Coins, which are detailed below.

In Pokémon Scarlet and Violet, the map is divided up into four quadrants known as North Province, East Province, South Province, and West Province. In each section, you will be able to find Watchtowers that will contain one Gimmighoul Chest at the very top of them. It doesn't matter if you catch the Ghost Pokémon or knock it out, ending the encounter will net you 50 Gimmighoul Coins. This is the quickest way to reach 999 coins, and you can explore the entire map in a circle to find each tower.

There are also hidden Roaming Gimmighoul throughout the Pokémon Scarlet and Violet map, which will give you a coin if you press the A button and click on them. You can't catch the Roaming Form version of the Pokémon as they will instantly run away. However, they are worth clicking anytime you see them as they can give you anywhere from 1 coin up to 20; it's completely random. The Roaming Gimmighoul spawn in every nook and cranny of the map so make sure to look around in any location you are visiting. The Ghost-type also creates an audible noise whenever you are nearby. The most common place they appear are on top of and behind Route and City Signs, as well as broken ruin walls. While they don't give as much as the Chest Form, the coins do add up over time as you play the story.

Pokémon Scarlet & Violet: How to find Gimmighoul Chest Form and evolve it into Gholdengo