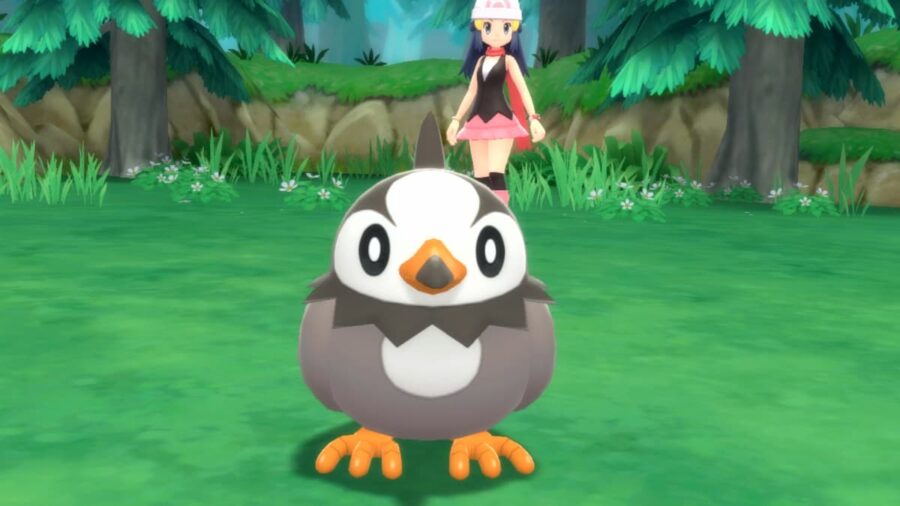 Though your starter can carry you through most of the gyms in Sinnoh, they still have their weaknesses and HP limits. This is especially true in the beginning where the level of your Pokémon and the gym leaders’ have a non-existent gap. It’s much easier for your starter to wipe all members of the Elite Four, for example, simply because it’s 20 levels higher than their Pokémon. But if you’re up against Roark with a Chimchar alone, you can bet the battle is going to be difficult.

Compared to most Pokémon games, however, Brilliant Diamond and Shining Pearl have a surprisingly good selection of early-game Pokémon. Most of them can even accompany you all the way to the Hall of Fame.

If you have an existing Pokémon: Let’s Go save data on your Nintendo Switch, you get a free Mew in Floaroma Town. Simply talk to the old woman in the area. Mew is the only Pokémon with perfectly balanced (and high) stats, so you can train it into however you want it to be, from a tank to a Sp. Attacker. It learns nearly every TM move.

The moment you step into Jubilife City, you can receive an Old Rod from a Fisherman at the west exit. You can use it to catch Magikarp in any body of water. Magikarp itself is pretty useless, but Gyarados, its evolution, is far from that. Magikarp evolves into Gyarados at level 20. Gyarados is extremely fast with a high Attack stat, so it’ll beat the opposing Pokémon before can they get a turn.

You can catch Shinx as early as Route 204. It’s an electric type with remarkable Sp. Attack and Attack power (depending on how you want to grow it). It learns Thundershock at level four, Bite at level 12, and Spark at level 16. If you’ve chosen Piplup as your starter, Shinx and later on Luxio (at level 15), will cover of most your vulnerabilities.

If you have Chimchar and are looking for a decent grass type to attack Roark’s gym with, Budew is your best option. As a Budew, it’s Sp. Attack stat is already pretty good but it’s evolutionary line is better. It evolves into Roselia and, later on, Roserade with a Shiny Stone.

Related: Where to find all gift Pokémon in Brilliant Diamond and Shining Pearl

Budew’s line may not have the best HP, but it learns so many useful moves such as Grass Knot and Weather Ball. As long as you can hit before your opponent, you’re pretty much set for victory.

Starly’s line are the best flying types in the game—and you can catch this bird in the first patch of tall grass you see. Much like Gyarados, it has a (very) high base Attack and a sweet base speed. As a Starly and Staravia, you already have access to Wing Attack at level nine and Aerial Ace at level 25.

Staraptor, its final evolution, also learns Close Combat and Brave Bird, which are some of the best physical attack moves in Pokémon. Many Sinnoh trainers take Staraptor to the Hall of Fame because of this.