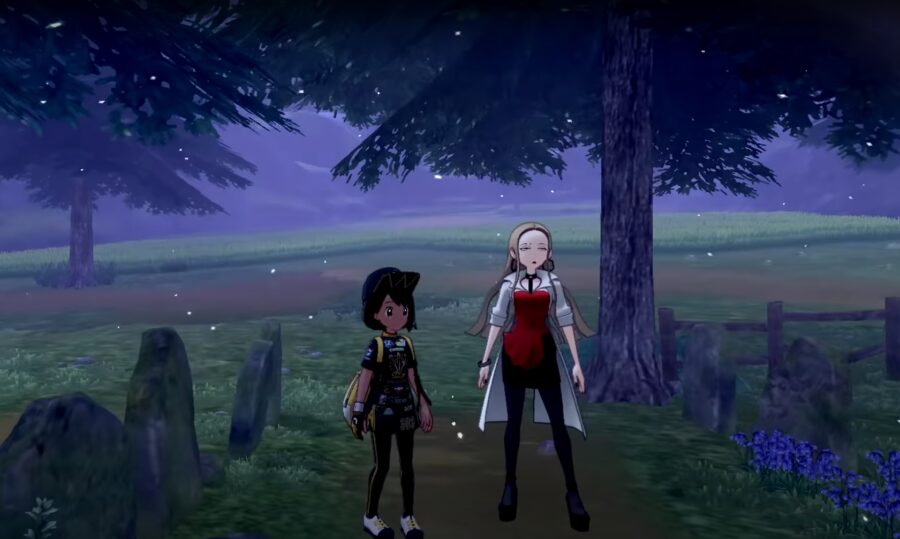 Many Easter eggs are often hidden in video games, and Pokémon Sword and Shield are no different; even the latest expansion, the Crown Tundra, has some. Everyone who has played the base game of Pokémon Sword and Shield no doubt can remember Oleana, Chairman Rose's secretary and the vice-president of Macro Cosmos. Well, she might have been all high and mighty in the base game, but now she's nothing like her former self; it seems she's chasing after ghosts and searching high and low for any information on where Rose might be.

Oleana can be found at the Old Cemetery in the Crown Tundra at nighttime, but only after the story content has been completed. Without doing the story, Oleana will not appear in any shape or form.

At the end game, Oleana asks you to stop Rose's plan to bring about the second Darkest Day by using Eternatus. During the post-game, she can be found volunteering in the Galar Mine to somewhat repent for what she and her boss attempted to do.

However, after the Crown Tundra storyline has been completed, you can receive a hint from Peonia near the Dynamax Adventure door, yet this only happens after you keep speaking to her for a while. Eventually, she'll say:

Hey, have you heard the rumors about this long-haired woman? Apparently, night after night, she visits a grave in the tundra, always looking for something...

This hint is talking about the Old Cemetery, and you might remember this location if you chose to plant the Carrot Seeds there to get Spectrier. Head on over to the Old Cemetery when it's nighttime, and you should see Oleana standing there to investigate rumors of a potential Rose sighting. Upon speaking to her, Peony will appear, and Oleana will confuse him for Rose. This information will quickly anger her, then just as quickly, she calms down and leaves.

If you then check Peony's League Card, it will tell you that Peony is Rose's younger brother! No wonder Oleana was upset!