Our Pokemon Sword and Shield How-to Check IVs guide walks you through what you'll need to do to obtain this useful new ability in either game! This is a late game feature, so you can't really attempt this early on. You might not want to read ahead if you're worried about spoilers at all, but there shouldn't really be anything listed in this post that isn't already widely known. IVs are useful to know when you are breeding Pokemon and taking steps towards the competitive game.

IVs stands for Individual Values. They are one of the major determining factors of how a Pokemon's stats are distributed. Each of the six battle stats has an IV associated with it, and the amount of that IV determines how high or low that stat will be. The IV is traditionally set randomly between 0 and 31, with 31 being the best and 0 the worst. It is extremely rare to find a Pokemon in the wild that has a full set of max IVs, which leads most players to breed their Pokemon over and over to try and obtain the desired numbers.

You will need to complete the story of the game to obtain this ability. Once you do you will need to head to Wyndon which is at the very top of your map! Fly on over there and enter into the Battle Tower which you end up right next to after you fast travel. Talk to the lady right next to the elevator doors on the left. This starts you off battling in the tower. This style of battle has you pick three different Pokemon that are fixed at level 50. The battles are pretty standard trainer battles, but they are a bit tougher because all the Pokemon are on an equal footing in terms of level. So, make sure to pick Pokemon that have a good spread of types and can deal with many different scenarios.

You'll need to continue to battle different trainers in the Battle Tower until you encounter and beat Leon (around five battles). After you do that, you will unlock the Judge function. This is what we need to view our Pokemon's IVs.

How-to Use the Judge Function 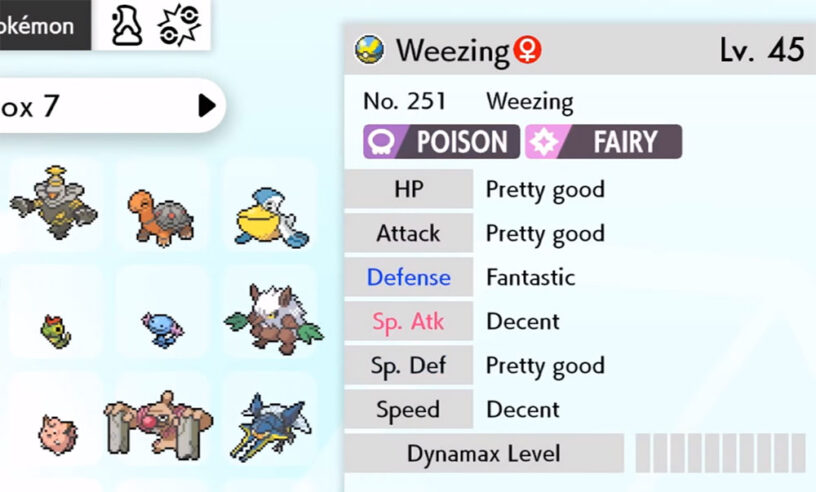 Go to your PC Box and seek out the Pokemon whose IVs you'd like to check. Hit the + button until you see a listing that displays descriptions of each of the stats. You should see words like: decent, pretty good, fantastic, and best. You will know if your Pokemon has a particular stat maxed out if it is listed as Best. The feature also judges your Pokemon's overall stats with a description below the stat listings.

Which should I get: Pokémon Brilliant Diamond or Shining Pearl?

Is Tsareena coming to Pokémon Unite?