We're taking a look at how to obtain the new Nature Mints in Pokemon: Sword and Shield! Game Freak has made it so you won't have to worry too much about the Nature of your Pokemon because you can do a bit of grinding to change it to whichever you want.

Nature Mints can only currently be acquired late in the game. These do not drop anywhere as a reward, and can't be found by just playing the story. These appear to be a late game type of item only, so you will likely need to complete the story before you can grab these.

The only currently known way to get them is to head to Wyndon and go to the Battle Tower.

Once there you can talk to lady behind the Battle Points counter on the very left. She sells all of the mints and they can be purchased with Battle Points. 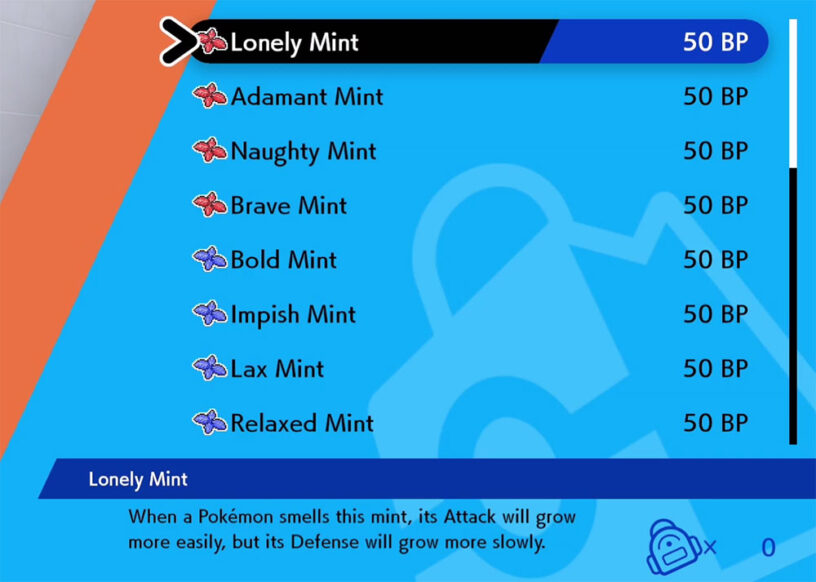 As you can see, each of the Mints can be purchase for 50 BP. You will need to battle in the tower to earn points.

Battling in the Tower

You can compile your own team of three Pokemon or you can even borrow some from a nearby person in the tower lobby. Jump into the battle and take down the trainer who stands in your way. Once you complete the battle you will receive 3 BP each time, and if you rank up you will receive a Rare Candy as a reward.

Here's a list of each of the Natures that has a Mint associated with it and which stats it boosts and the ones it decreases. Every nature except for Serious will increase one stat and decrease another. You'll want to pick the one that boosts your particular Pokemons most important stat!