With this guide we'll be taking a look at all the information about shiny Pokemon in Sword and Shield! Things are looking interesting if you're on the hunt for shinies in the newest generation of Pokemon. We're seeking to make sure you have all the details you need to catch these uniquely colored creatures effectively!

Here's a look at some key things to know about shiny Pokemon in Sword and Shield!

That's really all you need to do to hunt shiny Pokemon in these versions of the game. This can take a really long time, but you can help increase those odds by doing the following.

Battle the Same Pokemon to Increase Your Odds at a Shiny!

It was originally found in the datamines that you could battle and chain Pokemon. However, based on a post on the official Pokemon site, it looks like you just need to battle the Pokemon over and over to increase your odds. Chaining does not appear to exist in this game, so you don't have to worry about breaking a chain by battling another Pokemon. Here are the odds that have been calculated based on the amount of times you've battled the same Pokemon and if you have the Shiny Charm or not:

You can check how many times you've battled a particular Pokemon. Go to the Pokedex listing of the Pokemon you've been battling a lot, and you'll find a listing called Number Battled with the amount of times you've encountered that particular one.

The Shiny Charm does exist in Pokemon Sword and Shield. To obtain it you will need to complete your Pokedex in the game. This can take a long time, but it does increase your odds enough to make it worth it.

You can find a bunch of general details about Shiny Pokemon in this section of the guide!

In a lot of the previous games you could soft-reset the game over and over until you got a shiny version of the starter you wanted. This was a tedious process, but a lot of players felt it was worth it so they could get a unique looking early looking Pokemon to take on an adventure. In Pokemon Sword and Shield you CANNOT do this! The way to get shiny starters is by breeding them at the Pokemon Day Care. You can find a Nursery on Route 5. To grind out the eggs you need to take a certain amount of steps to hatch them, so thankfully there's a long path you can bike up and down next to the Route 5 Day Care!

You can't soft reset for shiny Legendaries in this game unfortunately. While the sprites seemingly exists for these, it is currently unknown how you will be able to receive them. If you've seen videos for these, it's likely the person hacked them into the game.

You Know a Shiny By This Icon! 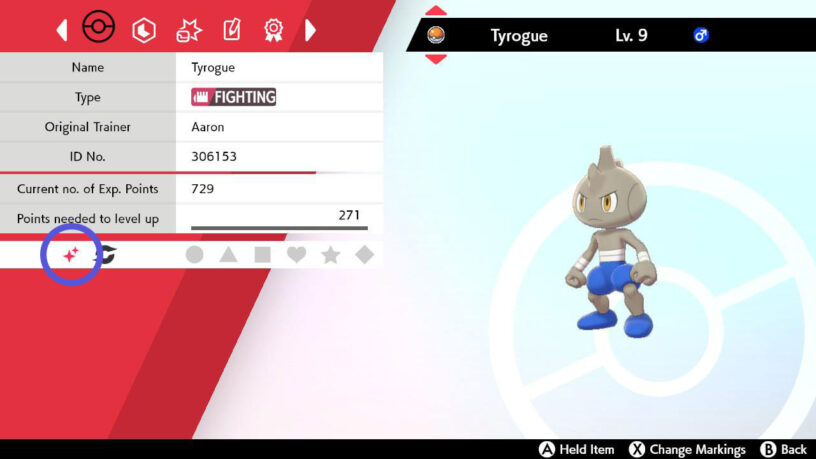 If you aren't sure if you've gotten a shiny, open up the Pokemon's details and look below the "Points needed to level up" listing. You should see a couple of red sparkles that will let you know that the Pokemon is shiny!

There was quite a bit of worry because high-level Pokemon that appear in the Wild Area cannot be caught. The concern was that if one was shiny, you'd be out of luck if you weren't high enough level to catch it. If you were one of these people then fear not! High-level Pokemon that can't be caught will not appear as shiny according to datamined information.

Shiny Pokemon Are Not Shiny in the Overworld

You cannot distinguish a shiny Pokemon if it is running around in the world. It will only be revealed as shiny when you encounter it.

As you can see, the Pokemon appears normally while in the grass and only when it is brought into battle does it show that it's shiny.

Shiny Pokemon will appear to be shiny in their enlarged form! Here's how a Mudsdale looks when they are humongous: 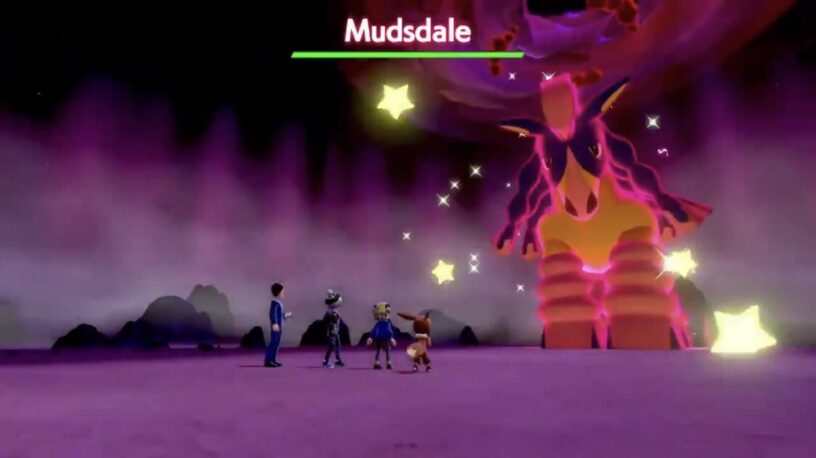 Here's a look at some of the new Pokemon that have been found in their shiny form! Credit to this post for rounding up a lot of this information.

Pokemon GO Confetti – What is it?