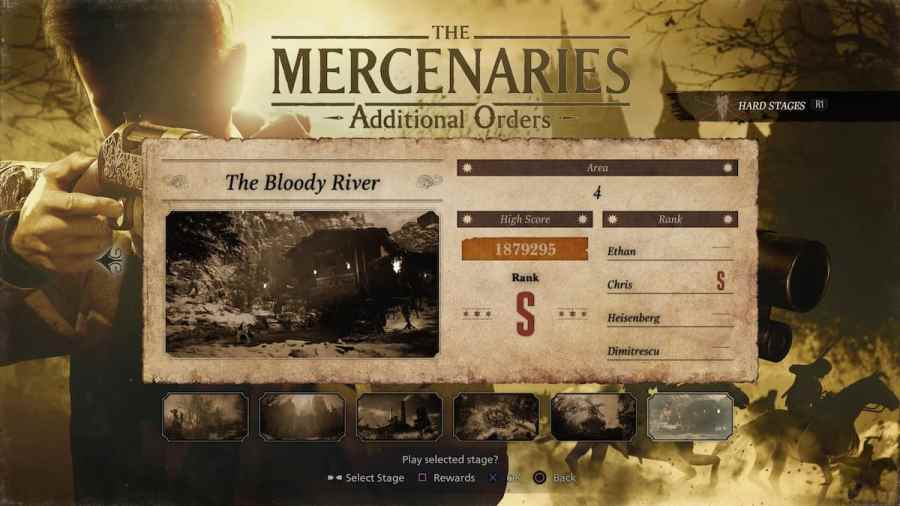 Karl Heisenberg and Alcina Dimitrescu are playable in the Mercenaries mode of Resident Evil Village's Winters DLC, but must be unlocked first. Chris Redfield is playable by default with the DLC and playing as him is one of the easier ways of getting through the levels. To unlock the additional characters, players will have to get through both The Bloody Village and The Bloody River with a high enough Rank. This is how to unlock Heisenberg and Lady D in Resident Evil Village.

To unlock Lady D, players have to get an S Rank in The Bloody River level. This fan favorite Resident Evil character has some requisites because The Bloody River doesn't unlock unless players finish The Bloody Village first. This level is unlocked along with the third-person mode with the Winters DLC.

Playing as Chris Redfield is one of the easier ways of getting through the level with a high Rank, but it is entirely possible to do so with Ethan as well. Ethan has a lot of build variety while Chris can excel in punching because of how his Onslaught Meter works. Knocking over creatures with a straight punch will let Chris be able to Stomp on them for a lot of damage. Players should not sell their guns, as one of the levels will have players shooting at creatures on rooftops. Apart from that single level, punching can be used the entire time and is very effective at getting an S Rank.

Related: How to solve the Rose Statue Puzzle in Resident Evil Shadows of Rose

To unlock Karl Heisenberg, players have to achieve A Rank for all normal stages. There are six stages in total, and if players have already unlocked Dimitrescu, she can help in getting an A in each stage. The best way to raise the score for players is to get through each stage as fast as possible rather than relying on taking out as many creatures as possible.

Ethan's Knife Build, focusing on using the knife while stacking bonuses for close ranged damage, knife damage, and increasing knife damage while decreasing all other forms of damage, can make for very fast rounds and quick kills. Any character will do as long as players can get through each level with an A Rank and every level can be completed with different characters to still count.

For more Resident Evil Village guides, check out How to solve the Rose Statue Puzzle in Resident Evil Shadows of Rose on Pro Game Guides.