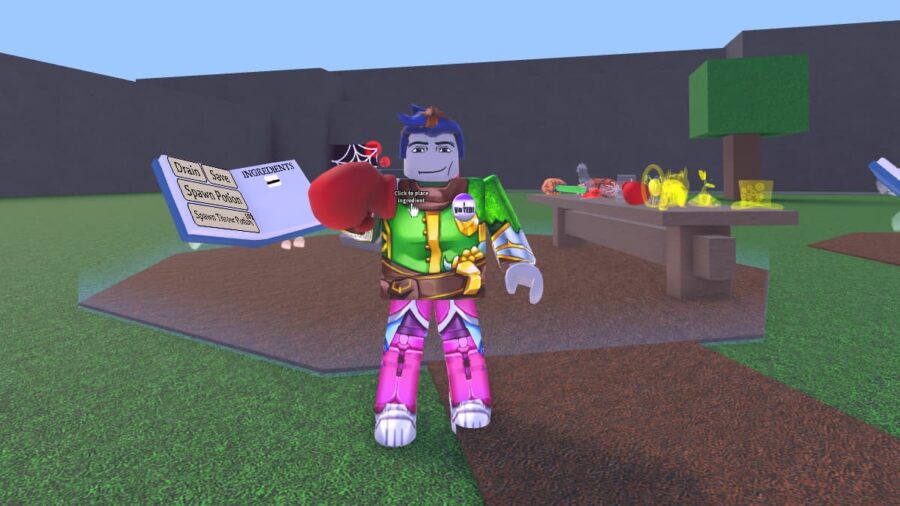 These are the recipes and ingredients you will need in order to get the Boxing Gloves ingredient:

First, place a Chilli ingredient into the cauldron to create a Hot Potion. Pick up the Hot Potion by clicking on it. Then, run to the secret passage, which is located on the mountain nearest the grey ramp (see images below).

Ignore the warning sign and click on the wall to use the Hot potion. This will burn away the barrier and allow you to run into the secret cave. Descend the stairs and clear the quick obby to proceed to the next step.

Pick up the Giant Key

The next obstacle you will face is the locked door, which can only be opened with the giant key. But, you cannot pick up the key in your current form because, well, it's too heavy! So, you will need to brew a Giant Potion. Press Teleport to Cauldron to return to your station.

Drain your cauldron before placing in the Giant's Ear, or else you won't brew the correct potion. Once drained, place a Giant's Ear ingredient, spawn the Giant Potion, and pick up the potion. Don't drink it until you've reached the giant key, because you will be too big to clear the small obby in the secret passage. With potion in hand, return to the secret passage.

Related: How to get the chili pepper ingredient in Roblox Wacky Wizards

If you have performed the steps above correctly, you will fall into the cauldron and die, thus creating a You potion. Carry the You Potion back to the Collector and hand it to him. Then he will create bridge for you to cross.

Once you can cross the bridge, interact with the guardian. He will force you to choose a side: Witch or Wizards? Choose either of the two sides and the guardian will reward you with the Boxing Gloves ingredient.

How to make the Poison Gloves potion in Roblox Wacky Wizards

How to Set Up an Elevator in Roblox Welcome to Bloxburg

How to get the Bird ingredient in Roblox Wacky Wizards