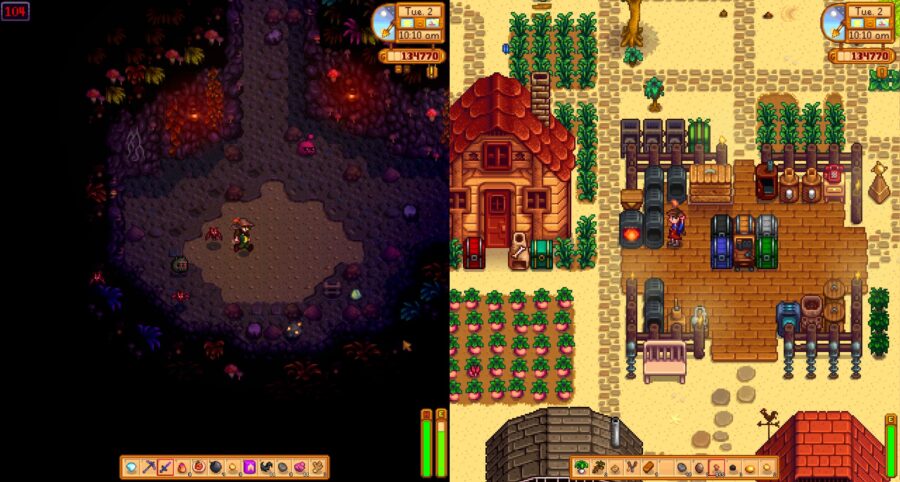 Stardew Valley is a spectacular game that just keeps on giving. Creator Eric Barone has put his heart and soul into the game, and right off the bat, you can tell. Barone is constantly thinking of his community as much as possible, and in his next massive update, 1.5, he's announced that split-screen co-op will be coming to the game! Though how does split-screen work? And is it coming to Switch, PS4, and PC?

In Stardew Valley 1.5, there will be splitscreen co-op! pic.twitter.com/n7XhPWSuSi

In his announcement on Twitter, Barone also uploaded a picture showing off how split-screen works. It looks like the screen narrows down horizontally, but with a game like Stardew Valley, that won't actually hinder both players that much. Of course, it's a reduced experience size-wise; however, you're having a friend help you, and that's worth it!

From the looks of it, players can still venture off and do their own thing. This isn't the olden days where players are limited to staying on the same screen as each other, now the world is your oyster, and you can both maintain the farm doing different things!

Along with the picture, there's a lot of easter eggs for new content that eagle-eyed fans have already spied. Within minutes a list of what people have seen was commented.

We are unsure when this update is being released; hopefully, we'll have more information before the end of the year. What consoles will receive the two-player co-op? From the Twitter thread comments, we think it's safe to say it's coming to everything apart from mobile - so Nintendo Switch, PlayStation 4, Xbox One. PC, on the other hand, is getting a four-player split-screen mode, which is fantastic!

Update 1.5 comes with a plethora of additional content, new trees, plants, customizable items, new enemies in caves! And that's only the things we know about. Obviously, Barone hasn't told us everything that is coming with the new update, as where's the surprise in that?

How to install Mods on Stardew Valley

What to do with Minerals in Stardew Valley | Minerals prices guide

How to hatch a slime egg in Stardew Valley

How to get all Stardew Valley Scarecrows and Rarecrows