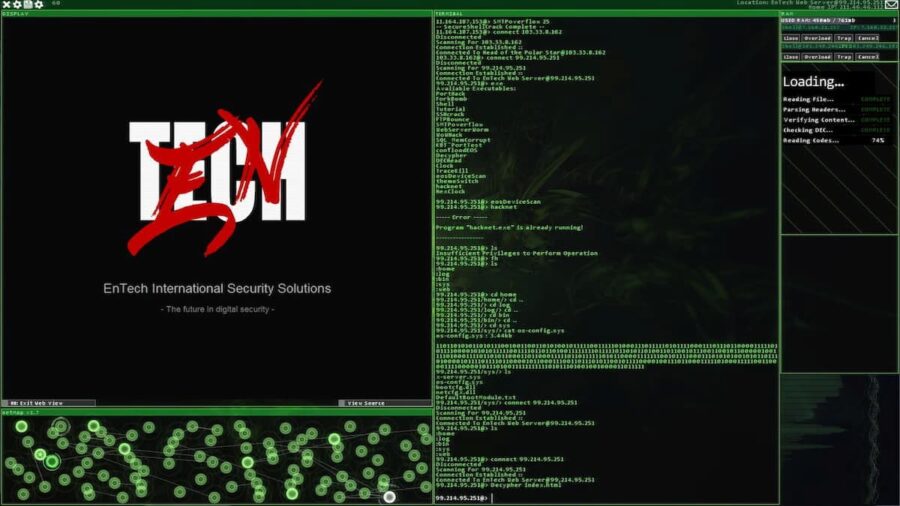 Whether you’re a certified hacker yourself or just can’t get enough of the genre, Hacking is a staple in games on the PC. And while some games get hacking all wrong, there are a few stand-out titles that genuinely get breaking into mainframes and cracking codes just right. Here’s a quick breakdown of some of the best hacking games on the market right now.

Hacknet is a critically acclaimed, stylish, and deep game that puts you in charge of solving a murder mystery using a retro computer setup. Hacking terminals, using clues to work out passwords, and defending your own server and computer from malicious attacks, Hacknet perfectly captures the feeling of a 90’s or early 2000’s hacker movie.

But beyond the base mystery, Hacknet fully supports community extensions, including mods and custom campaigns. These expand the game beyond the already impressive starting story adding even more content.

Related: How to hack in Terrain of Magical Expertise

Uplink is an older game that still holds up today. Set in the distant future of 2010(!), Uplink sees you take on the role of a professional hacker who takes contacts for companies around the world. You have to hack into rival computer systems, steal data, and undermine their security.

The most impressive thing about Uplink is how its missions, or contracts, work. None of the jobs have a set, locked-in-place method of completion. Instead, you have to use your hacking skills to work out the most efficient tools of the trade.

After the disappointment around Watch Dogs, Ubisoft’s open-world hack-em-up, the sequel managed to surpass all expectations to become a hit. Nailing the freedom of the open-world genre while creating an impressive story with a diverse cast of characters, Watch Dogs 2 balances the series entirely right.

Watch Dogs 2 is a lot more action-packed than the rest of the games on this list. This game will be right for you if you’re more of a fan of some of Ubisoft’s other franchises, such as Assassin’s Creed, instead of long-winded puzzles and social engineering.

Following in the footsteps of Duck Season, Five Nights at Freddy’s, and Doki Doki Literature Club!, Pony Island is a bait-and-switch game that turns from puzzle platformer to hacking game. In your attempts to rescue a mystery person from the computer, you must alter the programming of the Pony Island game within a game.

By altering the game’s code, you can bypass corruptions in the Pony Island game, and you can power up the game’s protagonist and cheat the system. From start to finish, the game forces you to hack and push it to the limit. Perfect for all hacking fans!

Master hacker? Newbie code breaker? Check out How to Hack/Infect Enemies and Switches in Axiom Verge 2 and How to Hack unprotected devices in Foreclosed.