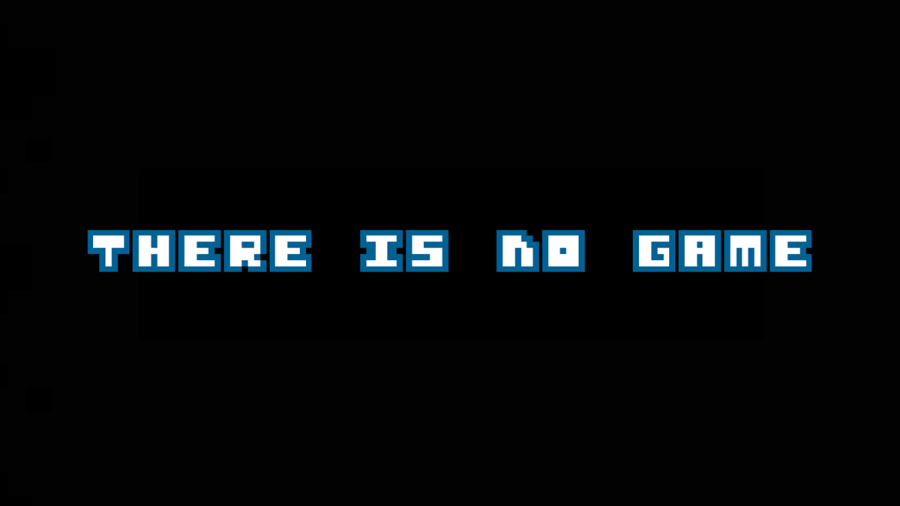 Most games are not self-aware. There is No Game, however, tears down the fourth wall and speaks to you as a player, similar to games like The Stanley Parable and The Magic Circle. Although the game starts out simple, the narrative unfolds over time, revealing a world with substance and intrigue. Here's a walkthrough for There is No Game.

What is 'There is No Game?'

There is No Game is a short title that was created for the 2015 Newgrounds Construct Jam. The game was developed around a single-word inspiration of 'deception.' This project ended up winning the 'deception' category, and spawning a sequel titled There is No Game: Wrong Dimension. This game was created by Pascal Cammisotto, referred to by his nickname KaMiZoTo, who would eventually launch his own game studio Draw Me A Pixel.

There is No Game walkthrough

Part One: Is there a game?

The game begins with an introduction by the narrator, leading to a blank screen with the words "there is no game." Press the "O" icon repeatedly to cause it to fall down. The narrator asks you to put the phrase back together, so drag the "O" upwards and drop it multiple times. An audio icon will fall on the ground. Your mission is to continue clicking this audio icon, muting the narrator.

The narrator attempts to protect the audio icon with a wooden panel, but simply click on the wood repeatedly to break it. To keep it safe, the narrator places a metal box in front of the icon. Drag this up and drop it down to disrupt the letters on screen. When the screws appear, hold down your mouse button to unscrew them. To begin Part Two, place the appropriate letters in the four boxes to spell "there is a game."

Part Two: There is a game

Part Two begins with an actual game, where you must break all of the blocks using the bouncing ball and a moving paddle. In the middle of this game, the narrator takes away the ball, but you can use the circular icon next to the score and pull it onto the field. Once you complete this game, you receive a trophy that can be dragged to other scenes.

The narrator mentions that you should be looking for a goat, although it is nowhere to be seen. Switch back to the "there is a game" scene and move around the letters to spell "there is a goat." This reveals a third scene, where a goat is trapped in a cage next to a waterfall. The key temporarily appears, but it is stolen by a flying squirrel. Once the goat is introduced, Part Three begins.

Part Three: There is a goat

Your primary goal is stealing the key from the flying squirrel. The narrator mentions that you must ascend to where the squirrel is, preferably by climbing a tree. Change the letters around to spell "there is a tree" and a small tree will grow. To expand this tree, you must take your trophy and fill it with water multiple times, dropping it on the small tree. Once the tree grows to the top of the screen, you can access a new scene.

The process for retrieving the key is quite obtuse and can be confusing for many players. You do not have to use the "there is a game" feature to solve the puzzle. Instead, you must tap the nut at the bottom-right area of the tree, and it will fall to the lower scene. If you try to offer the nut to the squirrel, he refuses, explaining that it must be cracked for him to eat it.

To crack the nut, take the metal box from earlier and drop it on top of the nut. Now, you can hand the nut to the squirrel, and he will take it. Finally, you have access to the key, and you can free the goat. After a significant piece of narrative, you can choose whether to forgive the narrator or not. This choice has no impact on the game, and you can choose whichever you wish.

For more game guides, come check out How to play Fortnite on a Chromebook here on Pro Game Guides.

‘There is No Game’ Walkthough and Guide