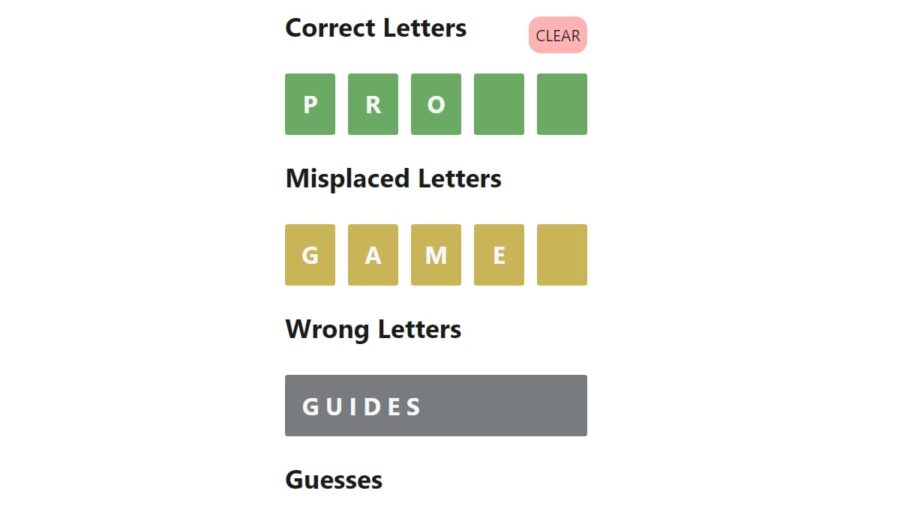 Ever been stumped on a Wordle and clueless about what it could be? You're on your final attempt with three seemingly random letters and your highest streak on the line; what do you do? Use our Wordle Solver tool and keep that streak intact!

Rather than looking up today's Wordle answer and spoiling it for yourself after having guessed a few letters, you're now scrolling through a myriad of potential words. This Wordle guesser tool lets you input the letters you have correct, misplaced, and wrong to show you a handful of filtered words your Wordle might be. The more letters you add, the narrower the search, making it much more manageable to solve your Wordle than ever before.

What is the Wordle Solver Tool?

The Wordle Solver is a helpful tool that you can use to cut out the middle man in trying to locate words. Instead of finding words with only confirmed letters, which could bring up hundreds of results, this Wordle word finder will also use the misplaced and wrong letters to narrow down the results astronomically—by removing/adding words containing them. Think of the Wordle Solver as using Wordle cheats. You're not getting the answer to the Wordle instantly but, instead, are siphoning off extra words that coudn't be correct.

How to use the Wordle Guesser tool

Using the Wordle Guesser tool is incredibly straightforward. Play Wordle like you normally would, and when you start getting correct (green) letters, misplaced (yellow) letters, and wrong (gray) letters, add them to our Wordle word finder. Type the Correct Letter(s) into the green row, Misplaced Letter/s into the yellow row, and any wrong letters into Wrong Letters. After inputting letters into the rows, you'll notice that all the words under Guesses will become filtered by your letters.

Misplaced Letters works a little differently. When letters get added to this section, it will tell the Wordle Solver tool that this letter is vital and won't filter out any words that include it. For example, if you have Z__L_ as your Correct Letters, you have three words it can be: zills, zeals, and zilla. But if you add the letter I anywhere in that row, zeals will disappear, leaving you with zills and zilla—a 50/50 choice!

Adding letters to the Wrong Letters row works the opposite way that Correct Letters works. It will remove words with letters in those positions—if Z is in the Wrong Letter section, the Wordle word finder will automatically remove every word starting with Z.

On Pro Game Guides, we also assist with other fun word games, like Quordle answers and Heardle answers.