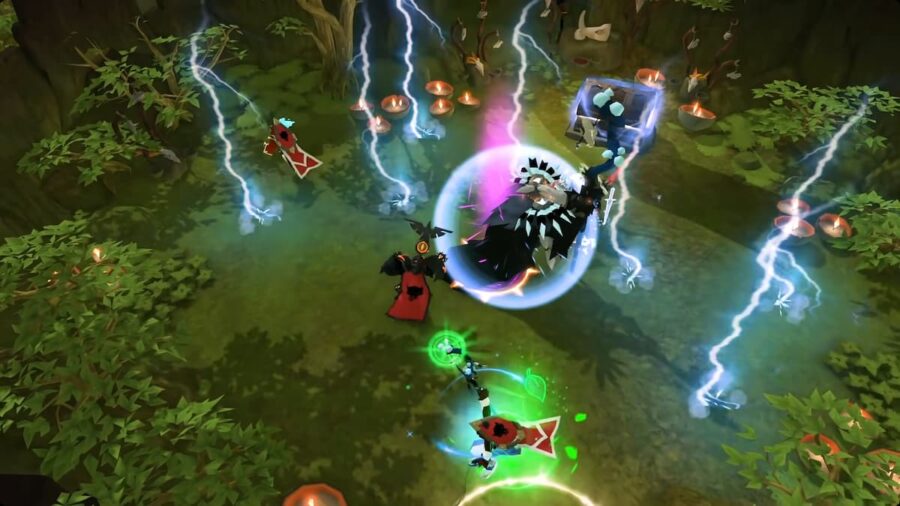 Albion Online is a medieval fantasy themed MMORPG where players seek to earn fame and grow stronger by crafting better weapons. The game's core mechanic revolves around a classless system, in which the equipment a player chooses to wield defines the abilities and spells at their disposal. This allows for players to change up their playstyle drastically with each weapon they use. Taking into consideration the various spells you can choose for each weapon, along with armor and consumables, the task of picking the right build becomes quite tricky. To help with this, we've rounded up five of the best builds you can use for both PVE and PVP in Albion Online.

If ranged attacks are your thing, then you cannot go wrong with the Bow of Badon. Being one of the strongest bows in the game, it deals a ton of damage in both PVP and PVE battles and even has decent crowd control. In order to get the most out of this build, make sure to constantly spam enemies with Deadly Shot to reduce their armor and always use Flash of Insight to get an immediate cooldown refresh on your boots spell.

Related: How to get a mount in Albion Online

This build is a solid choice for PVP and Corrupted Dungeons but can also be used for PVE fights. Where the Kingmaker lacks in movement, it more than makes up for with its massive damage. Couple that with the bonus defensive spells you get from your boots and helmet, and you have a greatsword build that can cleave through the toughest of opponents. The general rule of thumb with the Kingmaker is to get four sword stacks from Spell 1 and Spell 2, then decimate enemies with Majestic Smash.

The Spiked Gauntlets are a pair of gauntlets that provide a unique playstyle, with lots of damage, movement, and crowd control potential. They are one of the best weapon choices for solo players, and this build ensures high damage output with low cooldowns. If you're looking for a build that allows you to go toe-to-toe with your enemies to constantly keep the pressure up, then this is the one for you.

The Fire Staff is the perfect weapon for when you wish to incinerate your enemies from a safe distance. Not only can you constantly spam enemies with fire bolts, the fire damage taken by foes stacks to deal bonus damage. Pair that with the increased defense stats you get from the Guardian Boots, and you have yourself the perfect mage build.

If you're looking for a more versatile build for both PVP and PVE situations, this is the one for you. The Bloodletter offers a swift playstyle, allowing you to move quickly around enemies while simultaneously dealing damage. The best part about this build is that there is no specific order to use the abilities—instead, simply try to whittle down the enemy's health below 40%, then use Lunging Stab to finish them off.

Looking for some MMORPGs to play on-the-go? Check out our list of the Best Mobile MMORPGs, here on Pro Game Guides.