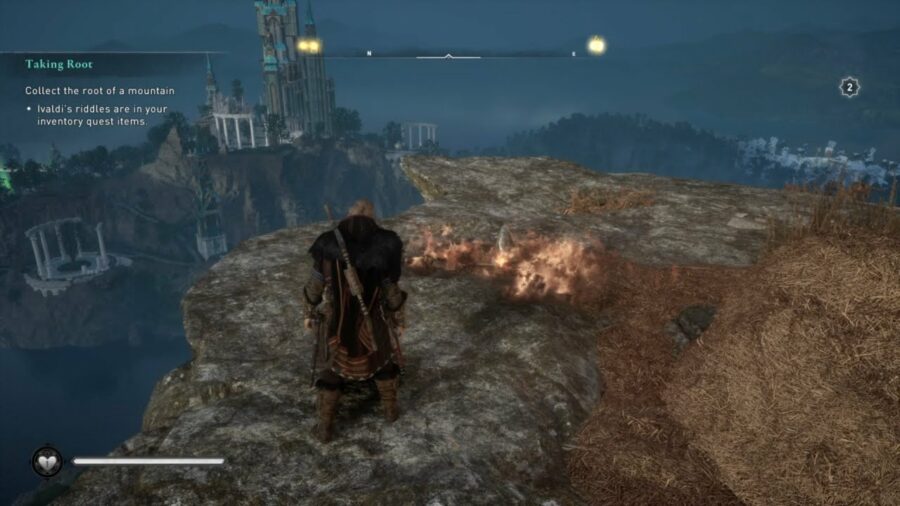 Assassin's Creed: Valhalla is one of those types of games where exploration and thinking outside of the box is key. The game doesn't hold your hand that often when it comes to completing quests and finding clues. You have to listen to conversations, read parchments, and clues to find out the information you are seeking! One such example is the riddles given to you by Ivaldi!

Taking Root is a quest in Assassin's Creed: Valhalla, where Ivaldi gives you a riddle called Potential at It's Peak. You need to solve this riddle to collect the root of a mountain, and though, since the quest takes place in Asgard, it becomes feasible to do so.

The quest starts with this riddle known as Potential at It's Peak:

Cradled in rock, At Asgard's highest height, A seed sleeps in Ymir's cold grip. Warm it awake, bring it to water, For old bone to sprout with new life.

The hints are pretty subtle in the riddle, but alas, they are there, though you truly need to think outside of the box to solve some of it. We'll go through it step by step.

At Asgard's height - this corresponds to the highest peak in Asgard, which luckily for us is a synchronization point. If you don't have the fast travel waypoint unlocked, the highest point can be located in the southwestern part of the southern landmass in Asgard. Head to the synchronization spot, then leap of faith into the hay below. Next, use your Odin Vision, and you'll see the seed near the haystack you just jumped in.

However, we must move onto the next line of the riddle - Warm it awake. This is where you have to think outside of the box; as for players who have never used a Torch before, you probably never knew you could equip a Torch at any time by holding down on the D-pad and then selecting the Torch at the very top of this action wheel. Equip the Torch, then throw it into the haystack. When the hay is burning, this will warm up the weed.

Bring it to water is the next step in order to progress. Once the seed has been warmed, you can now pick it up. If you carry it to the edge, you'll notice there is a body of water down below. Hold L2/Left Trigger to aim the seed, so it lands in the water, then R2/Right Trigger to throw the seed.

Follow the seed down to the water, and you'll see the seed has sprouted the root of the mountain. Pick it back up, and head back to Ivaldi to complete the quest!

There are many quests like this in Assassin's Creed: Valhalla, and there are also other quests that make the user pick a choice, such as Where the Stone Falls or Mae the Last Leaf.