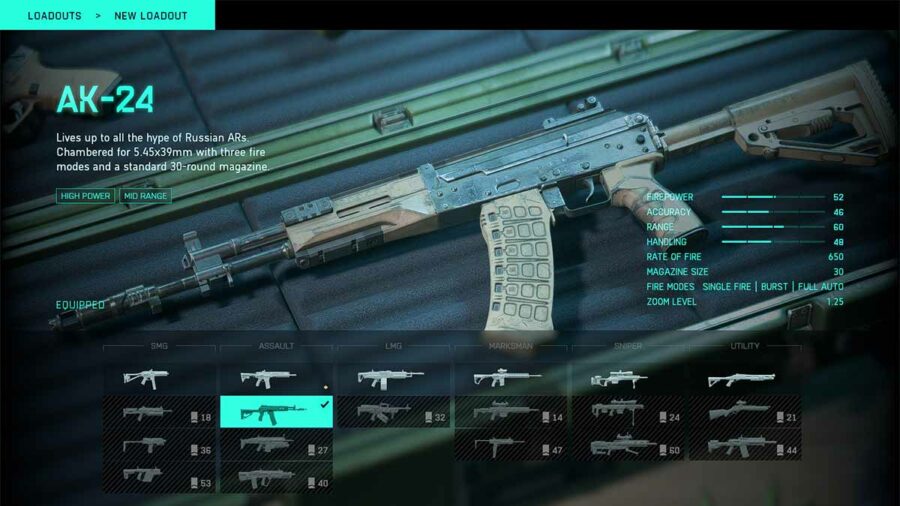 The AK-24 Assault Rifle is unlocked when you reach level 11 in Battlefield 2042. You can unlock the attachments for the AR by completing mastery challenges and then customize your loadout accordingly. Here's how you can build the AK-24 loadout for two different utilization scenarios.

Use the following best AK-24 attachments for a mid to long-range build:

The Shan 2.5x provides optimum magnification for medium-range battles. Regardless, you can use any optic of your choice. The Extended Barrel muzzle and High-Power Extended magazine jointly boost the effective range and ammo capacity of the AK-24 AR.

Their cons include reduced recoil control, fire rate, and reload speed. Since the fire rate reduces significantly, some players opt for the Standard Extended ammunition. This magazine comes with 40 bullets, and only costs reload speed. Finally, equip the LWG Grip for recoil control over range.

Here are the AK-24 attachments you need for a close to mid-range loadout:

There are no Close Combat magazine options for the AK-24, unlike other weapons in Battlefield 2042. Therefore, the best option would be to stick with the Standard Issue rounds. You may use the High-Power standard ammunition, but it only consists of 20 bullets.

The Rattlesnake underbarrel keeps you more accurate while strafing. For the barrel, we recommend the Wrapped Suppressor for sound suppression. However, you may stick to the Factory Barrel if you don't like reducing damage range.