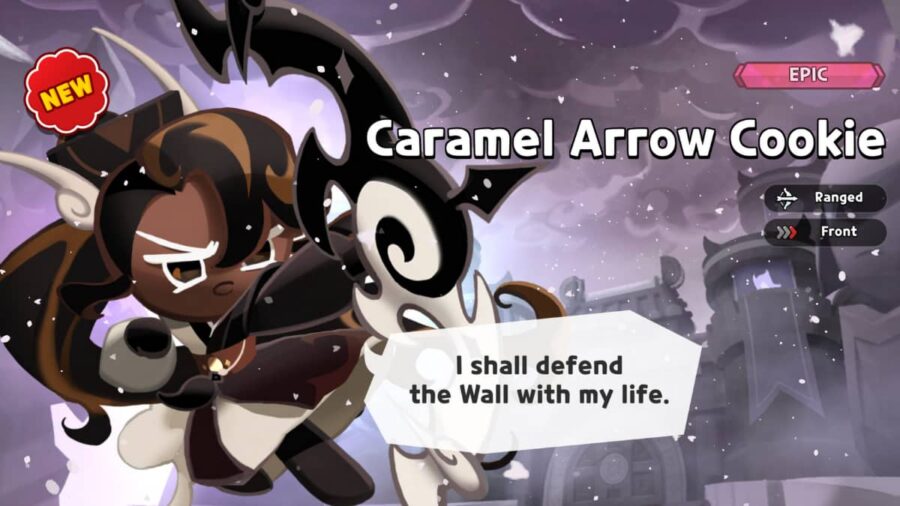 Caramel Arrow Cookie is an Epic Ranged Cookie. But unlike other characters in the Ranged class, she occupies the front position due to her affinity for both close and long-range attacks. She first appeared in the Heroes of Dark Cacao story, having served as the First Watcher of the Dark Cacao Kingdom before her unfair banishment due to Affogato Cookie's schemes.

Caramel Arrow Cookie is best used as a DPS unit against bosses or Arena battles. In particular, she makes up the new one-shot cheese comp alongside Gingerbrave, Kumiho Cookie, Sea Fairy Cookie, and Dark Cacao Cookie.

There are a few ways to build Caramel Arrow Cookie:

Regardless of which build you choose, make sure to slot in Crit Rate bonus stats to further increase Caramel Arrow Cookie's DMG output. If you find it hard to keep her alive on the frontlines, consider adding some DMG Resist bonus stats as well.

For Treasures, opt for DMG-boosting options like the Old Pilgrim's School and Grim-Looking Scythe. Since Caramel Arrow is best used against bosses and the Arena, the Pilgrim's Slingshot could also be viable to carry around.

Check out our guide on the Best Affogato Cookie Toppings build in Cookie Run: Kingdom to build the antagonist of Dark Cacao Kingdom.