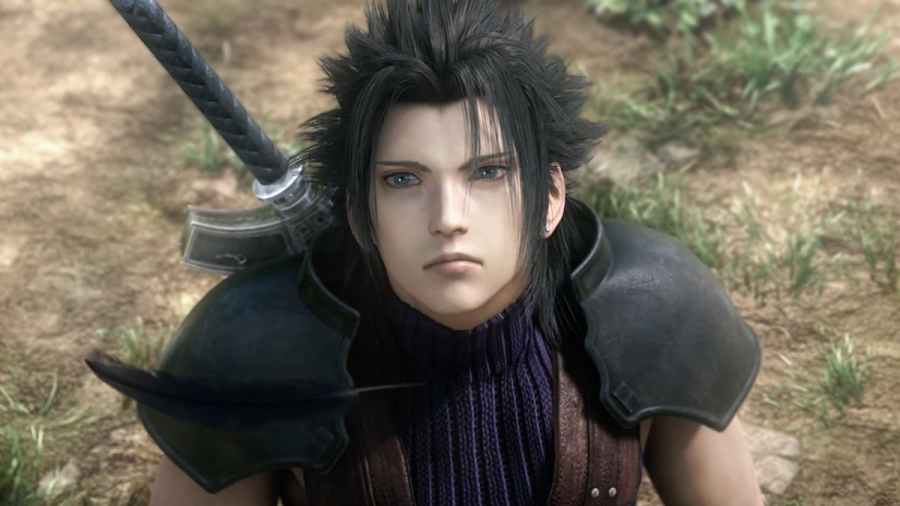 Crisis Core Final Fantasy VII Reunion provides an HD facelift to what were already pretty good graphics. This gives Zack Fair an updated look, and he has never looked better (except for maybe that brief appearance in FF7R). But this update stretches across the entire game to mild success. While the models themselves look good, there is a jankiness that detracts from the visual upgrade that Square Enix gave Crisis Core. This becomes extremely noticeable with the in-game engine and characters talking to one another.

Opposite of this, the cutscenes are rendered fantastically and look like my childhood memories of the original Crisis Core do, but even better. This starkly contrasts the in-game sequences, which look so stiff and devoid of life. I found myself skipping any non-crucial cutscene or just looking away because of how bad they were. While the locations look stunning, they are extremely linear and devoid of any life, appearing like set pieces or stock images rather than an actual environment. Walking through Banora Village or Midgar makes this painfully obvious. So few of the background elements move, it's as if the world is frozen in time, and only Zack can move freely.

Crisis Core's story is largely its greatest asset, and Crisis Core Final Fantasy VII Reunion continues that tradition. The story hits even harder knowing the events of Final Fantasy VII. You get an unstoppable train ride to a fate that shakes up the world of Final Fantasy VII and all those in it forever. Zack Fair may have been a side character casually mentioned in Final Fantasy VII, but he could easily be seen as one of the major driving points alongside Cloud, Aerith, and Sephiroth in this title.

Crisis Core follows Zack and his goal to rise from SOLDIER Second Class to SOLDIER First Class. This would put the eager and brave soldier at the level of legends such as Genesis, Angeal, and Sephiroth. However, everything has a price, and Zack's dream of becoming a hero has a shadow. This shadow is hidden at the start of the game, but each interaction with Angeal, Sephiroth, Aerith, Cloud, and Genesis reveals more and more of what awaits our protagonist. Crisis Core Final Fantasy VII Reunion shows how thin the line between the path of right and wrong can be, and it is one that Zack finds himself walking throughout the game. This delicate balance kept me glued to the story from the very beginning until the very end.

Nostalgia and story aside, Crisis Core Final Fantasy VII Reunion could be more fun to play. From its repetitive combat to its extremely linear levels, this remake shows its age with little updating to a modern game. Combat can easily become frustrating due to the unresponsive dodge, boring combat, and seemingly random challenge. Dodging requires standing still or finishing an attack, which has a lot of lag on them, often leaving you open to attack. The combat involves mashing the same button and occasionally using Materia.

Then you have the randomness of it all. The Digital Mind Wave (DMW) and Limit Break system seem fun, but it's random to the point where I gained a Limit Break almost five times in a single fight but didn't get it for the next ten or more fights. Compound this with how sometimes you have ample time to clear an enemy's Break Point while others are unbreakable outside of a lucky Limit Break, and it quickly becomes frustrating. Furthermore, these unbreakable points can result in instant kill attacks, and some enemies even straight up have Death abilities that kill you in one hit. As a result, I wanted to avoid combat whenever possible until I broke the game with powerful combos, which restored some of the fun for me.

Additionally, outside of combat, things are pretty much the same. Levels are long corridors where you run from point A to point B, engage in too many short random combats, watch several unnecessary cutscenes that could have been explained in one, then repeat. Without the appeal of love for Final Fantasy VII and the fond memories of the original Crisis Core, I doubt I would have been able to push through this dated remake.

Not only does the music sound good, but it also has great cues and flows. This is especially noticed in the cutscene with Sephiroth, Angeal, and Genesis. The transition from The Price of Freedom, build up, and ending with One-Winged Angel when Sephiroth gets serious is truly a masterpiece. There is a reason that Final Fantasy VII's music is iconic and timeless, and Crisis Core Final Fantasy VII Reunion puts this on display throughout the entire game.

Verdict – A shadow of a great experience

For more information on Is Final Fantasy VII Crisis Core canon? and How is Crisis Core FF7 Reunion different from the PSP version? on Pro Game Guides.