Learn everything there is to know with our Destiny 2: Forsaken Gambit Guide! We've got tips and tricks for Gambit to help you survive longer and get more wins. This guide will help you with both sides of the mode with tips for PvE and PvP!

Gambit is a new mode, which was released with Destiny 2 Forsaken expansion. It combines PvE with PvP, so everyone should find something they like about it. However, despite the basic rules being very simple, there are lots of things that you still might not know. In this guide, I'll try to share everything that will make you a better Gambit player. 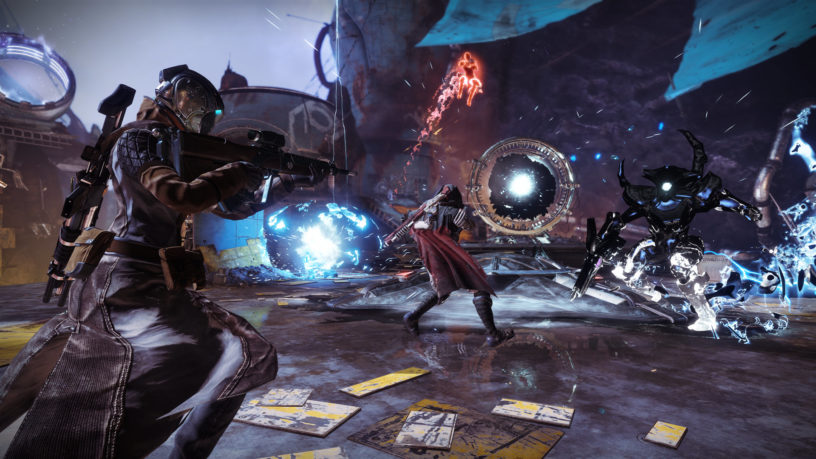 Like I've mentioned already, the basic rules of Gambit are simple. It's a 4v4 mode that mixes PvE with PvP. At the base level, the goal is to kill enemies, who drop motes. Then you collect those motes and bank them. Once your team gets to 75 motes, you summon a Primeval boss - killing it wins the round. One match is Bo3 - the team who wins two rounds first wins the entire thing.

Each player can carry up to 15 motes at a time, and dying means that you lose all of the motes you currently have. When you bank enough motes, you send a so-called "blocker" to the opposing side - you need 5 for a Small Blocker (Taken Phalanx), 10 for a Medium Blocker (Taken Knight) and 15 for a Large Blocker (Taken Ogre). You can't bank motes as long as there's a blocker on your side - you need to kill it first (the same goes for your opponent).

Gambit is like a race, but a race in which you can try to handicap your opponent (while trying to prevent them from doing the same thing to you). You need to be quick about everything - killing minions, banking motes, invading. At the same time, you can't be sloppy - a single mistake can easily cost your life, a lot of motes and potentially an entire match.

There's also a PvP mechanic called "invading" - a few times per match a portal opens, and one member of your team can travel to the other side. Their job is to hunt the opposing Guardians and kill them, slowing down the other team's progress. But be careful, because opponents can also invade your side. The invading player has an advantage, because he gets an extra blue shield (overshield) and sees names of opposing players (with the amount of Motes they're holding) through the walls, knowing their exact positions. If the team is already damaging their Primeval boss, every kill invader makes heals the boss for 12% of its life total. When an invader dies, they are teleported back to their side, and they drop 3 motes.

During the regular course of the Mote phase (before either team summons a Primeval), each team has up to 3 opportunities to invade. The Invasion Portal opens every 25 motes banked - at 25, 50 and 75. And as you can imagine, it's not something you want to miss. Once one of the teams summons a Primeval, if the other still didn't, the Portal will only open for the team which still hasn't summoned it (so it's behind). During that time, you need to be extra careful - you will be fighting a Primeval, all of the adds AND opposing Guardians will invade you constantly.

Once both teams summon a Primeval, it comes with a bunch of adds and two Primeval Envoys - powerful Taken Wizards, which give your team "Primeval Slayer" damage buff once they're down. During the Primeval phase, Invasion Portal once again opens for both teams, roughly every 30 seconds (the clock starts after invader is back), so the entire action is very quick. The simplest goal is to focus down the Primeval Envoys, mind the invaders, invade yourself to disrupt the opponent and heal their boss, and finally take down the Primeval boss as quickly as possible (e.g. use your Power Weapon and Super). The team who does it first wins a round. As you can see, the basic rules are quite clear, but in order to excel in Gambit, you will need to involve more complex strategies, which I will try to lay down below. 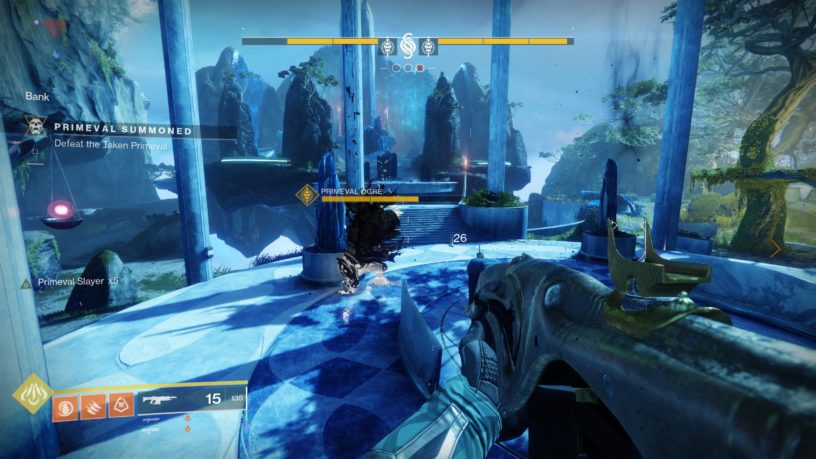 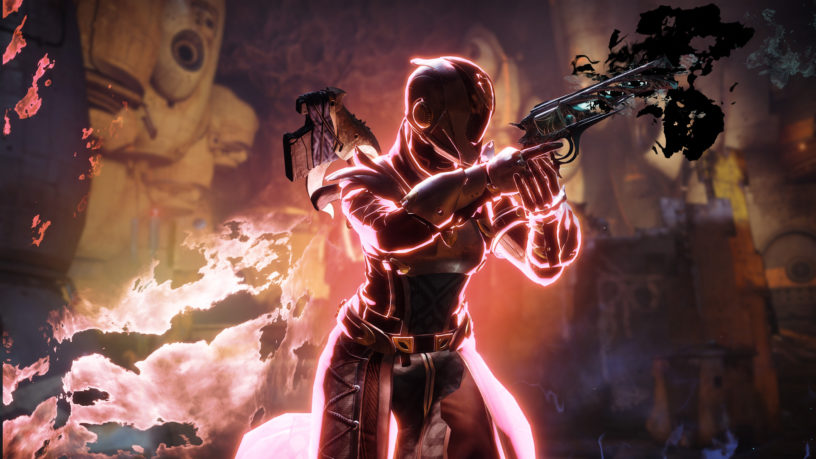 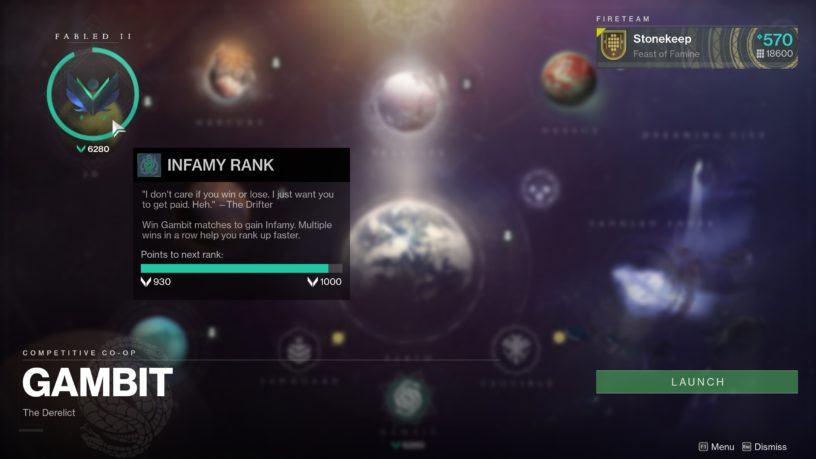 Gambit ranks work similarly to Crucible ranks, with one exception - each rank (besides the highest one - Legendary) is split into three Tiers. Gambit ranks look as follows:

Advancing to a higher Tier (e.g. from Fabled I to Fabled II) gives you a Legendary Gear. Ranking up (e.g. from Guardian III to Brave I), however, gives you a Powerful Gear.

Players get Infamy points for finishing Gambit matches - both winning and losing. Winning, obviously, gives you more points, as well as stacks a winning streak (up to 5 wins). The higher streak you have, the more Infamy Points you will get for each win. However, the real grind starts once you're in the middle of Legendary rank. At that point, loses start awarding you Infamy points - you need to grind wins in order to get there. Once you hit 15,000 Points on Legend rank, you're allowed to reset your ranks. You go back to Guardian I, but you unlock a special reward package you can get from The Drifter - the first one gives you a Trust Hand Cannon, while the second one (if you go through the whole grind and reset again) gives you a Bad Omens Rocket Launcher. Both items are Masterworked to Tier 10 and have curated rolls.

Besides winning or losing Gambit matches, another way to grind the Infamy points are bounties. You can pick up Gambit Bounties from The Drifter (he's in the Bazaar section in the Tower). There are three kinds of bounties you can get - Daily, Hard Daily and Weekly. Daily bounties are easy to complete (things like "Bank 50 motes", or "Summon 2 Primevals") - they generally shouldn't take more than 1 or 2 games to get done - they give you a small amount of Infamy Points (+15). The Hard Daily bounty is, like the name suggests, harder to finish. They include killing powerful (orange/yellow health bar) enemies with specific element, banking 65 motes in a single match etc. They give you a medium amount of Infamy Points (+25), as well as a Legendary Gear. The weekly bounty is not really difficult, but time-consuming - you will likely have to play a lot of matches to complete it, but you will get it in time. It gives you a lot of Infamy Points (+75) as well as a Powerful Gear, so it's worth doing.

As an extra note, the Malfeasance Exotic Hand Cannon Quest starts right here in Gambit. A new Primeval boss has a chance to spawn, killing it drops an item that starts the entire Quest chain.

There's nothing you can really do to get the boss other than grinding Gambit. Just remember that even if you get it to spawn, you still need to kill it, if you lose the round, you won't get the Quest.

If you want to learn more, check out our Malfeasance Quest guide!