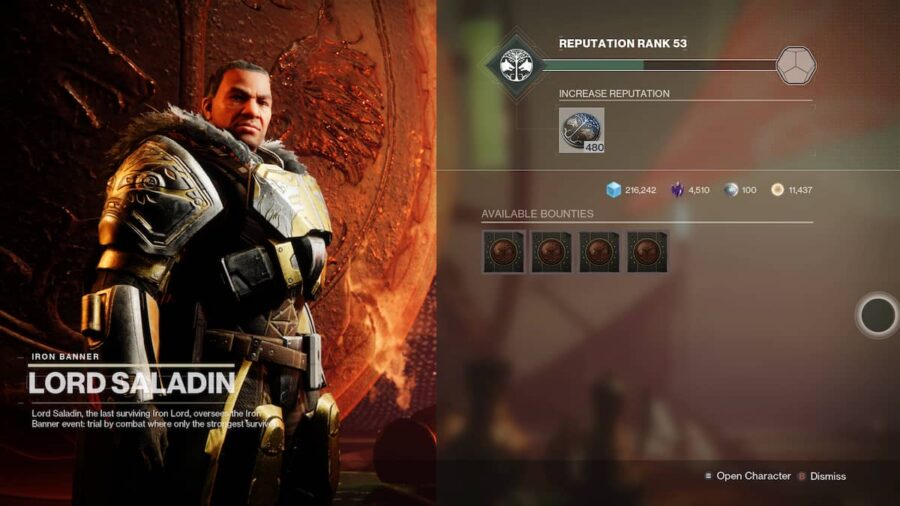 Few events inspire such immense feelings in Guardians as Iron Banner. It's an intense competition that only comes around a few times in a Season but still manages to rile the Guardian hornet nest. But what is the Iron Banner and why do Guardians participate?

What is Destiny 2's Iron Banner

The Iron Banner is a week-long contest between Guardians that was hosted by Lord Saladin once a month. Beginning with Season of the Haunted, this was changed to two events per season. It is a right of proving, meant to forge Guardians with the most rigorous combat exercises. To add an extra element of challenge to the event, Guardian Light Levels were put into consideration with higher level Guardians being able to take and deal more damage. This too was changed with Season of the Haunted in Destiny 2.

Iron Banner is hosted by one of the last Iron Lords, Lord Saladin (Valus Forge). The Iron Lords were among the first Risen to appear after the Collapse. Where some Risen used their powers to become warlords, the Iron Lords fought for the people and strove to bring balance to the remnants of Earth.

As the threats to humanity grew and the Iron Lords' ranks began to dwindle, Lord Saladin began hosting the tournament to train up a new batch of Iron Lords. Taking a page from his former pupil, Lord Shaxx, Lord Saladin found the Crucible to be the most fitting theater of combat to train these Guardians. Those that perform well and are able to meet the requirements can earn gear inspired by the Iron Lords and even the Iron Lord title itself.

The Iron Banner is a short, intense week of brutal PvP. It acts as an intermediary between the regular Crucible and Trials of Osiris modes. With Season of the Haunted and Season of Plunder, Bungie has begun to tinker with the Iron Banner formula and is changing things up like the game mode, Light Level requirement, and other things. It's a good way to shift up the meta and keep the event from growing stale. The same rules apply though. Play smart, safe, and let the wolves howl to press your advantage, Guardian.

For more Destiny 2 goodies, check out Who are the Cabal in Destiny 2? – Lore on Pro Game Guides.