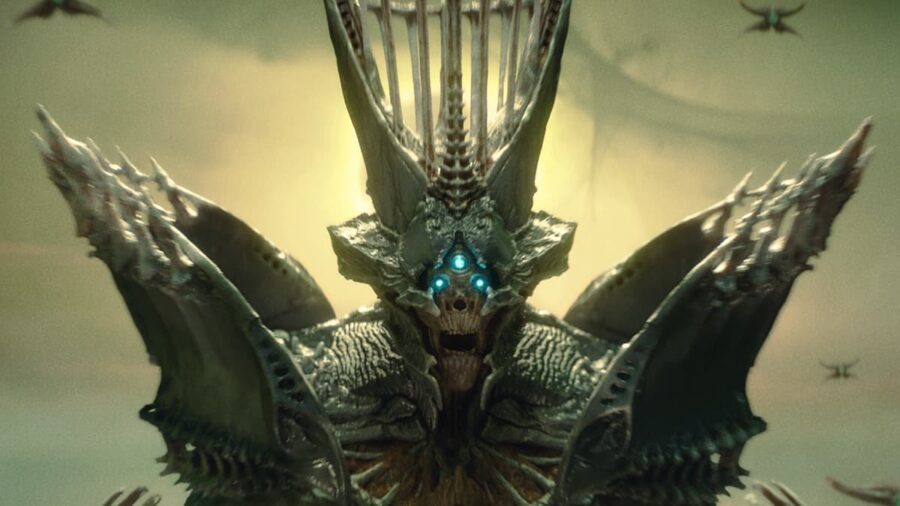 Taox is the former tutor and mentor to Oryx, Savathun, and Xivu Arath in Destiny 2's Hive lore. She was first mentioned during The Taken King expansion in Destiny, specifically in the Books of Sorrow.

Long before the Hive were the Proto-Hive, this species of insect-like creatures lived on a planet called the Fundament. Taox, being a sterile mother gifted with a longer than average life span and being of no threat to the throne, was a teacher to the royal offspring of the Osmium Court, the king's three daughters.

Related: Who is Hashladun in the Scarlet Keep Nightfall? — Destiny 2 Lore

When the Osmium king began to show signs of madness, Taox realized that his time was drawing to an end. Fearing that the daughters weren't fit to rule the throne, she sought to betray the royal family. Taox invited the rival Helium Court to the Osmium Court to assassinate the royal family and thus make her regent of the continent. While the plot was mostly successful, the three daughters were able to escape.

Taox is believed to have ruled over the Osmium Court for an unknown time. One day, the three daughters returned, having been transformed by their worms into Oryx, Savathun, and Xivu Arath. These leaders of the Hive began to spread worms into the Proto-Hive, building an army that took back the Osmium Court and demolished the Helium Court. However, the Traitor Mother Taox was able to escape.

The Hive chased Taox to the Hyrdogen Fountain before forcing her retreat to Kaharn Atoll. Yet again, the Hive overran Taox's forces, and Taox was forced to flee.

Taking a spaceship to the capital of the Ammonite, a people that ruled the 52 moons of Fundament, Taox was granted asylum. However, the three daughters would not be denied their revenge and took to the skies in pursuit. In the end, Fundament and all of its moons were under the control of the Hive.

Roughly 24,000 years later, Taox's spaceship was found by the Dakaua with Taox still in cryo. This happened to be when the Dakaua and Ecumene were dealing with their own invasion by the Hive. Taox relayed the information she had on the Hive and their leaders. However, this was in vain as the Hive vanquished their foes yet again.

For the last recorded time, Taox fled. Her fate is unknown, but Taox will continue to be hunted so long as one of the Osmium Court's daughters remain.

For more Destiny guides, check out How to focus Umbral Engrams in Destiny 2: The Witch Queen right here on Pro Game Guides.