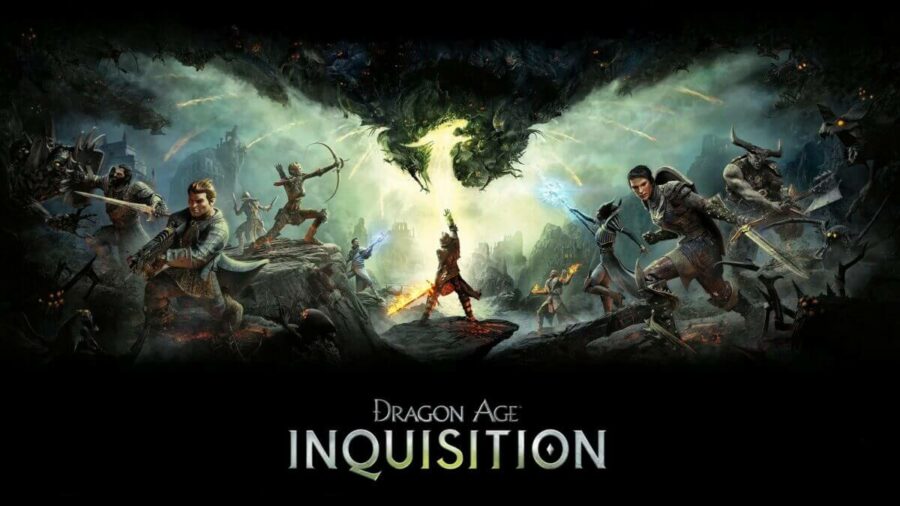 Despite the game series title, dragons are not as common in Dragon Age: Inquisition as they are in many other fantasy RPGs. There are eleven high dragons in DA:I that will put up a serious fight (thank goodness for potions). Killing four will cause Leliana to acknowledge your dragon hunting prowess at the war table, which may be even better than the "Dragon's Bane" achievement you unlock after killing ten.

Below, we've listed the locations of each high dragon in order of weakest to strongest.

You can find the Fereldan Frostback in the northeast area of the Hinterlands, just above Dusklight Camp. This dragon is resistant to Fire, but vulnerable to Frost, so use your iciest attacks.

To reach Northern Hunter, you'll first need to drain the Crestwood lake in the Still Waters side quest. Afterwards, this Electricity-dealing dragon will move to a spot southwest of Three Trout Farm Camp, in the ruins near the Fereldan Wyvern Statues. Use Spirit to target Northern Hunter's weakness.

Similar to the first dragon in this list, Abyssal High Dragon has a Greater Fire Resistance and is vulnerable to Frost. Complete the questline for Frederic, who is stationed to the south of Nazaire's Pass Camp, in order to summon Abyssal High Dragon. Evasive strategies work well here, since this dragon moves around a lot.

Gamordan Stormrider is found in the far northeast of the Exalted Plains, in the Crow Fens. Take care not to stand in bodies of water during this fight, since this dragon uses Electricity attacks and can easily take out your party members by combining the two elements. Take advantage of Gamordan Stormrider's vulnerability to Spirit.

Greater Mistral is the first high dragon that deals Frost damage and has a weakness to Fire. This dragon is located in the northern part of Emerald Graves, just northwest of the Din'an Hanin landmark.

Note: We recommend finishing the Breeding Grounds quest before hunting Hivernal, as this quest can not be completed if one of the three quest dragons have been killed.

A Frost dragon with a Fire vulnerability, Hivernal is found to the far east of Emprise du Lion, just past Judicael's Crossing (you'll need to first repair the bridge via the war table scouting mission).

Vinsomer, who uses Electricity attacks and has a weakness to Spirit, has taken up residence on Dragon Island, northwest off the Storm Coast. To reach this island, you'll need to complete the war table mission Red Templars on the Storm Coast, which will open access to a locked dwarven ruins. At the end of the ruins is a boat you'll then take to Dragon Island.

Sandy Howler is located to the east of the Hissing Wastes, near the Tomb of Fairel. You can encounter this dragon by traveling northeast from the Cove Camp. Avoid Sandy Howler's Fire attacks and use Frost to target its weakness, and make sure to take down the dragonlings she summons quickly.

Note: We recommend finishing the Breeding Grounds quest before hunting Kaltenzahn, as this quest can not be completed if one of the three quest dragons have been killed.

Find Kaltenzahn by taking Judicael's Crossing and heading northeast. She deals Frost damage, is vulnerable to Fire, and will summon 2-5 dragonlings that can kill your party members if you try to ignore them.

Note: We recommend finishing the Breeding Grounds quest before hunting Highland Ravager, as this quest can not be completed if one of the three quest dragons have been killed.

Highland Ravager is found just north above Kaltenzahn's location, past Judicael's Crossing. Excluding the DLC addition of Hakkon Wintersbreath, this is the strongest high dragon in the game, so make sure you come prepared with Fire resistance potions and your best Frost attacks, to which she is weak to.

The most powerful high dragon in Dragon Age: Inquisition deals Frost damage and is weak to Fire. Her location in Frostback Basin will be marked on your map for the Hakkon Wintersbreath questline.

Looking for more Dragon Age content? Don't forget to check out Dragon Age Inquisition Cheats and Console Command List to make the most of your gameplay.

All Specializations in Dragon Age Inquisition

How to Romance Cassandra in Dragon Age Inquisition

Should you choose Mage or Templar in Dragon Age: Inquisition?

What is the Max Level in Dragon Age: Inquisition?