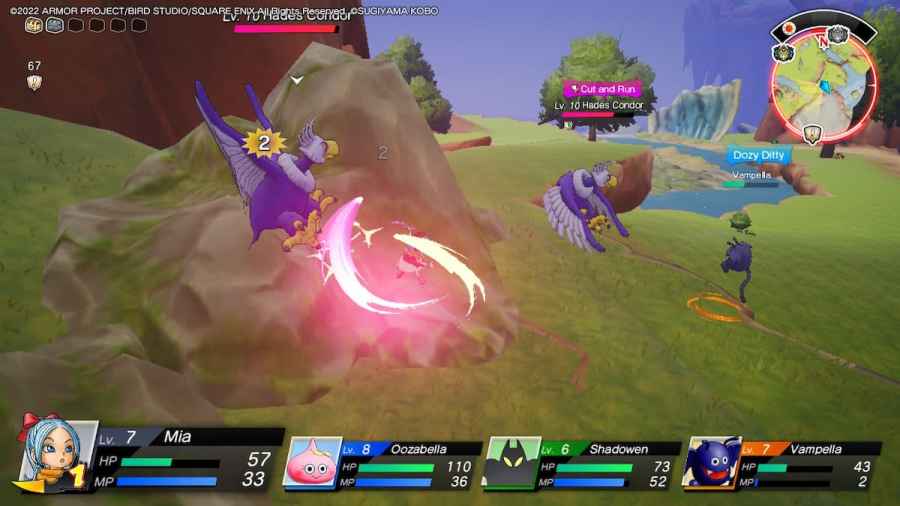 What monsters should you recruit first in Dragon Quest Treasures?

King Slime is a monster that you can recruit as early as your first journey into The Paternoggin. At level 20, it appears near the waterfall where you found Royal Soil. It learns a lot of useful fire spells and physical abilities, making it a great offensive member of your party. Plus, it’s big! And its size perfectly testifies to its defensive capabilities as well.

While it is more often seen in The Maneland, Hades Condor can be found in The Paternoggin at level 10. You just need to climb up the cliffs near the waterfalls between Palatial Plains and Teardrop Falls. It’s not the best monster defensively, but it has a ton of ranged attacks to make up for it. It also has Heal, which it will automatically use if any of your party members are on critical HP.

Related: How to equip Medals in Dragon Quest Treasures

They’re very difficult to recruit, but Dune Stalkers will absolutely carry your team’s offense if you train one up to a higher level. They’re very common spawns in The Maneland at levels 15 to 18. Just go into open desert areas.

If you need a monster with a Stealth Forte, skip the Shadows and head into The Maneland to look for a Greasy Palm. There are a couple of them bathing right in front of the first station (Bonedry Heights) at levels five to 12, depending on when you journey into the area (since level scales in this game). They have good defenses, decent spells, and a ton of AoE attacks.

Golems are another species of powerful monsters that spawn in The Paternoggin, specifically at night. You can find one on in Palatial Plains where all the Restless Armors are. It’s at a fairly high level from the get-go (around 12 to 18) and very hard to recruit even with Buddy Bullets. However, your efforts will pay off tenfold! It’s a little slow but it has really good resistances, wide attack ranges, and number of treasure slots.

You can also find a level 27 Golem in The Manelands if you’re willing to risk it. Again, it’s slow so it’s easy to avoid its attack. Also, we found that at roughly levels 12 to 15, two to three special attacks (R button) from a monster should defeat it.