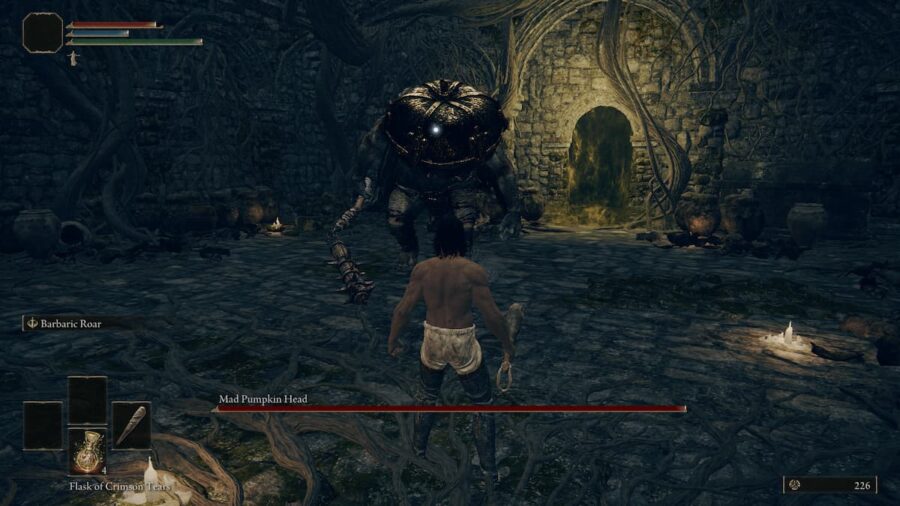 Pumpkin Head can be found in the Waypoint Ruins and is the roadblock in front of the sorcery teacher. It can be encountered in the overworld as well and has the same attack pattern as its boss variant. It possesses only a few attacks and they all are telegraphed well enough to know which move is coming out during the animation. Pumpkin Head can be tricky for ranged characters but entirely doable with well timed attacks.

How to beat Pumpkin Head in Waypoint Ruins

The massive giant of a boss, Pumpkin Head, has a few sweeping moves that can hit its side. Sticking to the rear is a safe option, however, players should avoid spending all their Stamina to attack as not having enough Stamina for emergency rolls is how most players get caught in attacks. Some attacks are able to be strafed, simply by walking in the opposite direction of the attack to avoid damage. Ranged characters that are locked onto the boss will often hit its head, which has significantly more defense than the rest of the body. Rolling through attacks or waiting for Pumpkin Head to be locked in an animation is the best way for ranged players to get damage in on the body.

The most common move players will see coming from Pumpkin Head is a two-hit combo using its flail. This attack is easy to spot as the boss will raise its flail to the player's left and then swing twice. Both swings will be horizontal and players can roll towards the rear during the animation to both avoid getting hit and to get damage in while it is locked into its swings. Players can roll away from the attack as well, getting distance to heal or do ranged attacks while it is unable to close in.

Pumpkin Head's most punishable, and higher damaging attack, is a frontal slam. This move is a slow vertical attack that the boss will start the animation off by spinning its flail and then raising the weapon and slamming. Getting caught in this attack will deal tons of damage, however, it is easy to spot and avoid. Ranged players can just run backward while firing off projectiles and melee characters can strafe or roll the attack to end up behind it. The slam itself has a larger hitbox than it appears to, making it necessary be about a roll away to avoid damage from the impact.

Related: Where to find the best early weapon in Elden Ring?

Pumpkin Head has an additional attack that can be used to extend one of its other moves. Its downward punch can be used on its own or after a downward slam. The slam attack itself is quicker than its windup version but it doesn't do nearly as much damage. This is telegraphed by Pumpkin Head raising its flail in the air and then immediately slamming down. If there is no follow up, players are free to get damage in, but it will often pair this move up with the punch. The punch on its own is a quick attack that players can dodge into or away from. This attack is a combo ender and is safe to attack after the animation is over and before it goes into its next attack.

Pumpkin Head's downward slam can be combo'd into with a separate starting move, an uppercut. The uppercut's telegraph isn't too different from its other attacks and will extend its arm nearly behind it before performing its attack. It will follow this attack with its downward slam and players familiar with dodging this move on its own will have an easy time rolling through the attack. Ranged players can dodge backward from the initial uppercut and start to deal damage as the downward slam doesn't have much range. Melee characters can dodge the uppercut by rolling to the boss's side or rear and start attacking immediately as the downward slam will only hit those in front of Pumpkin Head.

Related: How to defeat the Tree Sentinel in Elden Ring

Players who attack Pumpkin Head's side can get caught up in the boss's quick turn swing. This attack has Pumpkin Head quickly turn towards anything on its side to do a single horizontal swing with its flail. It does this attack most often against players that attack the side or the rear of the boss. It repositions itself quickly so it can use its other attacks after. Getting back into a good position from this is easy enough, however, as knowing how to dodge the other attacks is fairly straightforward. Noticing this attack is difficult for players that are close to Pumpkin Head as the camera can be obscured by the boss's head. This is because the animation looks very similar to the start of its double horizontal swing. Players attacking the sides will know to roll from that move anyway so players can feel safe knowing that once they learned that move's patterns, they will know this single move as well.

Pumpkin Head's deadliest attack and greatest defense is its massive head. It will use its head to perform a head slam that has tracking. This is to say, it will target the player regardless of position and attempt to attack them. Strafing this attack is very difficult and the safest strategy is to roll towards or away from the attack. Rolling inwards will allow players to get damage in while rolling away gives the player some time to heal. Ranged players will struggle to roll away from the head slam as it covers most of its hitbox with its big head. Waiting for other attacks or dodging towards Pumpkin Head to get damage in is much better as attacking the head will deal little to no damage. The area of effect for the slam is pretty big so a late roll will cause the player to still get hit.

For more Elden Ring guides, check out How to beat the Crucible Knight in Elden Ring? on Pro Game Guides.

How to beat Pumpkin Head in Elden Ring?