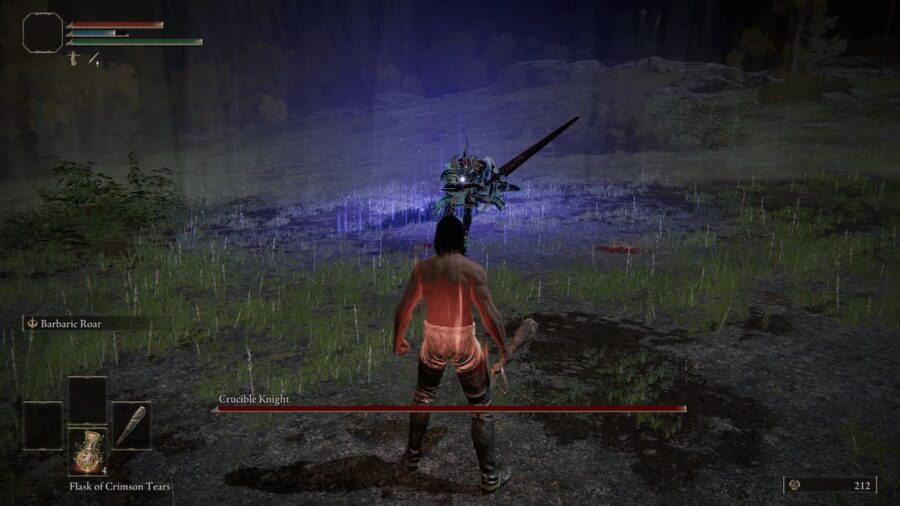 The Crucible Knight is the earliest boss within an Evergaol in the game. It has two phases, can be parried, and has both swift and delayed attacks. The boss telegraphs well enough but these moves can come out mid swing or mid roll, hitting players in the middle of these animations. Its attacks may seem relentless, but it's got very limited range and won't pursue the player at too fast a speed if they decide to distance themselves for a sip.

How to beat the Crucible Knight at Stormhill Evergaol

The Crucible Knight is accessed by going into the Evergaol in Stormhill. This is accessed by going West and then South of Gatefront, heading towards the cliff. Should players die, their lost Runes are recoverable outside of the arena where they died so there is no need to go back in to recover anything. Most of the boss's attacks with its sword can be parried, but players will need to roll out of the way of its tail attacks. It's diving attack can be avoided by either rolling into it, or rolling in the same direction at the right time to get some hits off.

The most basic attacks that the Crucible Knight will do are a basic front and side swing. This attack has no follow-up and only requires a single dodge or block before the player can attack. This move can be parried and it is easy to spot as the boss will raise its sword before doing an attack that hits vertically and to its side. The end of the swing will cleave to the right, making it possible to catch players in the middle of their roll animation. The best way around this is to dodge into the boss itself or roll towards the back of the boss to get some hits in. Ranged players can instead attack during the animation so long as they are far enough away.

Attacking the boss while it is holding its shield will provoke it into doing a shield bash. Melee players can hit the shield once and once Crucible Knight does his shield bash, they can roll with the attack and immediately do a rolling attack for more damage. The telegraph for the attack is noticeable as there is an audio and visual cue for it. The boss will hold the shield to cover its body, making a clunky sound before attacking. Ranged characters can have difficulty with the boss guarding the entire time, but provoking this attack while in melee range is an effective way of getting them to lower their guard once the animation is over.

Crucible Knight's most common combo will be a two-hit combo. This starts with a horizontal swing followed by the same vertical swing. Both have the same timing to roll and both can be parried. The telegraph for this involves the Crucible Knight positioning its sword towards itself, readying the weapon to be swung outwardly. Rolling towards the boss or towards its rear will give the player time for extra hits. For ranged builds, baiting out this attack while in melee range and then quickly sprinting away while it is still swinging is the optimal time to use projectiles. Occasionally a third swing will happen, but if the player is behind the boss, it will always miss.

The most difficult part of the first phase of the fight is avoiding Crucible Knight's stomp and three-hit combo. The stomp has a lot of range, but can be rolled into. Following this stomp is a frontal slam followed by a delayed swipe that is then immediately followed up with a second swing. After rolling out of the way of the slam, ranged players can start sprinting backward while the boss is stuck in its three-hit animation. This is the perfect opportunity to attack multiple times until they put their shield up again. For melee players, this requires more dodging. After the roll, the first frontal slam can be rolled into or avoided by rolling towards the rear. The delayed attack is tricky but after some practice it's easy to know when to roll. The third hit requires a roll almost immediately after the previous swing.

The shield bash attack is more often followed up with other combos in the second phase. Additionally, the vertical swing and double slash attacks can be followed up with a fast tail swipe. Dodging towards the tail is the best way of avoiding damage, but players may struggle to get in damage as Crucible Knight is much more aggressive during the second phase. After the tail swipe, there is a brief window in which players can attack or heal. Crucible Knight can also use its tail swipe after its stomp. After each tail swipe, there is time to deal damage, but it is very brief.

Related: How to defeat the Tree Sentinel in Elden Ring

The Crucible Knight can leap into the air, sprouting wings before diving down at the player. This can be avoided in two ways. The easiest way to avoid this is to sprint toward the boss during the animation. If there is enough time to get underneath it, it won't be able to hit the player. If there isn't enough time, rolling into the swooping attack is the safest way to dodge it. For players wanting a more risky play, they can roll with the attack, moving with the boss while it lands and having time to get an attack or two off. This attack can occur at the end of any of its combos and can create a lot of distance and the chance to heal.

The last move in the Crucible Knight's arsenal is a large area of effect tail swipe. It will do a second swipe right after the first one. The first swipe has a decent amount of range, about two rolls distance away. The second swipe has a much large range, able to hit ranged players or interrupt a far heal. In melee range, players can dodge both of these tail swipes and have time to attack them before it transitions to other combos. For ranged characters, they have ample time to attack after the swipes if they prefer to stay in medium proximity to attack. Otherwise, running off from this attack to restock on FP or crafting arrows is a safe option.

For more Elden Ring guides, check out How to beat the Erdtree Burial Watchdog in Elden Ring? on Pro Game Guides.

How to beat the Crucible Knight in Elden Ring?