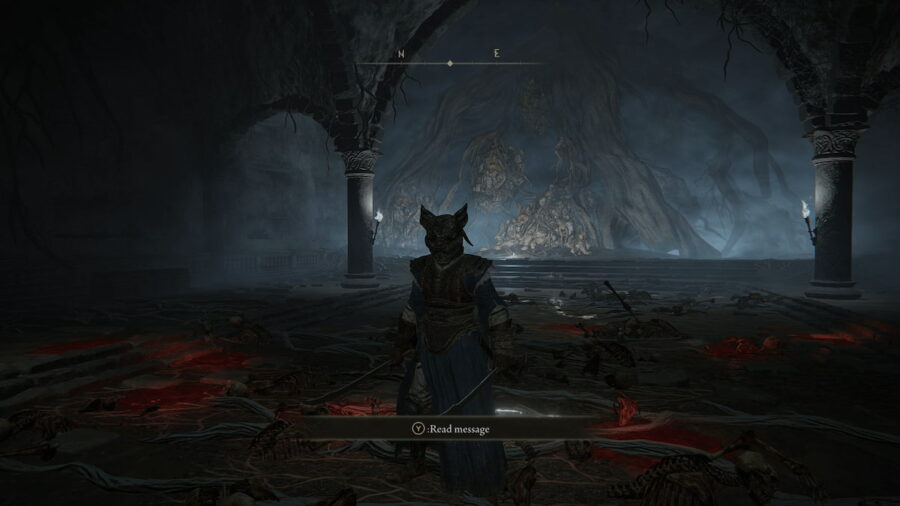 The statue that breathes fire can be tricky to take on, but learning its telegraphed moves will help in the fight. There are additional resources available to players right at the start of the game that will help in the fight like weapon upgrades, Ash Summoning, and using Grease. These are the tips and tricks for fighting Erdtree Burial Watchdog in Elden Ring.

How to beat Erdtree Burial Watchdog at Stormfront Catacombs

There are several strategies when fighting Erdtree that vary depending on what the player is using. With this fight being so close to the beginning of the game, it's likely that players will be going in with their starting equipment.

Getting in close with melee weapons might seem challenging at first, but the Watchdog telegraphs its moves well enough to find direct openings. While it is on its hind legs, it will slam its weapon into the ground if the player is close enough. This attack can be avoided entirely by baiting the attack and rolling towards the back of it or by strafing the attack and sticking to its rear. It has a tail and sideswiping move it will use while on all fours, but while on its hind legs, it can't respond to being hit from behind unless it jumps into the air to do a slam attack.

As a melee character, players should quickly run if the Watchdog goes into the air. The slam attack can deplete all of a player's Stamina if they are blocking with a shield as well. Because it is an area-of-effect slam, this will send players flying back if they are close enough to the boss. Right after the slam and running in, there is enough time to get one to two hits in before rolling away. These slams can happen one after another so making sure that there is enough Stamina after a hit to be able to roll is vitally important. When attacking from behind, the Watchdog can turn its head and attack with its tail so staring at both its tail and the direction it is facing can help players know when to get out.

Related: Where to find Alexander the Iron Fist in Elden Ring

When healing, it is important to continually walk backward as Watchdog's thrusting attack can reach fairly far. The telegraph for this is its right hind leg and right arm moving back before attacking. This can be dodged or strafed quite easily, however, getting caught in the healing animation will be met with some punishing damage. Melee attackers will find openings the more they recognize the telegraph for each attack, but the general rule is to get one or two hits and dodge an attack before attacking anymore.

During its fire attack, running around it can sometimes be the better option over running directly away if the player is already in melee range. If more than a roll away, running to the other side of the room is the safest option. Spacing out attacks, knowing when to roll away and disengage, and managing Stamina are the basic necessities that every player needs to overcome every boss in the game.

Bows and the various magic types in the game will make this fight much different than fighting it as a melee. When fighting at a distance, the Erdtree Burial Watchdog will constantly try to do either its slam attack after rising in the air, or it will go on its hind legs to attack. If within reach, it will attempt to do its thrust attacks, especially when recovering FP or healing. The attacks it does are limited, but it will continually spam them, making it seem relentless. Keeping distance will ensure victory as a close slam attack is the only move that requires a well timed roll to avoid damage. Using faster ranged attacks is preferable, but even a slow projectile in between kiting will get the job done.

During the fire attack, there is time to fire off a few shots if there is enough distance between the player and the Watchdog. It will continually move in the direction of the player, but it will always stand still while breathing its flame. Even with the Astrologian starting class, players have enough range to continually use their Glintstone Pebbles while at the edge of flame. To maximize damage, players can shoot at the Watchdog while it is up in the air and dodge when it comes in for the slam. Casting Spells and firing arrows consumes Stamina so players should be sure to pay attention to their bar to ensure they always have enough for a last second roll.

Players that haven't traversed to areas further down the path of the main story will have to upgrade their weapons at a Smithing Table. One can be found at the Church of Elleh just North of The First Step. Using Smithing Stones, players can upgrade weapons up to three times. To upgrade further, players will have to advance further in the game until they reach the Roundtable Hold. There, they can use higher level Smithing Stones to upgrade their weapons up to +25. Ashes of War will also increase a weapon's scaling, further making a weapon fit into a player's desired playstyle.

Ashes are NPC Summons that the player can send in to fight during key battles. The item required to use them is called the Spirit Calling Bell and can be found by talking to Renna at the Church of Elleh at night. Speaking with her will reward players both the Bell and their first Summon, the Lone Wolf Ashes. Using these summons will spawn NPCs to aid the player in battle at the cost of some FP. During combat with the Erdtree Burial Watchdog, aggro is shared between all the characters, making it easy to step away from the boss while healing. This enables the player to play more aggressively when the focus isn't on them as well, effectively doing more attacks for more damage.

For more Elden Ring guides, check out What items should you buy from Kale at the Church of Elleh in Elden Ring? on Pro Game Guides.

How to beat the Erdtree Burial Watchdog in Elden Ring?