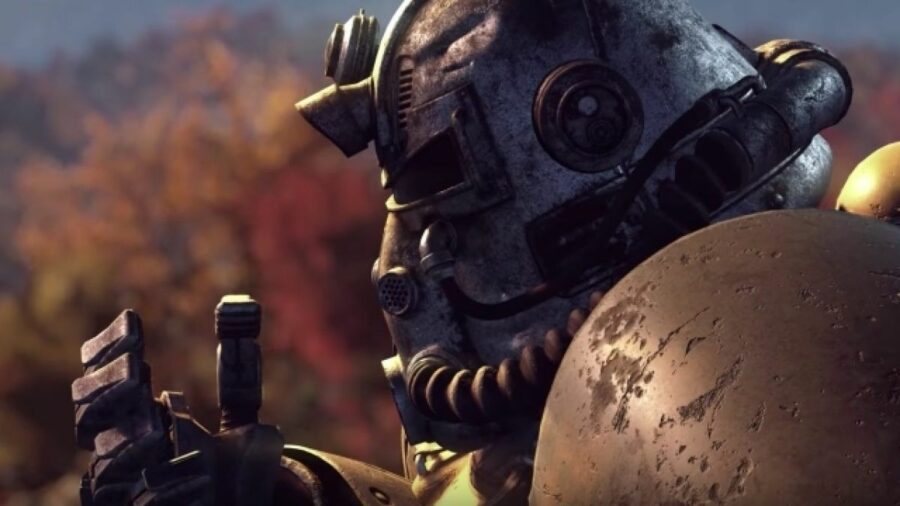 One of the best things about the newer games in the Fallout series is that you get to wear power armor. In both Fallout 4 and Fallout 76 you are able to don the most powerful protective gear in the game. But in 76 it is arguably even better as you can wreak havoc on your online buddies/opponents. To do that though you first need to know where to find the armor.

All Power Armor Locations in Fallout 76

Even though armor will always show up at these places, they are subject to random spawn times. So, if you rock up at one of the points mentioned and think your game has glitched then don't worry. Just check back at a later time and the armor will pop up at some point. 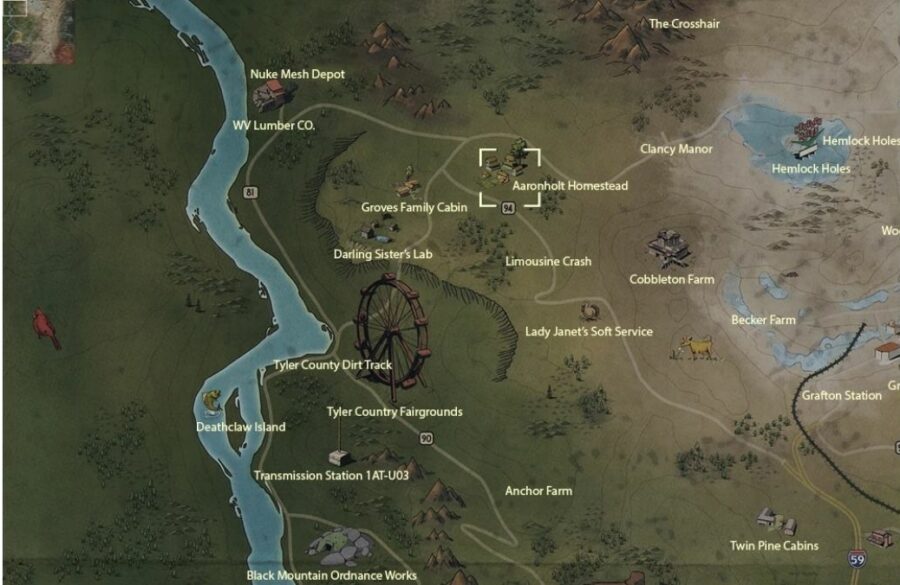 North along Route 94 you will find this homestead. You will notice a Shed situated by some grain silos and a power generator. You can attempt to pick the lock but if that's a no go you will need to pilfer the key from a nearby body. Once unlocked you will be able to grab the power armor. 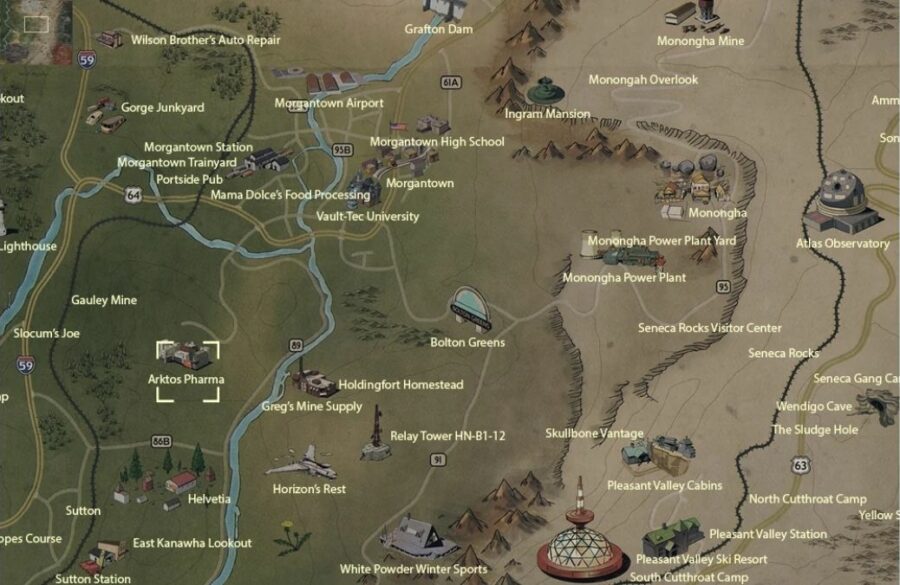 Arktos Pharma can be found East of Route 59 and North of Route 86B. When you approach it you will see a garage on the left hand side. You will need to access this area through a gap in the roof, so traverse the buses and stairs to reach the building and then hop on down. Find the computer terminal and hack it (it's a level zero so is quite easy) and you will reach the armor locked behind the door. 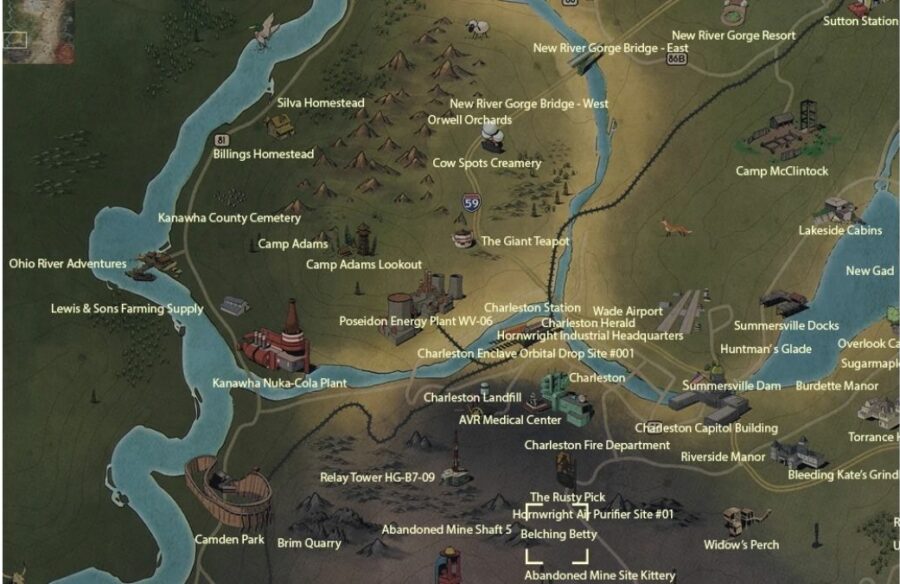 This location will be East of Camden Park. Head to the Burning Mine on the East side of the Ash Heap to find the power armor situated here. 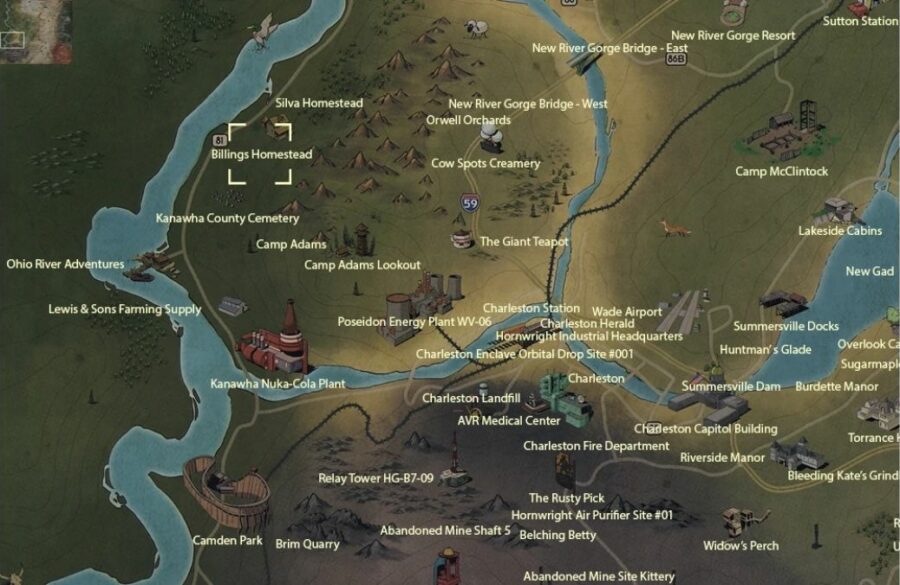 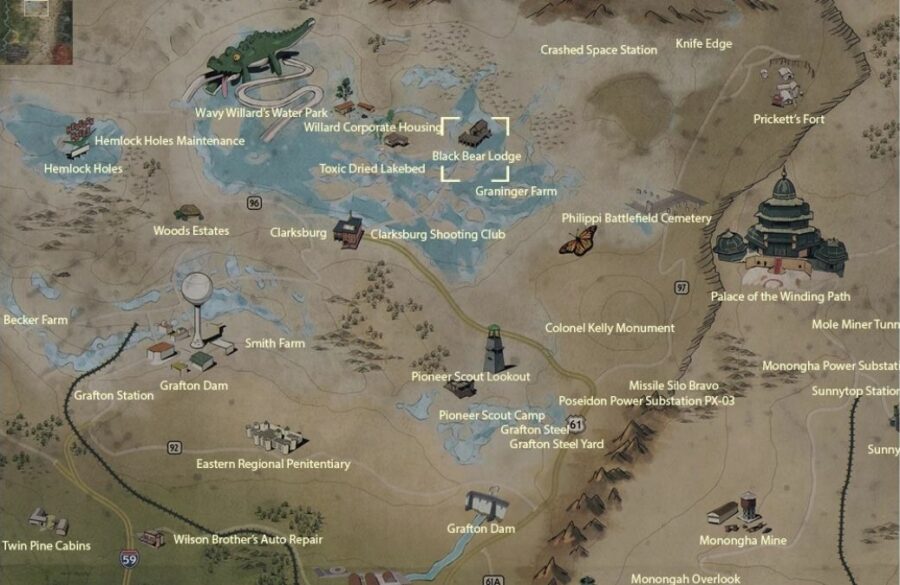 This armor is North West of the Palace of the Winding Path and not too far from Route 96. Upon reaching Black Bear Lodge you will encounter a Barn that has been struck by a tree near the big building. You will find the armor inside that barn.

Related: Where to get Ballistic Fiber in Fallout 76 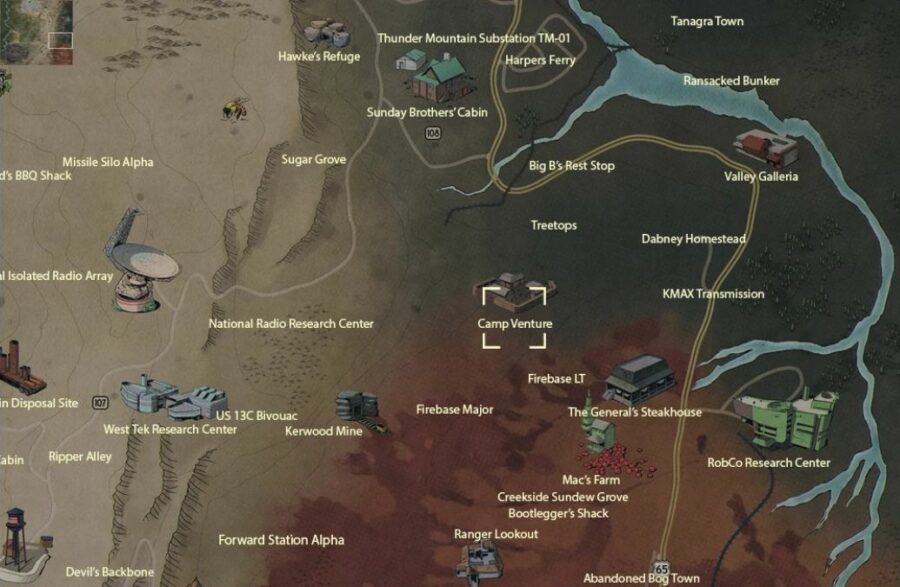 Along Route 65 and North West of the RobCo Research Lab you will find Camp Venture, holding some power armor in the yard. 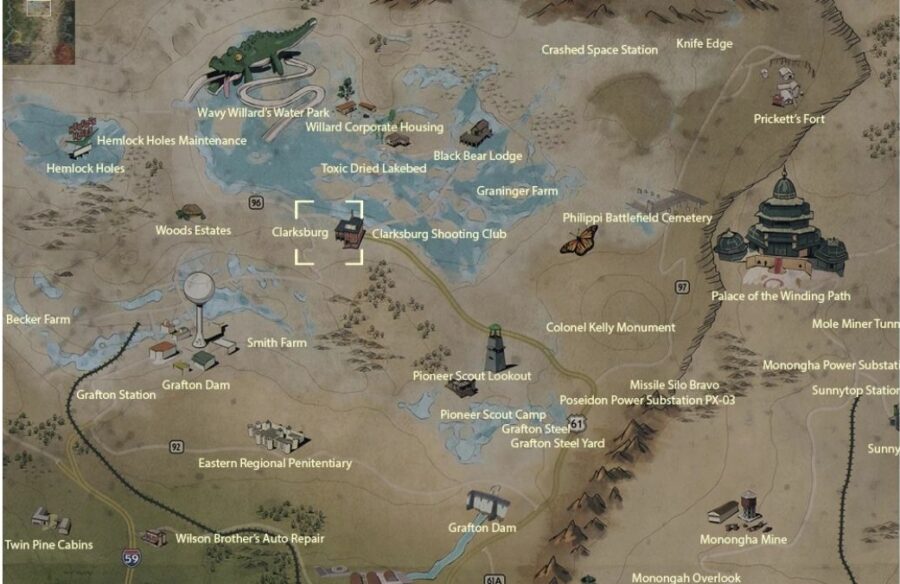 Follow Route 61 up past Grafton Dam, and at the end of the road you will find Clarksburg. There will be a tall building with a fire escape attached which isn't accessible from the ground. Make your way behind it and you will see a barricade which reads “Man Before Machine”. Go up the stairs and around the roof to the right and you see the fire escape from before. Head up another floor and you will find the power armor. 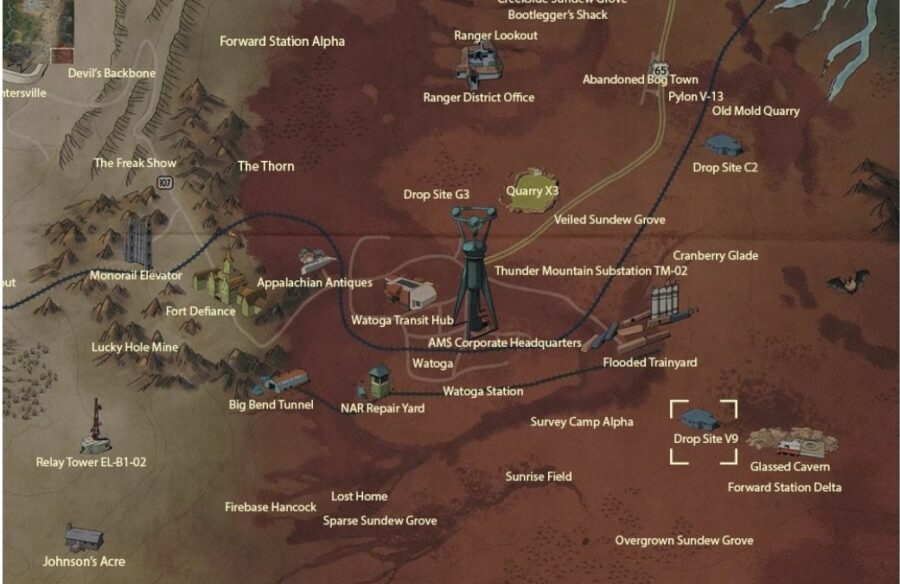 Not to be confused with Drop Sites C2 and G3, you will find Drop Site V9 further below on the map to the South. You will find the armor directly in the drop site. Make sure to head on over to Survey Camp Alpha as well to the West of V9 to grab some more armor. 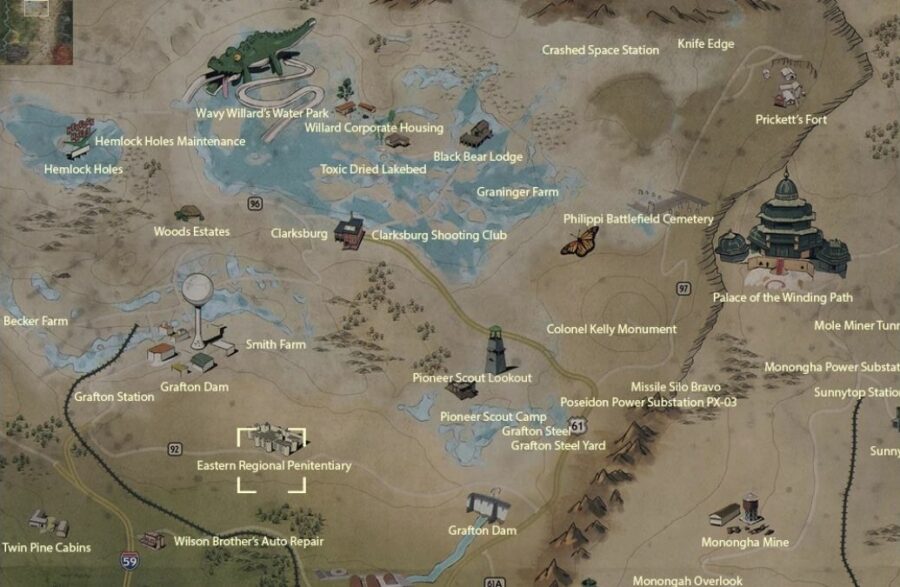 South of previously mentioned Clarksburg and West of Grafton Dam you will find the penitentiary infested by Super Mutants. There is a level warning for this one as it can be quite tough. Head around the back and enter through the hole in the wall, then make your way to the building located in the Center of the yard. In there you will find the armor. 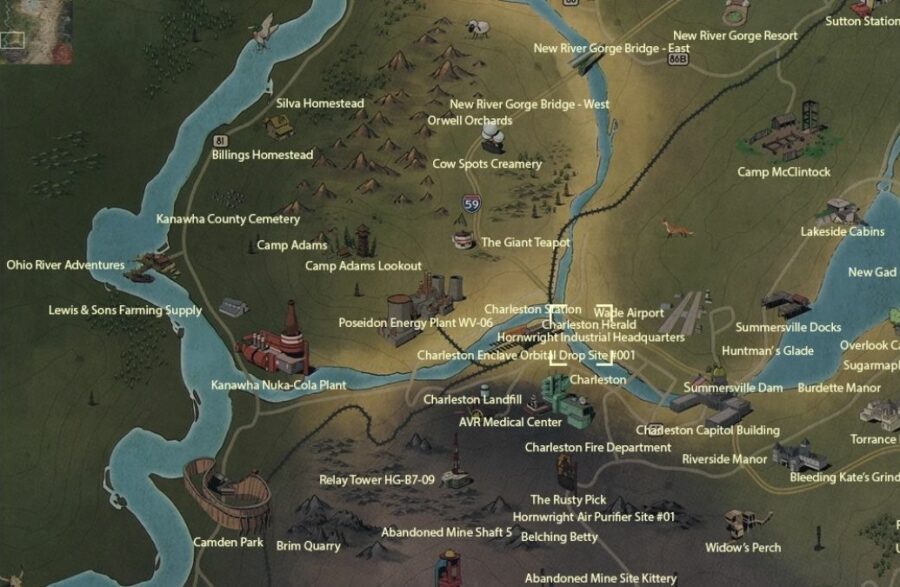 For this power armor you will need to commence a mission called The Motherlode. If you head to Charleston which is South over the river from Route 59 you should trigger the mission start. After accessing some key cards during the mission you will find the armor at the bottom of some stairs. You shouldn't miss it. 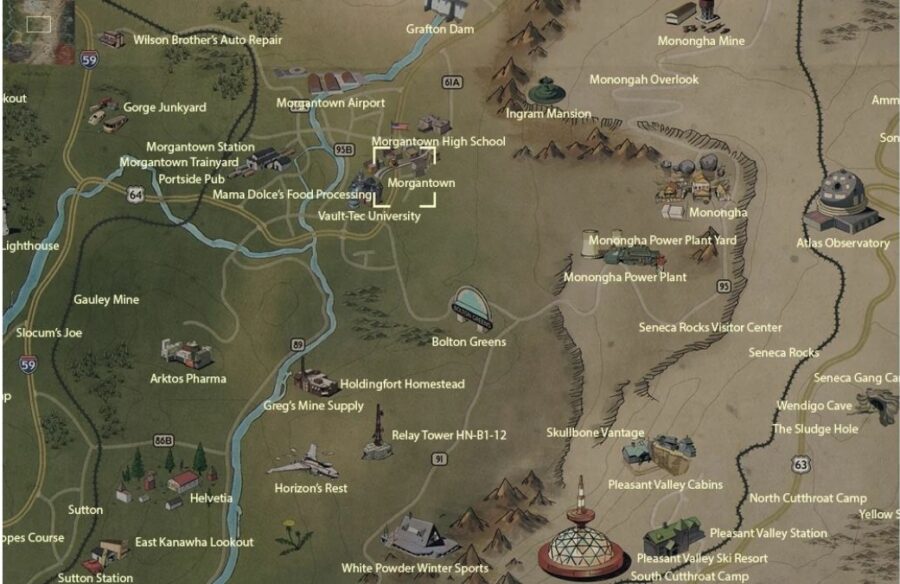 West of Morgantown and South West of Morgantown Airport you will stumble upon the Trainyard. Look for a watch tower on the West side that is between two warehouses. There will be a Green Army Surplus Carriage located just in front and in there you will obtain the power armor. 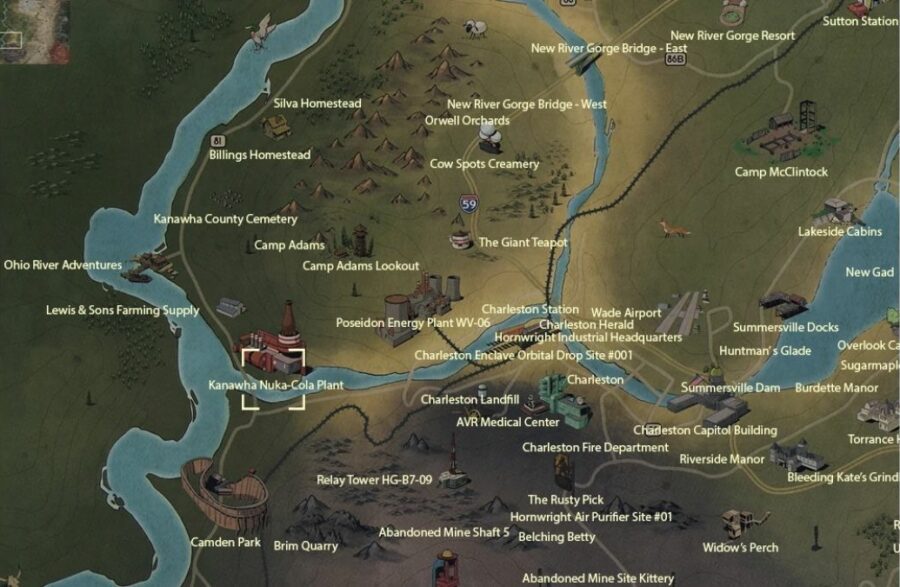 West of Charleston and North of Camden Park you will find the behemoth which is the Nuka-Cola Plant. It will literally stick out. Enter then building after some lock picking and search for the Basement, then for a large room containing a crane that's yellow. There will be some power armor situated in the corner.

Related: How to get Excavator Power Armor in Fallout 76 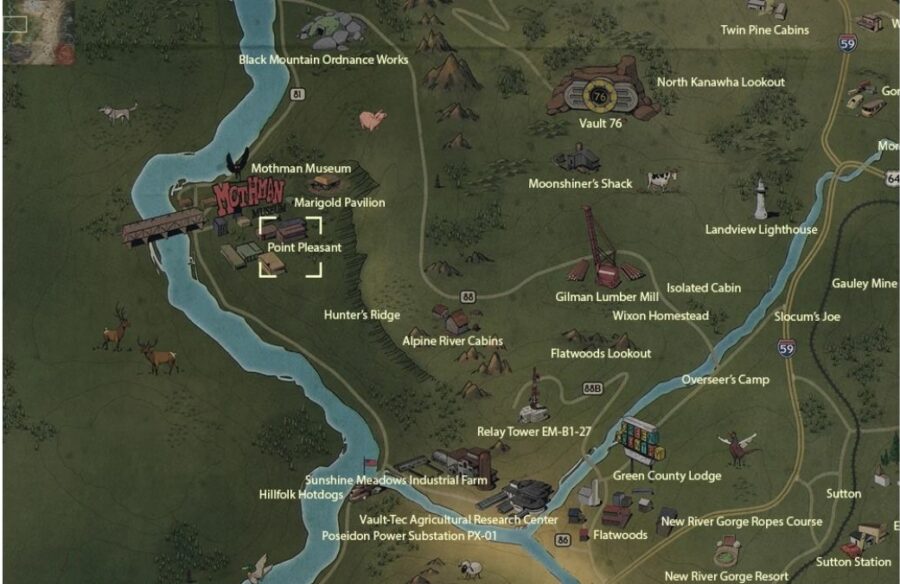 South West of good ol' Vault 76 you will come across Point Pleasant and the Mothman Museum. The 'M' of the Mothman sign is a good indicator of where you should head to. There will soon after be a Green Pharmacy, situate that on your left and go up the stairs. You will encounter another building with a smashed wall. Enter the building and go through to the other side. On your left there will be stair access to the roof, follow this. Next look for a wooden path atop a bridge, traverse this and when you encounter a fork in the path, take the right hand turning. Peak downwards and to the right to see a Red Sofa with some power armor near it. 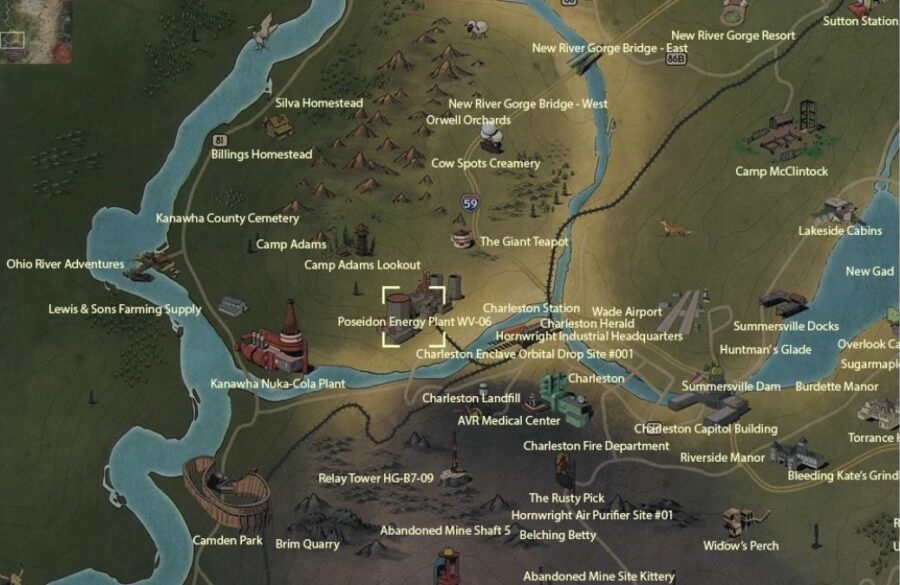 North East of the Nuka-Cola Plant you'll find the Energy Plant. Once there head for the largest building that has Blue Pipes, three doorways and army vehicles outside. Enter the building and head down the stairs straight ahead. Continue round the corridor and you will find a room with a Workbench along with the desired power armor. 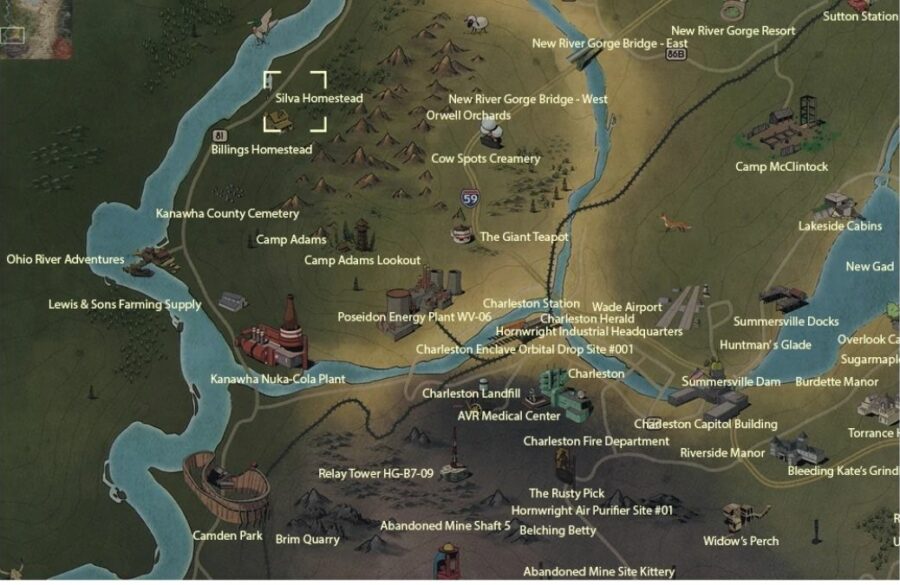 North of the Nuka-Cola Plant look for a round barn that has a Red Tractor indoors. The power armor will be in a frame towards the back of the barn. 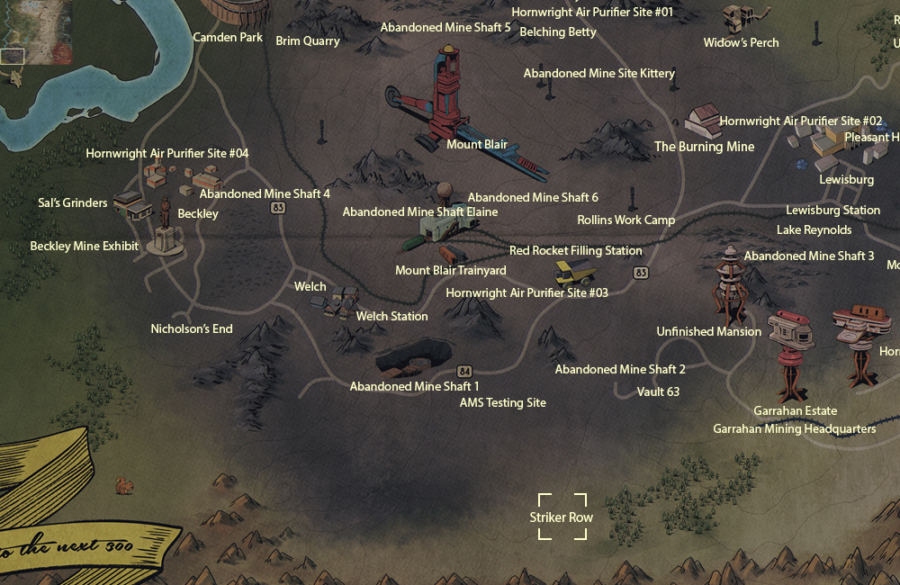 Head to Red Rocket Filling Station just below Mount Blair and pick up some power armor that's in there. Then go further South to find Striker Row. Look for a rock alcove close to road barriers and you'll find a second piece of armor in the fresh air (or as fresh as the post-apocalyptic wasteland can be!) 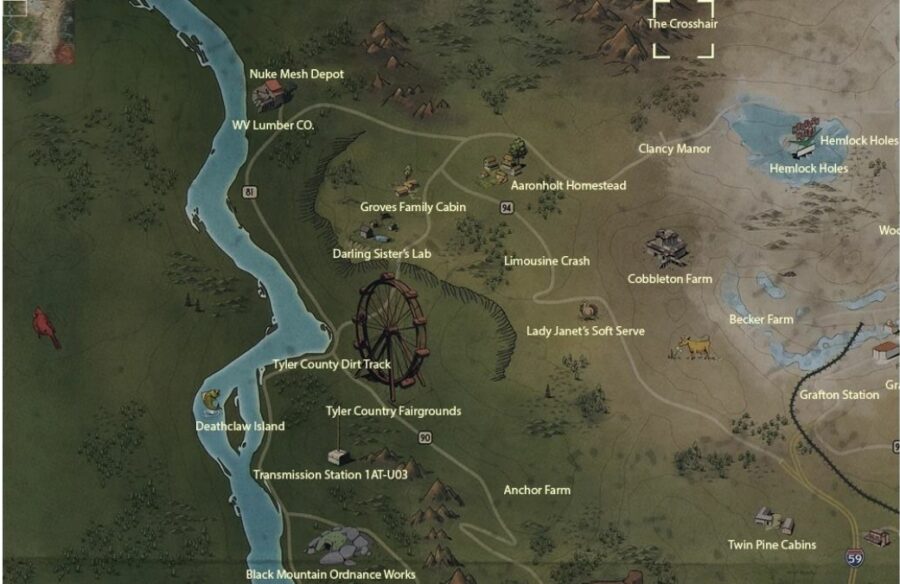 Go further North from Aaronholt Homestead and you will encounter the peaky Crosshair range. Find the cave nestled in this area (it is actually unmarked) and you will find Raider power armor within. 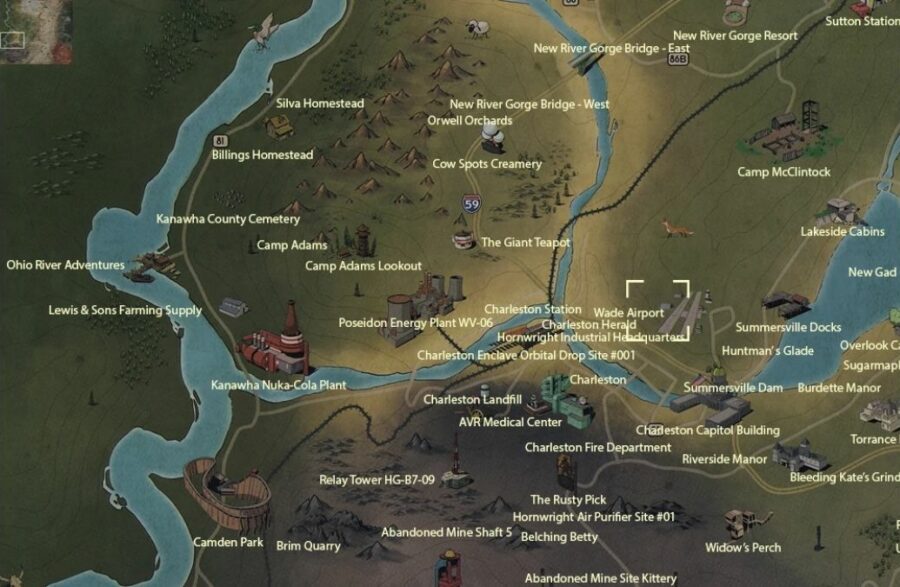 Wade Airport is very near to Charleston. There are two pieces to be found here so make sure you get them both! Head to a hangar that is by the Flight Tower at the Northern end of the runway and you will find armor in the hangar. Next, go to the Southern end of the runway and search for a Blue Trailer, this will also include some armor within. The door does require a level 2 lockpick skill but is pretty easy to get into. 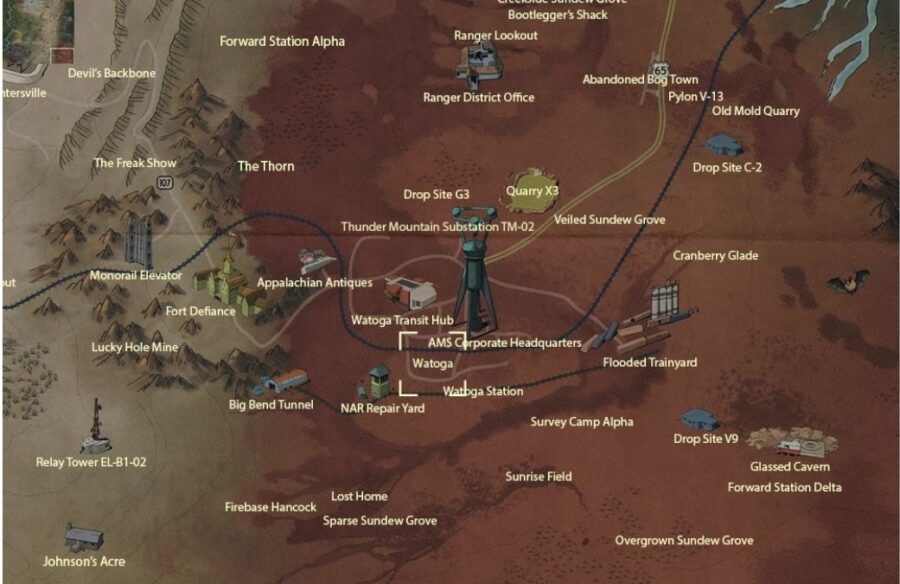 West of Drop Site V9 you will encounter Watoga, look for a crashed Vertibird. Next to it you will find some power armor just laid out on the floor. Also check the Emergency Building close by to find some more on the roof. 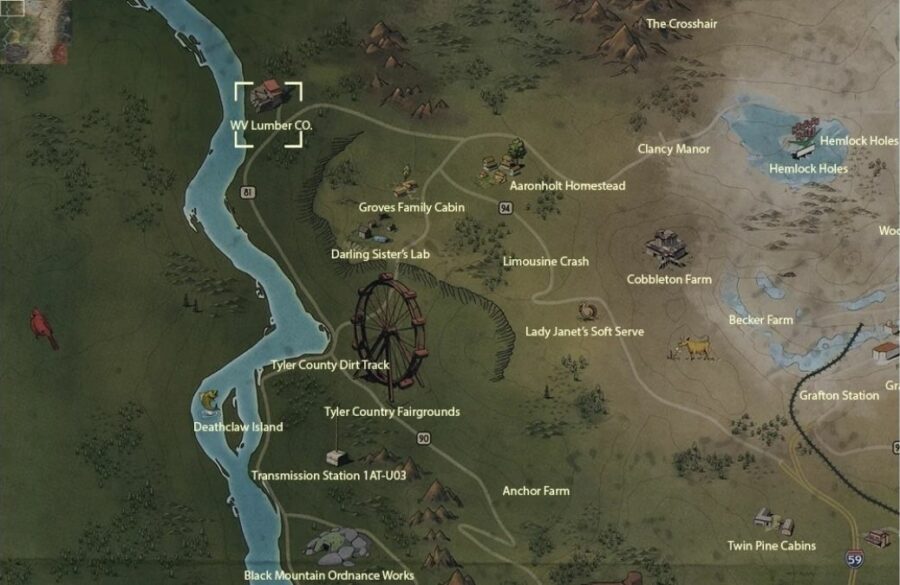 Slightly lower East of the Crosshairs is where WV Lumber Co. is located. Inside the Lumber Mill you'll find the power armor, but not before you encounter some Super Mutants.

There you have it! All of the locations to get power armor so that you can be suited up with the best gear for your travels along the Appalachian wilderness.

Still looking for more Fallout 76 help? Check out all the workshop locations in Fallout 76. Some will crossover with the power armor locations!