Our Collect Fortnite Letter Locations Guide features a look at all of the available ares where you will be able to find letters towards the Alter Ego Challenges. These are used to complete the "Collect F-O-R-T-N-I-T-E letters in Loading Screens" challenge. You will want to complete this one, because once you grab all of the letters, you will be rewarded with the mystery skin for the Chapter 2: Season 1 Battle Pass!

In Chapter 2: Season 1, Epic has decided to get rid of battle stars and just have experience instead. This is a nice way to simplify things, because season level and battle stars were basically the same. When you go and find a letter each week, you will earn 52,000 XP which is the equivalent of completing a challenge in a mission.

The Mystery Skin for Season 11 has been revealed and it's the Sorana skin! Check out a look at all of the previous mystery skins right here.

Here's a full map with all of the Fortnite letter locations you'll currently be able to find. Some of them aren't unlocked yet, but because the loading screens get leaked, we do know where the letters will be spawning. You won't be able to collect these until the challenges for that particular letter are released! We'll update this map further once more loading screens are revealed! You can click to enlarge the map, and we have more detailed instructions for each letter below. 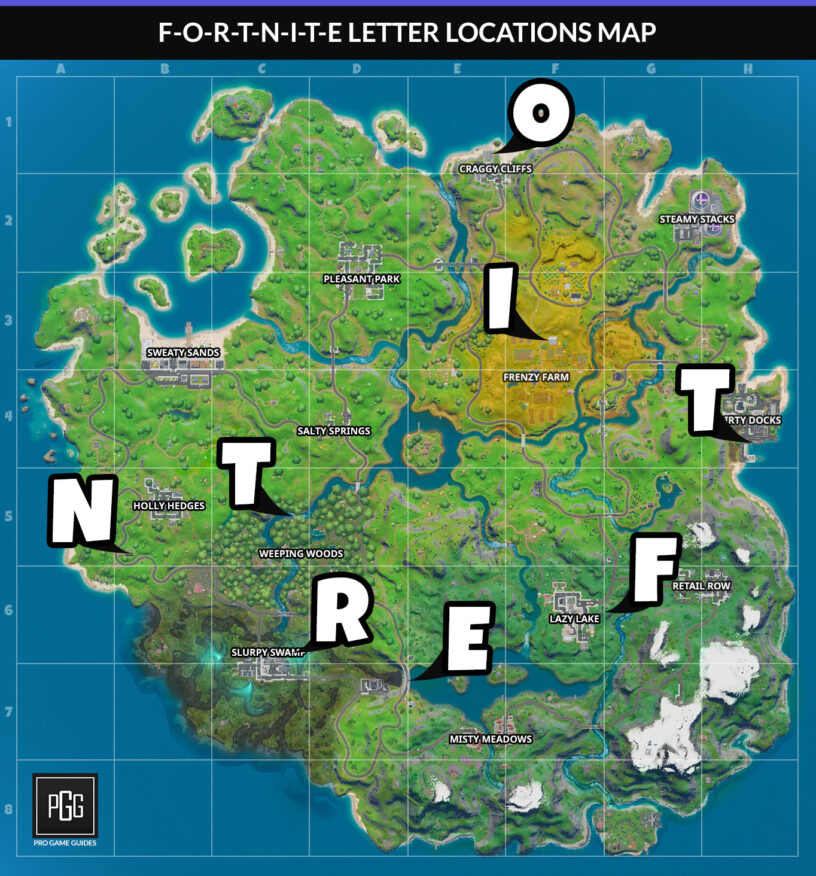 Here's where you will find all of the letter locations once they are available. Each week a new set of challenges unlock that you will need to complete. If you finish eight of them, you will unlock the loading screen for that week and you can then find the letter. We will always have the current week's location available, and will sometimes even have future locations that aren't in the game yet! When patches hit, we generally get a couple of the loading screens leaked, so we can have the locations already available for you. 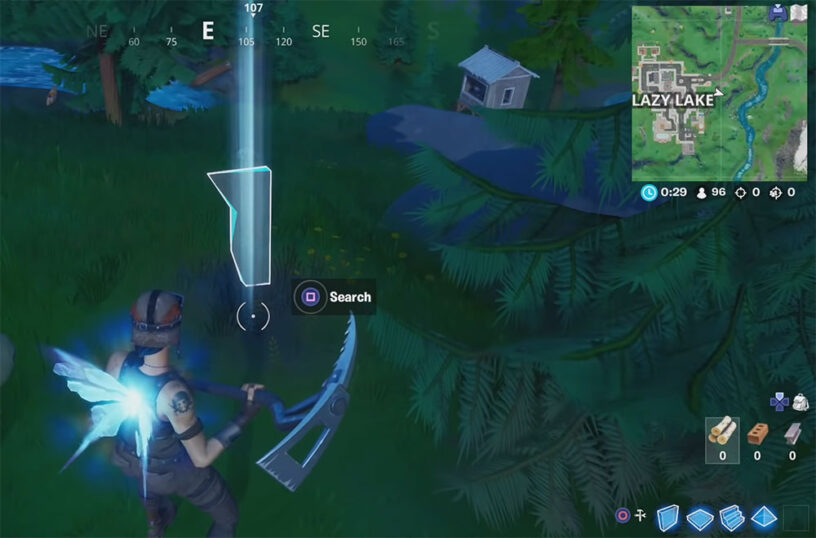 Once you've completed eight challenges in the Open Water Challenges Mission, you will receive the Open Water loading screen! This shows off the new fishing mechanic, as well as the Outcast and Turk vs Riptide skins. 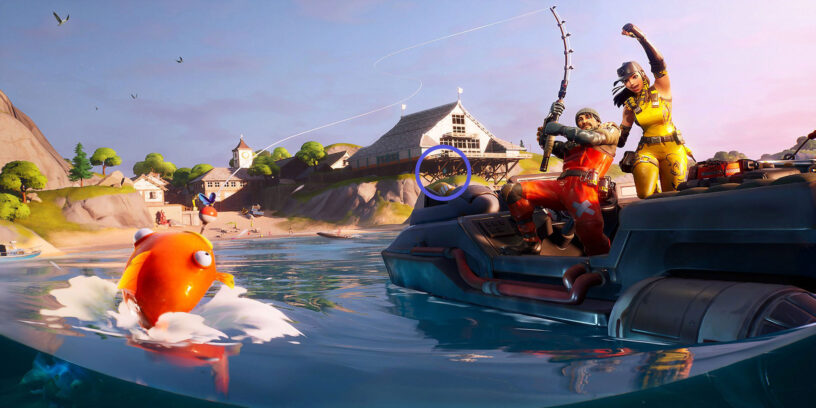 You'll find the letter O on the northern part of the map up at Craggy Cliffs. There's a huge building there with some scaffolding and a deck area. Right under this platform will be the letter you are looking to find!

Make sure you look under the decking where all of the scaffolding is! It will be tucked away under there. 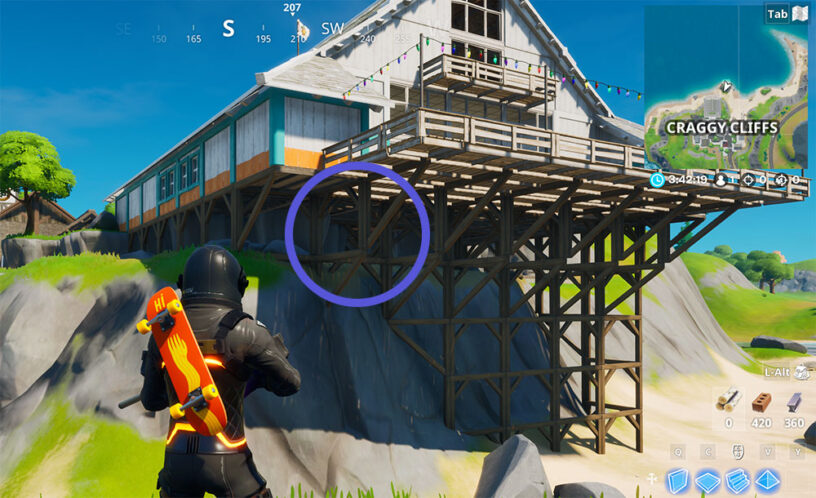 Once you've completed eight of the Forged In Slurp challenges, you will receive the Forged In Slurp loading screen! This shows off the new Rippley vs Sludge skin, and it appears that he was created due to the slurp runoff at the Slurpy Swamp. You might want to think twice before eating fish out of that area! 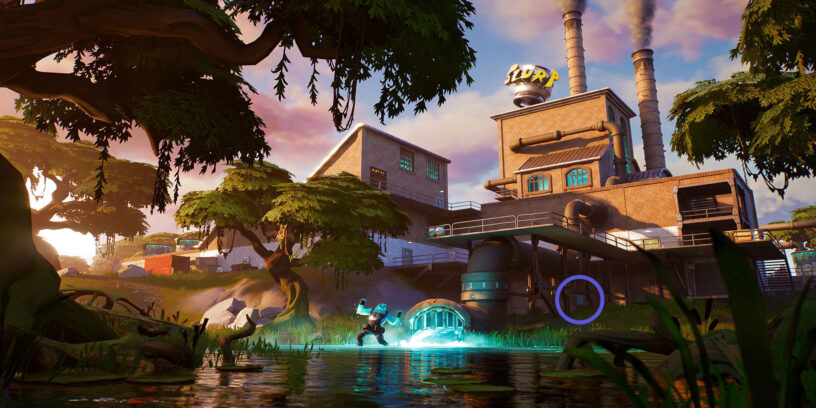 The R is located on the eastern side of the Slurp factories at the Slurpy Swamp.

It's over right next to the pipe that is spewing out toxic slurp into the river. You'll need to go under that huge pipe to find the letter. 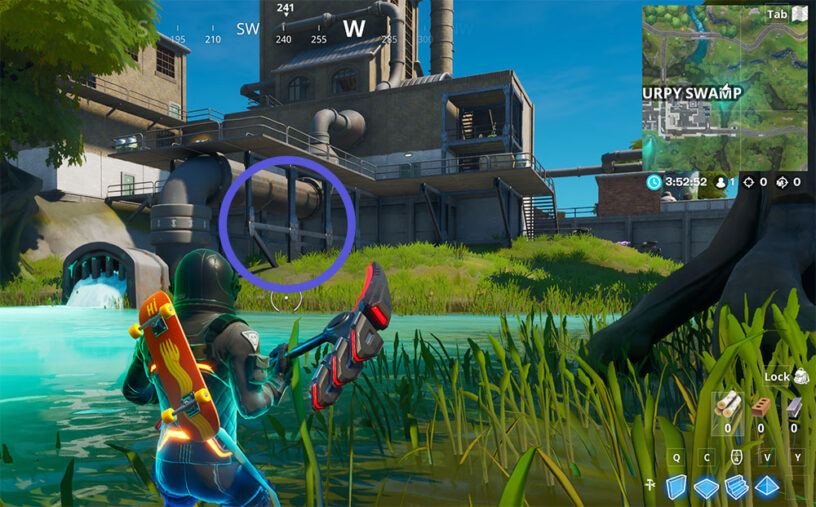 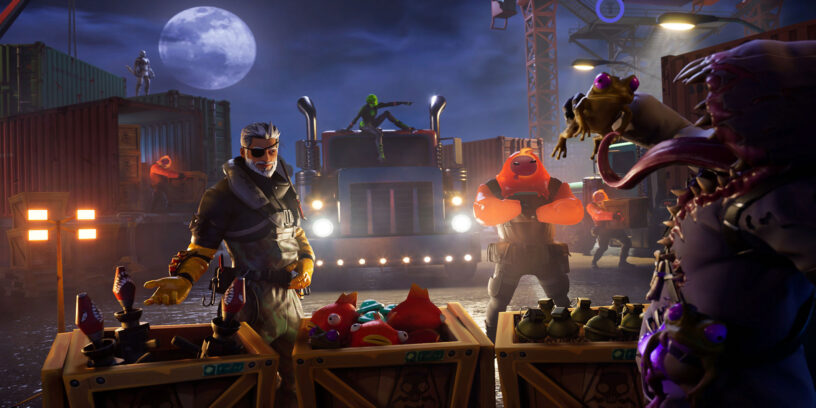 The T is located on scaffolding between the large cranes at the Dirty Docks.

You'll find it on the big middle platform, it will be located on either the left or right side after you come up the stairs. The cranes are hard to miss, it's big and orange on either side! 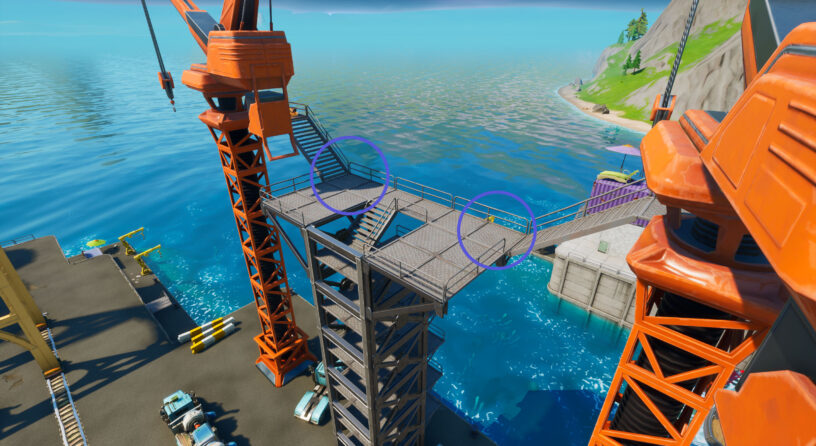 Once you've completed eight of The Lowdown challenges, you will receive The Lowdown loading screen! This looks to kind of being exploring the lore of the season where each of the cosmetics have an alter ego. The N can be seen on the left side of the image at the back of the hangar. 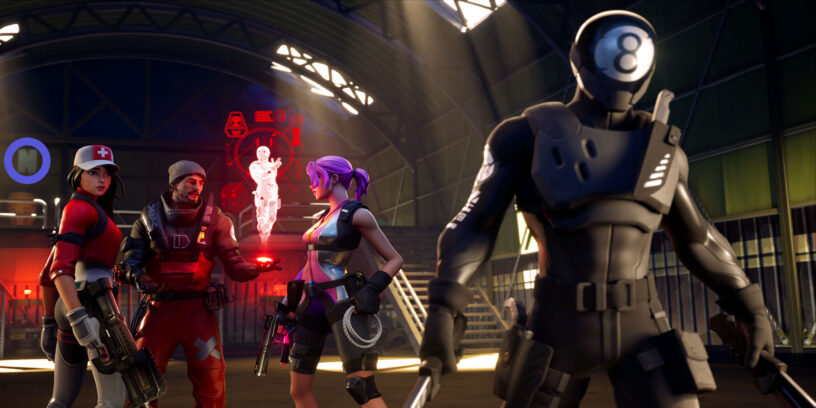 The N can be found southwest on the map near Holly Hedges.

The N is at a location you've probably already visited, because it's at the E.G.O. Hangar. Inside of here you'll want to go to the back of the hangar and up the stairs. The N will be on top of a couple of yellow barrels. 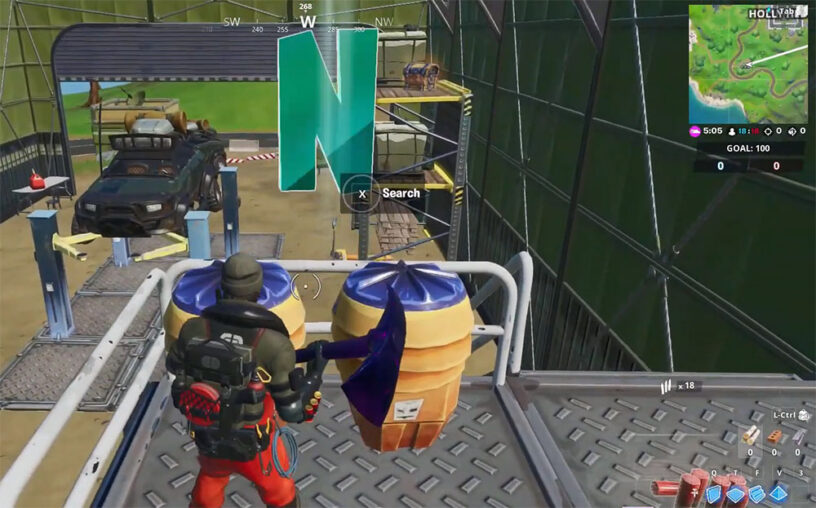 Once you've completed eight of these challenges, you will receive Hunter And The Hunted loading screen! We get introduced to more of the story in these, it looks like the alter egos of the skins are up to no good. The most important thing is that Rippley looks cute trying to eat an apple in quiet. To find the letter, look to the center of the image towards the top. 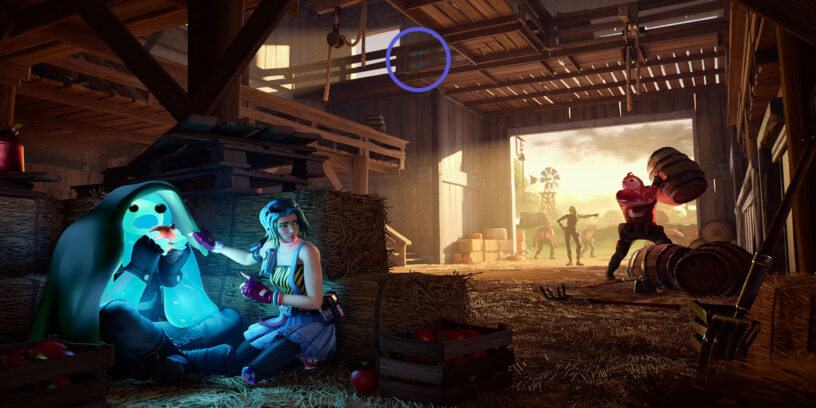 The I can be found over at the eastern part of the map at Frenzy Farm.

The I location is on the third tier of the big barn at the north portion of Frenzy Farm. Run up the stairs and you'll see it near the window that's facing the front of the barn. 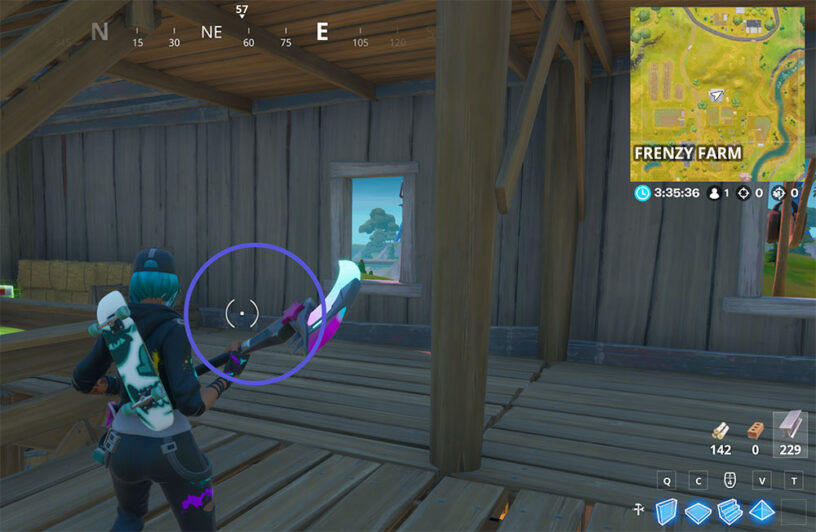 Once you've completed eight of these challenges, you will receive the Trick Shot loading screen! The 8-ball versus Scratch battle is taking place in an idyllic forest with a stream nearby! This is the second T you will need to collect, so don't confuse it with the first one! If you look to the center of the the image you'll see the letter T sitting under the bridge. 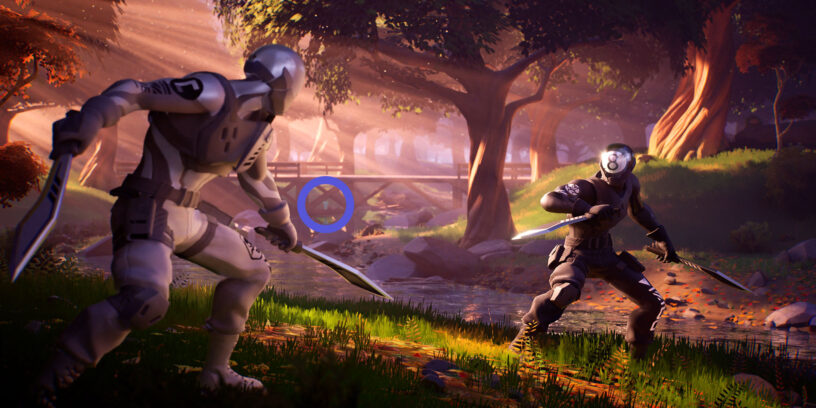 The T location is under a bridge in the northern portion of Weeping Woods.

You can see it pretty well on the map, look for a white water section with some wood planking. 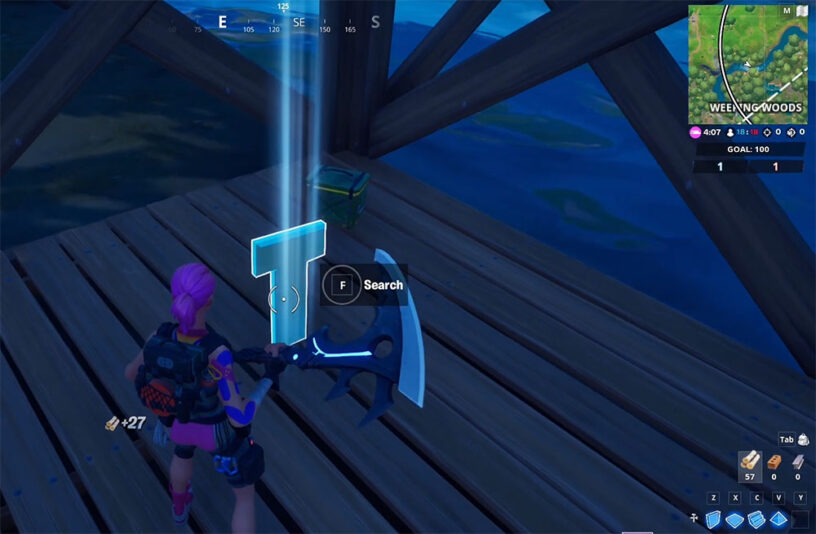 Once you've completed eight of these challenges, you will receive the Dive! loading screen! It looks like the alter egos are going to battle in this screen, and you get a whole lot of Sludge skins trying to take down our heroes! If you look over the light post on the dam, you'll see the letter we're looking to obtain! 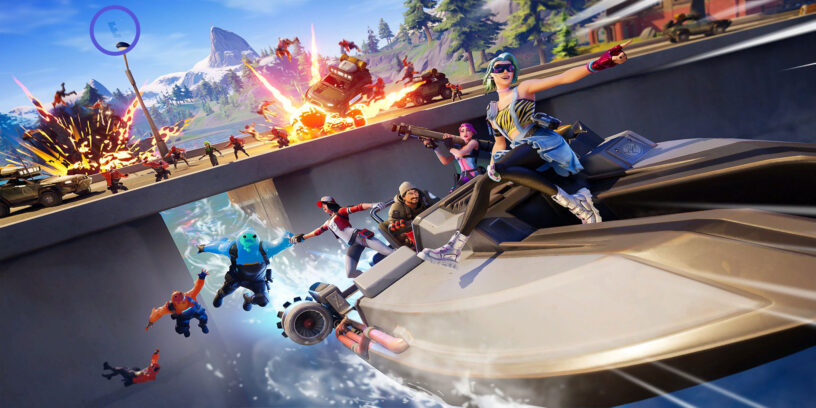 Just head east of Slurpy Swamps and on top of the big dam there.

The E location is above the light-post on the Hydro 16 dam! 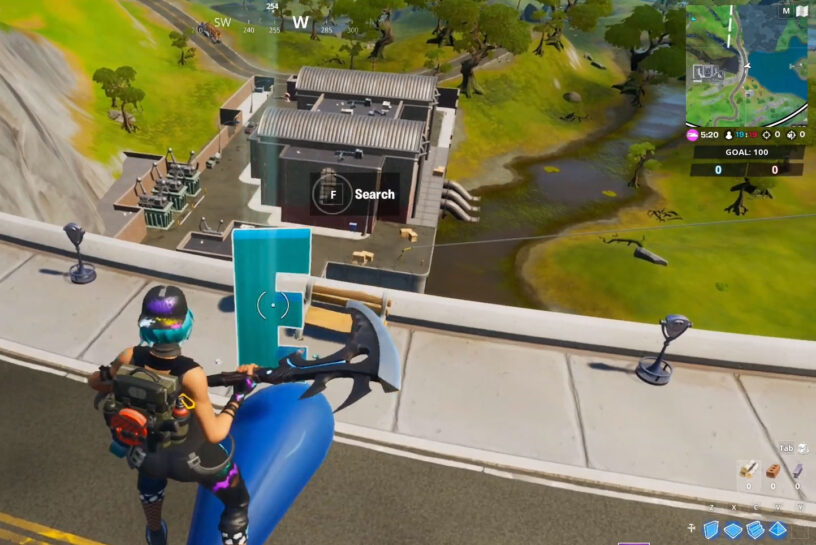 How to see how much money you’ve spent on Fortnite