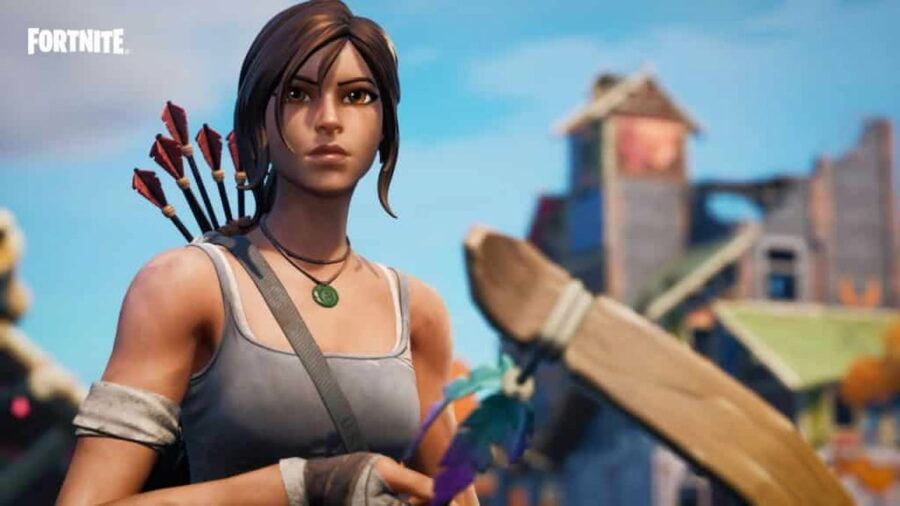 It's no secret that Fortnite has taken the world by storm. The uniquely styled battle royale has positioned itself atop the genre and has made some serious partnerships with other heavy hitters in media. From Disney to DC, it seems that everyone wants a piece. This is nothing but a positive for players as we get the equivalent of digital action figures to play with. So, let some of our favorites adorn your device when you're not able to play.

It's making a drop and each of the items is a treasure in its own right. The Supply Llama makes a great background for any device.

Zuri is fierce in this wallpaper! Here she is, training hard in the gym before dropping in on the next battle royale.

Stealth, secrecy, and brutal efficiency. The Order is destined to become the next member of the Seven and won't let anyone stand in her way.

Who says that dreams can't come true? Maria Lopez, otherwise known as Chica, is an incredibly popular streamer known for her bilingual streams and love of Fortnite.

The Multiverse of Madness comes to Fortnite with Scarlet Witch and Dr. Strange leading the charge. Both Wanda and the Sorcerer Supreme have more tricks than one can shake a broomstick at!

Star Wars has been one of the more popular collaborations Fortnite has done. This wallpaper pays homage to some of the many skins to grace the shooter.

Marc...no, Steven...no, Moon Knight joins Fortnite in one of two skins. This classic garb sees the mysterious hero clad in the garments of Khonshu.

Mysterious and clad in the night, Sorina puts her twin rapiers to deadly use on the battlefield. This skin is highlighted beautifully with this striking wallpaper.

While collecting your favorite heroes, villains, and other characters is no doubt part of Fortnite's appeal, collecting additional skins and recolors makes that all the more enticing. Epic Games highlights several of these in this wallpaper.

Her royal neighness makes her regal debut in Fortnite as a glider that majestically carries players safely down to the ground. Though difficult to truly capture her beauty, this wallpaper comes as close as any.

Related: Will there be an end-of-season event in Fortnite Chapter 3 Season 2?

Windwalker Echo looks supremely confident in this wallpaper. With a gorgeous background that only encapsulates her stoic frame and draws all of the attention to the center, this is easily one of our favorites.

Any game worth its salt leans into Halloween with all manner of celebration. Fortnite is no different with decorations adorning the map and costumes becoming available for characters to get into the spirit.

Fashion. Style. Lip gloss. Good looks. All are equally important when it comes to the world of high-end fashion. Balenciaga embodies this in its collaboration with Fortnite.

Fortnite is no stranger to unusual partnerships. Seeing the inclusion of Bruno Mars and Anderson .Paak is only a testament to that.

When she's not claiming the number gold in the Olympics, snowboarder Chloe Kim is securing the number one spot in Fortnite. This skin and wallpaper capture her awesome sense of style perfectly.

When Naruto and Fortnite collided, it was a shockwave felt around the world. Fans delighted in taking their favorite ninjas into battle and wrecking opponents with their Jutsu.

It doesn't need to be March to appreciate this skin. From the sequins to that gorgeous shade of green, this wallpaper has it going on.

Channeling his inner Lebowski, Jonesy has clearly decided to take it easy after having been a Fortnite mainstay for so long. While the base look is iconic, all the tactical holsters seem to clash.

Friends that TP towers together stick together. This wallpaper is lighthearted and wholesome in its depiction of friendship. It reminds us all to take a step back every now and then to let our hair down.

The two best X-Men finally joined Fortnite in a fantastic two-pack. This wallpaper highlights the dynamic duo in their fully-rendered glory.

Related: How to jump nearby a Seismometer in Fortnite

The Universal Monsters jumpstarted an entire genre in horror. These iconic monsters stand out in any iteration they take.

Batman and crew drop in to show Marvel they're not the only heroes in Fortnite. Joining him are Beast Boy, Wonder Woman, the Flash, and Harley Quinn.

Love is in our hearts and so is this wallpaper! The Queen of Hearts and her minions sum up the holiday better than most games with these snazzy looks.

Just because one is a henchman doesn't mean one needs to be lacking style. These two hit the mark in style and on the field.

Kitty cat samurai? What's not to love about that? The Azuki skin shows off cuteness with his serious little face.

Hawkeye and apprentice Kate Bishop are on the scene in this action-packed wallpaper. Following the debut of his titular show on Disney+, Hawkeye continued that trend of popularity in Fortnite.

It always helps to have some good jams at the ready when hitting the slopes. Mel knows this all too well and it is abundantly clear in this wallpaper.

The house of Marvel has many heroes in its roster and more than a few of them have made their way into the popular battle royale. It's always a good idea to see what offerings the store has in order to complete your collection.

How does one top Dwayne "The Rock" Johnson joining Fortnite? Why with Spider-Man, of course!

Embrace the Autumn spirit with this serene wallpaper. With harmonic colors and vibrant character designs, these skins capture the essence of the season well.

For more Fortnite goodies, check out Where to download personnel files from the old IO Servers in Fortnite on Pro Game Guides.