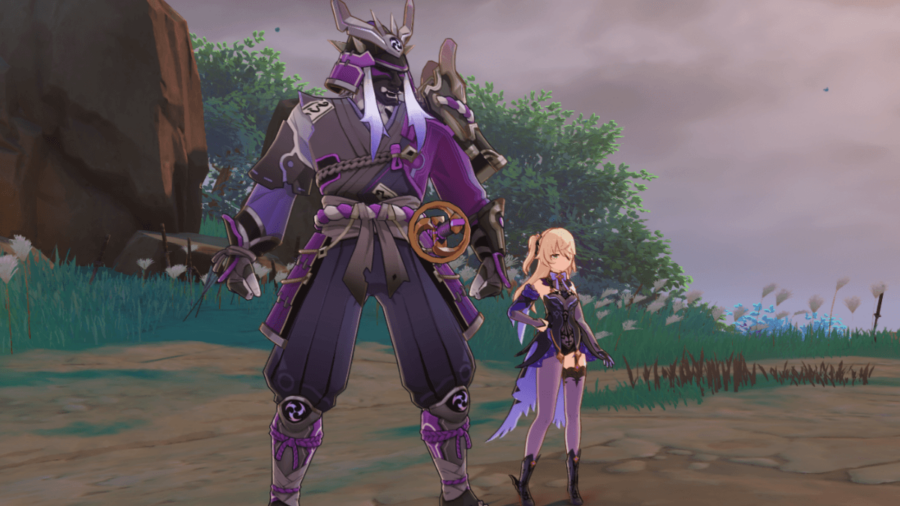 To begin the Genshin Impact world quest Dreams of Sword Art, you must first have completed Ritou Escape Plan.

Trigger Dreams of Sword Art by speaking to the nameless samurai at the spot marked below on the map.

The samurai, who suffers from memory loss, challenges you to a duel. You'll need to defeat him in less than one minute, but this is an easy match.

The fight triggers a memory of two children sparring with swords. Travel to the small isle west of Kujou Encampment, then go to the children's house (easy to locate) and up the steps as described by the samurai. There, you'll find the first sword.

Returning the sword to the samurai prompts another rematch. As before, defeat him in less than one minute.

The next awakened memory is that of drinking wine with other warriors in "a great encampment."

Speak to the soldiers in the highlighted area at Kujou Encampment. Matsudaira will offer information on the samurai's past, and gives you a jug of wine.

Return with the wine and prepare for a third rematch, which you must again complete in less than one minute.

After fighting the samurai for the third time, you'll need to find the second sword at Nazuchi Beach. Defeat all of the enemies there and draw the sword from its post, as shown below.

When the samurai receives this sword, he will lose control of himself and attack. This final rematch is much tougher than the previous three—the samurai can regenerate his health by charging his sword and will strike harder. You'll need to defeat him in less than two minutes.

Along with earning the "Why We Fight" achievement (five primogems), completing Dreams of Sword Art offers the following rewards:

After finishing this quest, you can return at any time to spar with the samurai. Defeating him before he goes berserk will result in earning another hidden achievement "Oowazamono."