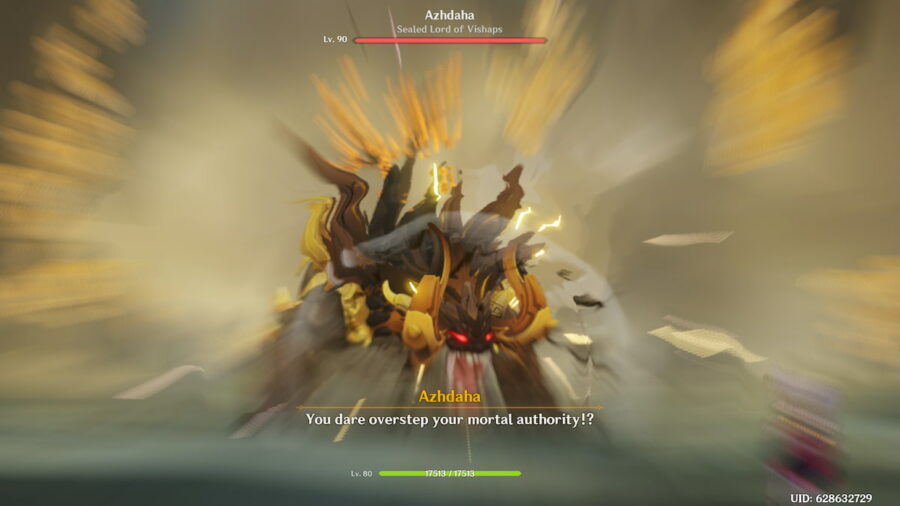 Azhdaha is a weekly boss in Genshin Impact that drops unique materials for upgrading many characters' Talents. They have two of four elemental forms they take during the fight that can deal continuous damage to characters without a shield. Using the right team composition, this fight can be done easily both solo or in co-op.

How to unlock Azhdaha in Genshin Impact

The weekly boss Azhdaha is first encountered during Zhongli's Act II Story Quest. This can be found by going to Quests and navigating to Story Quests. The subsequent menu shows Hangout Events and Story Quests that require the player to use Story Keys to unlock. These keys are earned by doing the daily commissions. A total of eight commissions must be completed to earn a single Story Key.

Azhdaha will take two of four different forms during the fight when reaching different HP thresholds. These forms can be seen when looking at the entrance to the Trounce Domain and are fixed for the entire week until the Domains are reset. These are Fire, Electro, Hydro, and Cryo forms, each with different ways of dealing their respective elemental damage.

Upon defeat, Azhdaha will reward players with three unique items that can be used to upgrade specific characters' Talents. These are the Dragon Lord's Crown, Gilded Scale, and Bloodjade Branch. Azhdaha shares the same loot pool as other Trounce Domain bosses apart from this and is able to reward players with the Berseker, Instructor, Exile, Gladiator, and Wanderer's Troupe Artifact sets, weapon Billets, Dream Solvent, and Varunada Lazurite, Vajrada Amethyst, and Prithiva Topaz gemstones.